Boris Johnson has been accused of a “clear misuse of official statistics” by the head of the UK Statistics Authority, Sir David Norgrove.

On Friday, the Foreign Secretary laid out his vision for Brexit in a 4,000 word Telegraph article. The intervention was widely interpreted as an advertisement of his interest in replacing Theresa May, and was condemned by Scottish Tory leader Ruth Davidson for coming on the day of a terror attack on the London Tube.

Johnson wrote:  “Once we have settled our accounts, we will take back control of roughly £350 million per week. It would be a fine thing, as many of us have pointed out, if a lot of that money went on the NHS.”

“I am surprised and disappointed that you have chosen to repeat the figure of £350 million per week, in connection with the amount that might be available for extra public spending when we leave the European Union,” wrote Sir David Norgrove. “This confuses gross and net contributions. It also assumes that payments currently made to the UK by the EU, including for example for the support of agriculture and scientific research, will not be paid by the UK government when we leave. It is a clear misuse of official statistics.” 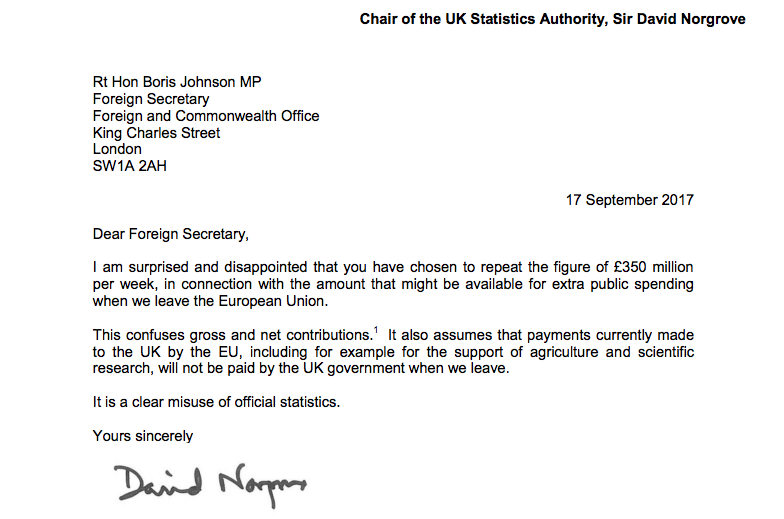 During the referendum campaign last year, the previous head of the statistics authority, Andrew Dilnot, made the same criticisms of the £350m figure. It was a key part of the Leave campaign, making the case that quitting the EU would leave Britain with more money to spend on the Health Service. However, fact-checking websites pointed out that it used our total contribution, ignoring the rebate we receive. It also assumed that the UK would make no budget contributions to the EU once we were no longer members. This is extremely unlikely, as Theresa May has already signalled her intention to remain part of several pan-European schemes, and maintain close security links.

The polite, but brutal, letter from Sir David Norgrove is a rare direct criticism of a senior politician by the non-partisan Statistics Authority. It signals quite how irritating statisticians find the continued misuse of the £350m figure. Johnson’s intervention – which has already attracted negative comments from several Tory MPs – now looks even more misguided.