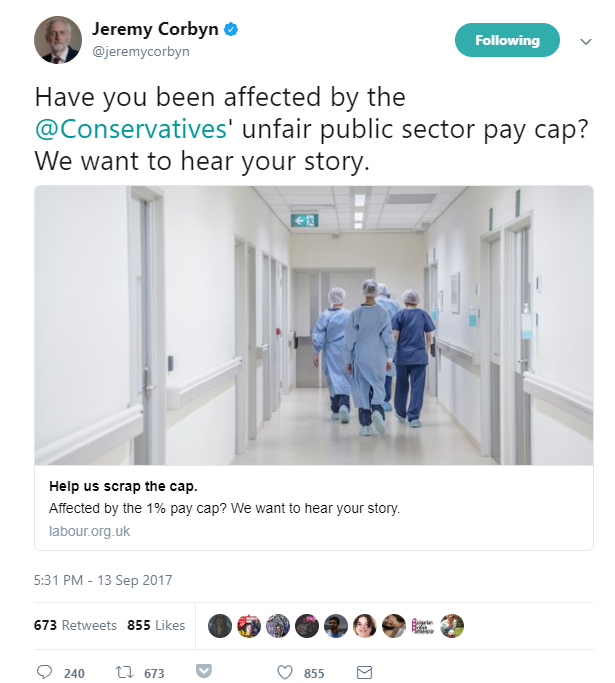 Here was the response from the Tory MP for Braintree James Cleverly. 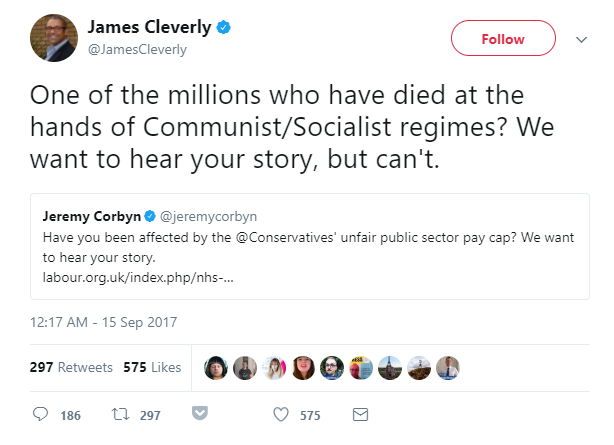 1) Is he saying that asking for a 2 per cent pay rise for nurses and firemen literally makes you as bad as the actual, literal Stalin?

2) No, but is he really saying that though?

3) Because that’s self-evidently ridiculous but I can’t work out how else to interpret that tweet.

5) …is Cleverly actually comparing the public sector workers whose pay his government is refusing to boost to the millions purged by Mao and Stalin?

7) I’m not sure Theresa May would like the fact you’ve just compared her government to Stalin’s, James.

8) I mean, it might affect your prospects for promotion, that’s all I’m saying.

9) If anyone can actually work out how paying nurses enough to keep up with inflation leads to mass murdering dictatorship, please do write in, I’m curious.

10) I’m not going to draw attention to Cleverly’s name, and the fact this tweet is a strong case against nominative determinism, because most of Twitter has already done that, and it wasn’t that funny then.

13) Seriously, though, what an amazingly, hilariously, catastrophically stupid take.

14) Is there a name for this Tory tendency to respond to every mildly social democratic proposal by shouting, “GULAGS?!”?

15) Given that it’s a sort of inverted Godwin’s Law, I suggest we name it “Cleverly’s Law”.

16) Cleverly’s Law states: “As any debate about Labour policy continues, the chances that a passing Tory will compare Jeremy Corbyn to Stalin approaches 1.”

17) I’m aware by this point that I’ve put far more thought into Cleverly’s tweet than he ever did himself.

18) I’ve not even put that much thought in, it’s a sodding listicle, but seriously what was he thinking here?

19) One of the millions of brain cells who have died at the hands of James Cleverly’s disuse? We want to hear your story but can’t, because you’re a brain cell and also dead.

20) Also, let’s be honest about this, James Cleverly just trivalised the daily struggle faced by the millions of people in this country who are watching their incomes gradually eroded by housing costs, inflation and the collapse of sterling brought on by a catastrophic Tory Brexit.

21) No, of course that’s not the sort of struggle that’s in any way comparable to the sort people experienced in Stalin’s Russia. But it’s still a bit rubbish to live through, and given that these people vote, it might be a good idea for politicians to improve their lives, rather than just laugh at the very idea we might try.

23) Six months ago, the Tories were 20 points ahead and the idea of a Labour government seemed laughable. Since the election, Labour have maintained a small but consistent lead. Yet the Tories are still acting like the idea that Labour could beat them is laughable.

24) But it’s not, is it? Unless something changes, Labour are now the favourites for the next election.

25) Something that, by all accounts, is holding the Tory party together right now is their shared fear of the words “Prime Minister Jeremy Corbyn”. So why aren’t they taking this stuff more seriously?

26) Why are they not trying to address the reasons people might be voting Labour, instead of laughing at them for it?

28) Why did they waste their summer arguing about a fucking bell?

BONUS 30TH POINT: A number of people have been in touch to complain I missed out the key fact that James Cleverly is the MP for Braintree, which James Cooray Smith describes as “Perhaps the first known case of doubling down on inverted nominative determinism.” Clearly, somebody in Conservative Central Office has a sense of humour.