The leaves are falling and the ballot boxes are being given a final polish. It should be peak Wahlkampf. (Trust us Germans to have a word for “campaign” which sounds like something that should be barked by a soldier in a black-and-white film.)

Yet, instead of “peak campaign”, with just days to go before polling day, we have an almost deadly dull one. Europe’s largest nation is being gripped by apathy. Even the politicians seem to have given up. Four years ago the then Social Democratic (SPD) challenger for chancellor, Peer Steinbrück, was so desperate to grab attention that he posed on a magazine front cover pulling the middle finger.

Instead Chancellor Merkel’s strategy of depoliticising the economic and social challenges Germany faces, and being endorsed as the steady mother of the nation, seems to once again be bearing fruit. Her Social Democratic contender has simply not been able to cut through.

So much so that for most voters the differences in policy agenda between Merkel’s Christian Democrats (CDU/CSU) and her main challenger Martin Schulz’s SPD are hard to detect. Not least because the SPD has spent the past four years serving under Merkel as the junior partner in a so-called “grand coalition”. It doesn’t make it easy to distinguish yourself when you have just spent the last four years agreeing in cabinet.

This is dangerous and careless in an age of economic and political insecurities where voter volatility has reached new heights, and the radical right-wing AfD is forecast to get a vote share in double figures – a tally that would make it the third strongest party in the Bundestag.

It’s business as usual for Merkel who has copied the playbook that so successfully delivered three victories: picking no fights and managing expectations. Why change a winning formula? She wants to carry on chasing the political legacy of her hero Helmut Kohl by securing a fourth term in office.

Once again the “safety first” strategy is paying off. Her CDU/CSU is on course with the polls showing a solid 17 per cent lead over Martin Schulz and the SPD.

Merkel may be cruising to victory, but Germany’s proportional electoral system means that she won’t be able to govern alone. Which means the most exciting question in the German election isn’t who is going to win, but with whom is Merkel going to form another government. All eyes are on the different combinations of parties that would provide the chancellor with a new majority.

As it stands, it is very likely that for the first time ever, the Bundestag will be host to six political parties. More dauntingly, it will also be the first time since the Second World War that members of the radical right-wing will be sat in the chamber. Arguably, this political setback may be seen as a failure of moderate forces to find the right political solutions for the refugee and financial crisis – the AfD is essentially the offspring of both – but it is also part of a wider populist surge in Europe and North America.

This fragmentation of the party system in Germany will make it a challenging task for CDU/CSU to form a coalition. However, with the return of the liberal, and pretty unashamedly neo-liberal FDP, Merkel can potentially revert to a traditional centre-right ally. This would please those in her party who have been sceptical of her socio-economic move to the left, and blame her for the rise of the right-wing populists.

A report by the University of Mannheim provides us with a useful, if firmly scholarly, political version of those dating compatibility quizzes we all like to do in idle lunch hours. It finds that a coalition between the CDU/CSU and the FDP would be a natural match. They would agree on 20 out of 38 of the main policy issues in German politics.

On which issues would coalition partners agree/disagree? 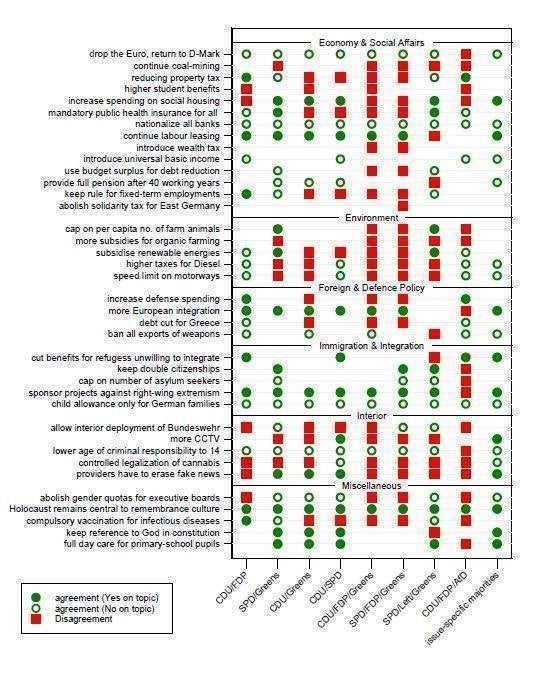 Only the other traditional “bloc coalition” between the SPD and Greens, which lifted Gerhard Schröder into the chancellery in 1998, would do better, matched on 24 issues overall. The study matches preferences on key economic, social, domestic and foreign policy of all major political parties and maps potential areas of conflict for all realistic coalition options. But polls currently show that neither of the naturally fitting centre-right or centre-left blocs would have enough seats to make a coalition work.

Which leaves three possible scenarios. The most intriguing would be the “Jamaica coalition” of the CDU, FDP and Greens (so called because the three party colours are the same as the Jamaican flag). Such an option has never been tried before at the federal level but is currently in power in Schleswig-Holstein. Alternatively, Merkel could follow the example of Saxony-Anhalt and try governing with her own CDU/CSU alongside both the SPD and the Greens. However, the new study finds that a three-way pact would be more prone to conflict and harder to negotiate than any of the two-party options.

More than two parties in a coalition would be an interesting novelty at the federal level, but disagreement on individual policy areas is expected to be considerably greater. The so-called “traffic-light-coalition” of the SPD, the Greens and the FDP would agree on 11 topics, yet disagree on 20 issues. And on top of issue-specific conflicts it would be more difficult to bridge ideological differences between parties at the different ends of the left-right dimension, as such between the SPD and FDP.

In the end it will all depend on how the numbers play out on election day this Sunday. The fact is that even minor shifts in voting behaviour from the current poll predictions would make a major difference to the options for government formation.

So, what should you look out for on election night? I would suggest keeping an eye on the liberals. What happens to the FDP’s vote share is crucial for whether they can return to their role as coalition queenmaker, after failing to jump the 5 per cent hurdle in 2013 and ending up with no seats. If the business-friendly liberals cannot deliver a majority for Merkel, the ball will be firmly back in the SPD’s court.

Gerhard Schröder used to say that a chicken is fat at the end (it makes more sense in German).

But if Schulz’s campaign does not pick up momentum in the closing hours of the campaign, and the Social Democrats’ vote share collapses to around 20 per cent, its leaders will find it difficult to justify another grand coalition to SPD members.

They will likely be once again asked to endorse any grand coalition with the traditional conservative enemy in a one-member-one-vote ballot. Many inside the party fear that another four years as junior partners to the strategically astute Merkel could be the end of the road for the Social Democrats.

Florian Ranft is a senior researcher and adviser at Policy Network