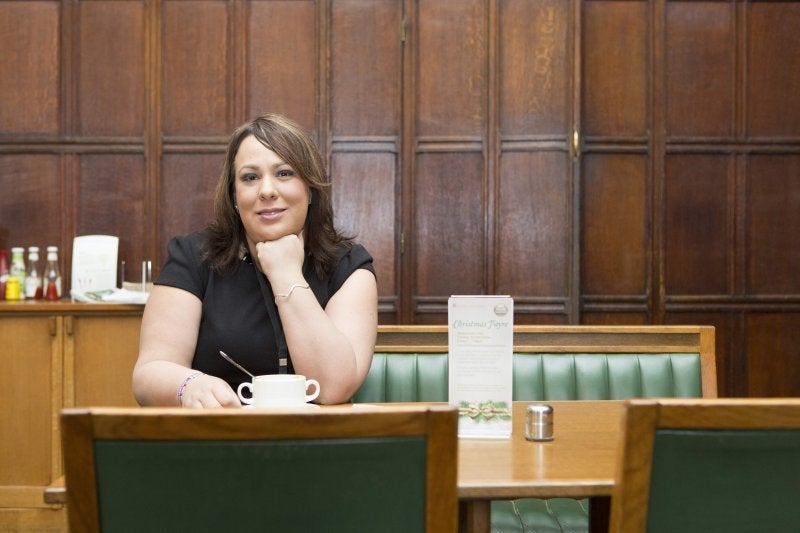 On becoming an MP:

“My first year as a Labour MP elected in 2015 has been a whirlwind! The experience is both empowering and humbling – I’ve set out to stand up and fight tirelessly for every man, woman and child in my constituency. My aim is to be a strong voice for people in the face of Tory attacks on everything we hold dear.”

On the experience of entering Westminster as a woman:

“Entering Westminster as a woman has had its highs and its lows. Just a few weeks after being elected I received rape and death threats on Facebook after calling for the community to unite following the news that a suicide bomber came from my Dewsbury constituency. I previously worked in the criminal justice system so I knew that threats are usually just that – threats – but I still felt quite vulnerable.

“At the other end of the spectrum, I’ve had the opportunity to get behind some great campaigns for gender equality. The highlight of these has been my amendment to the Finance Bill which would have forced an EU negotiation on the VAT rate charged on sanitary items, which has been dubbed the Tampon Tax.

“It’s good to shine a light on the deep rooted injustice of gender pricing. I’m glad that the Chancellor has been forced to pledge to eventually abolish the Tampon Tax altogether, but in the meantime the £15m raised by the tax is to go to women’s services through breast cancer and domestic abuse charities – services that ought not have been cut to begin with and should be funded by society as a whole, not paid for by women just because they have periods!” 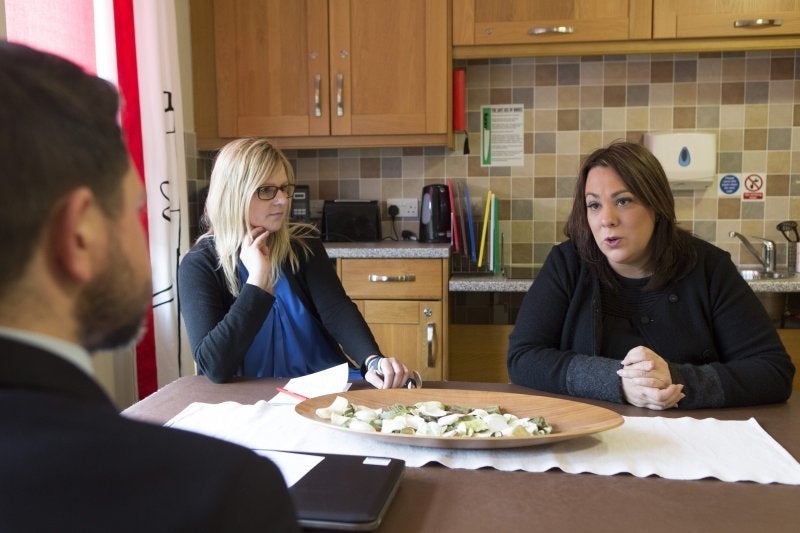 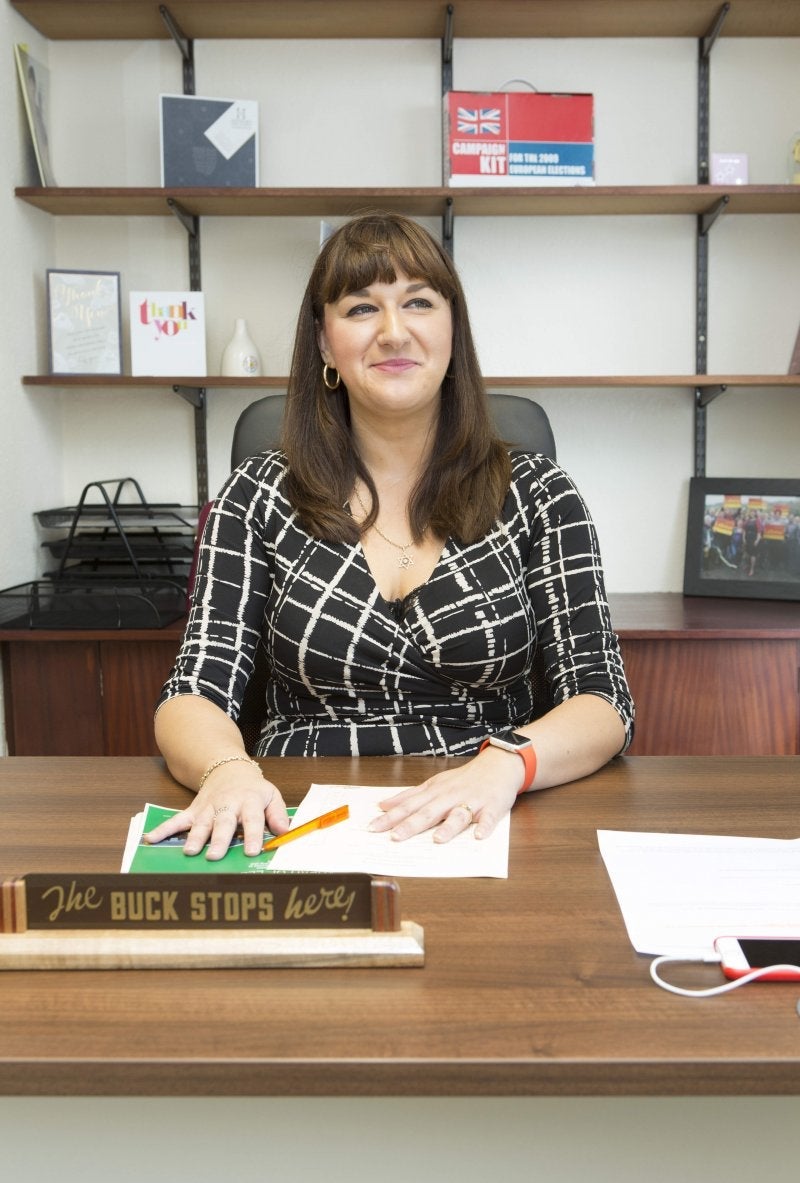 “If a week is a long time in politics, then a year is a lifetime, and nothing could have prepared me for the rollercoaster ride that being a Member of Parliament really is. Every day brings a new challenge, a new frustration (especially as an opposition MP) and a new sense of urgency – but also a sense of overwhelming privilege and responsibility.

“It’s a job with many challenges, the most immediate of which is learning to navigate the anachronisms (not to mention the geography) of the Palace of Westminster and the rules of the chamber. With its grand rooms, antique décor and the bore in the corner who views speeches as endurance tests, I occasionally feel like I’m living in an Hercule Poirot adventure, only without the dead body!

“But after a year of firsts – my first election victory, first speech in the House, first question to the Prime Minister – I feel more enthused, passionate and energised than ever about having this opportunity to represent my constituents as an MP for the party I joined as a teenager.

“It’s an incredible privilege to represent the people of Stoke-on-Trent North and Kidsgrove, some of the best and kindest you could hope to meet, but our area has huge challenges. The major industries that fuelled the city’s rise – pits, pots and steel – have shrunk or disappeared altogether, although ceramics remains our core industry.

“It is an area afflicted by poverty. Real, acute poverty. The kind that sees our children coming to school hungry and malnourished and that this government simply doesn’t comprehend. And that’s what drives me to do more, to do better, every day.

“My focus as an MP is on tackling child food poverty and securing well-paid, high-skilled jobs for my constituents. But the challenge is how I can use the different tools in the Commons to help promote these vital issues, and I’m learning as I go.

“I secured my first adjournment debate on Holiday Hunger to raise awareness of the plight of children whose family can’t afford to feed them during the school holidays. But that’s the beginning, not the end, of the campaign.

“I’m also working to highlight the threats facing the UK ceramics industry, which employs over 2,500 people in my constituency. China’s bid for Market Economy Status would be a disaster for the industry, just as it would for steel and many other sectors, allowing Chinese companies to flood the market with inferior goods at prices we can’t compete with. And we need only look at Redcar and Port Talbot to see how important this issue is for our manufacturing base.

“It’s an incredible feeling to sit on those same green benches my childhood heroes once sat on, and to speak up for the causes I believe in. And as a Jewish woman, from a working-class immigrant family, it’s incredible that only 100 years ago I would only have been able to watch from the gallery.

“But I want to do more than just participate. I want to make my community and my country better, and my greatest frustration is that of opposition. More than anything I want the Labour party to be sat on the other side of those benches, so that the next time a constituent comes to me in tears I can offer them more than a shoulder to cry on. I went into politics to change the world, not to protest about it, so gaining power must be our priority.”

“Since being elected as the Member of Parliament for Hampstead and Kilburn, opportunities for reflection have been rare. Following some challenging campaigns, the occasional rebellious vote, and the birth of my daughter, my first 12 months have been nothing if not memorable.

“When I was elected last May, my constituents put their trust in someone who has lived amongst them for almost two decades. In this spirit, my priority in Parliament has been to give our local issues a national platform.

“Parliament itself is a bizarre but wonderful place to work, however I am sure I am not alone in finding the rules and procedures of the Commons to be restrictive. It simply beggars belief that in 2016, MPs are forced to choose between caring for their newborn and being able to vote. My Early Day Motion to introduce proxy voting received cross-party support, but did not go further. The experience taught me just how difficult it is to achieve procedural reform in this place.

“Beyond these frustrations, I still have to pinch myself that the Palace of Westminster is my office. The building is itself impressive, and the sense of history in each debate underscores the significance our words have for the people we represent.

“A personal highlight has been to be chosen five times to put questions directly to David Cameron at Prime Minister’s Questions. The lottery system is cruel to some, but it has provided the opportunity to highlight crucial campaigns, such as Match4Lara – a community effort that saw a constituent secure a life-saving bone marrow transplant.

“One lesson of my first year has been to pick my battles carefully. Two major victories arrived towards the end in 2015, with my pressure resulting in the government to scrap the hideous criminal court charges, and to get a safe but private test for Down’s Syndrome made accessible for all on the NHS.

“I am proud of my first twelve months, but all too aware of the work ahead. The EU referendum provides the first landmark of my second year, the fallout of which will undoubtedly make for another interesting year in Parliament!” 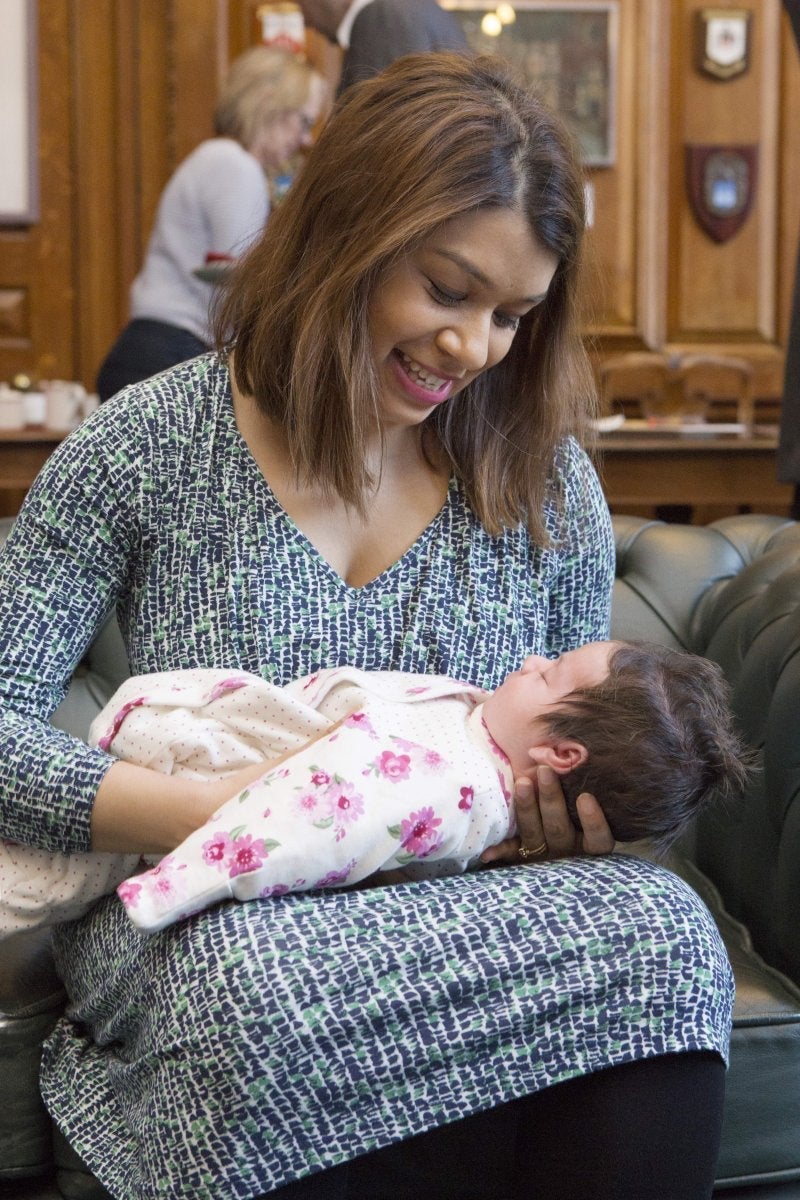 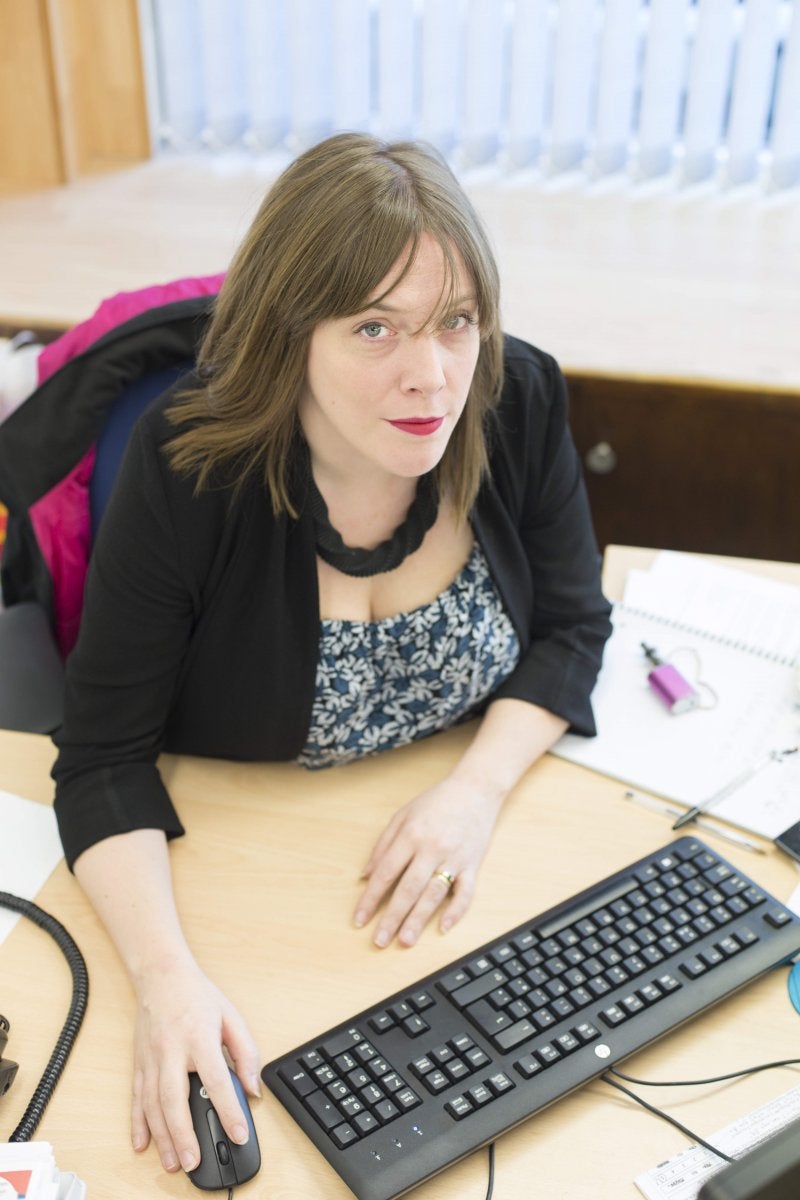 “I get asked a lot, ‘Is it what you expected?’ The truth is I don’t remember what I expected. I was not someone who came to Westminster a lot before I was an MP. I think I had been here three times. Being an MP is not one job. My experiences will be completely different to the next person. It is what you make it. No one tells you what to do, or how to do it. When you come here, as I did, from working in a close-knit team of people, it can be very isolating, but you just have to get on with it.

“It’s almost glib to say it, but I would always rather be in my constituency. I can get on with proper work, and meet and work with people who seem more straightforward. Because I came from working in a charity and advice service, I have modelled my constituency office on this. We have specialist surgeries for benefits advice, debt advice, housing and domestic violence. We have an open-door policy and want it to be like a community hub. I am happiest in my constituency office, there are always lots of people dropping in, it feels safe.

“Westminster is quite different. Getting actual work done is nearly impossible. The hours are long and it can feel like a lot of wasted time as MPs tend to run from one meeting to another, with no space to actually put pen to paper. I tend to write all my speeches, articles and do all my research in the evening at home as I rarely spend more than ten minutes in my office at a time. As a new MP it is hard to know how to focus your time in Westminster. For me I think it may have been easier than for others as I arrived here with a clear agenda to improve services for victims of domestic and sexual violence.

“I represent a marginal seat and this, combined with the unknowns of the boundary review, means I don’t know how long I will be in Parliament.  I think this makes my experiences different to people with safe seats. I live every day as if I have only five years in this place so I must make the most of my privileged position and do as much as I possibly can both in my constituency and in Parliament. I actually think this makes it more fun but also scarier. I take risks where others might not. Sometimes that pays off, sometimes it doesn’t.  One thing I know is there is never a dull day.” 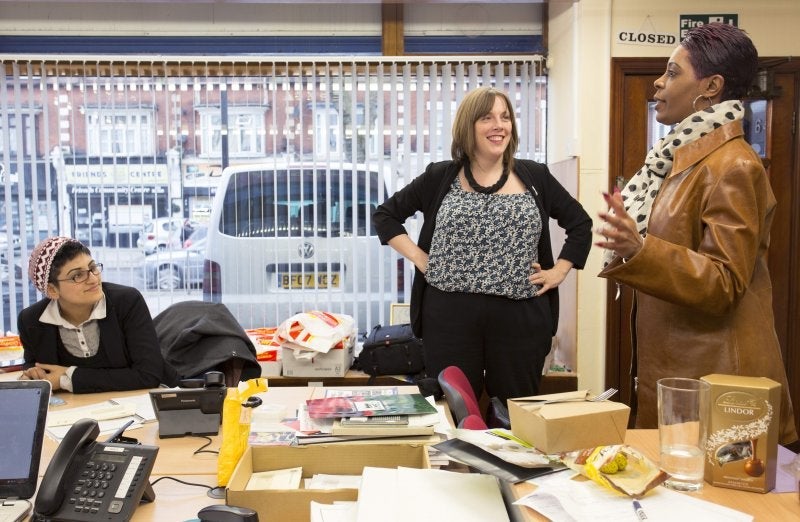 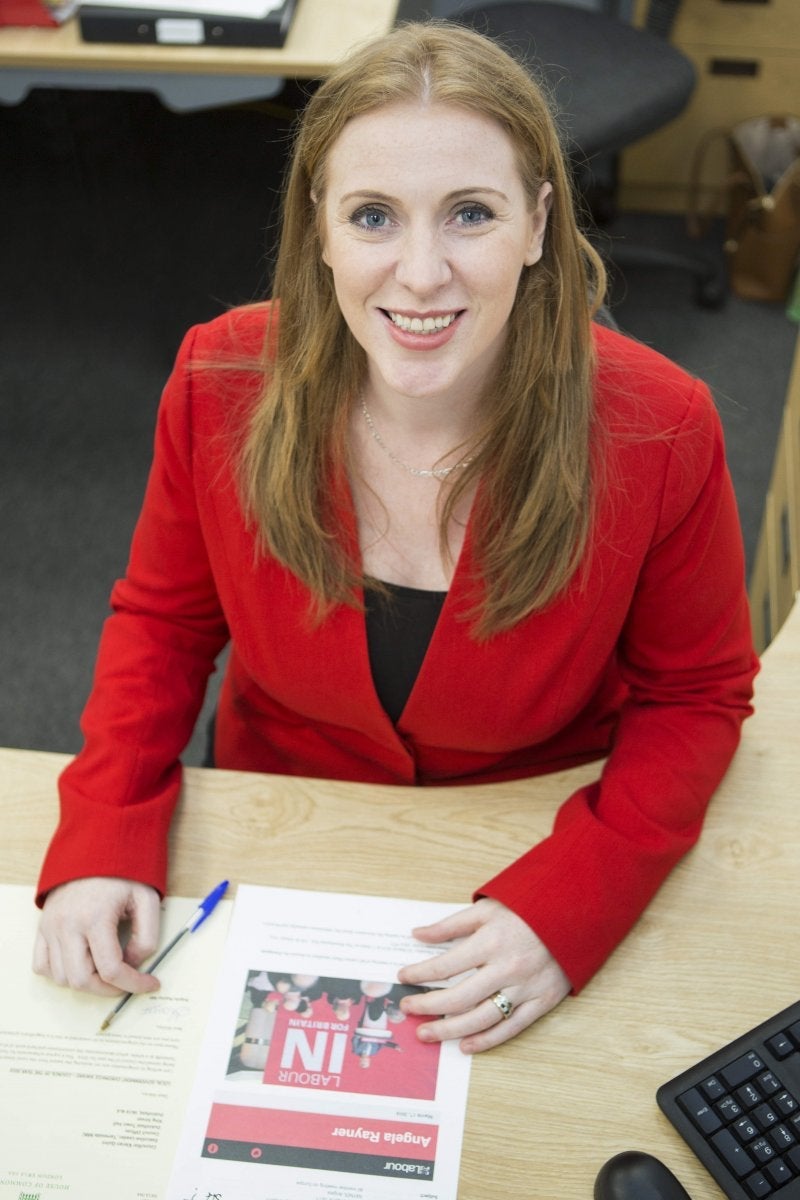 “Last May, I became the first woman MP elected for Ashton-under-Lyne in the constituency’s 180-year history. I am conscious of that landmark every time I stand at the despatch box in the House of Commons as Labour’s Shadow Pensions Minister.
As a former care worker and mother of three, I never dreamt to be in such a position. That’s why I can never forget the trust that thousands of people in my constituency have placed on me to speak up for them in the Mother of Parliaments. At times, it reminds me of Harry Potter’s Hogwarts, with its ancient, often baffling traditions, ceremonies and jargon. But we can do good – like forcing Osborne to climb-down on tax credits. Working with the WASPI women, fighting for pensions justice. These have been amongst the highlights. But with only 191 female MPs out of a total of 650, we still have work to do. For me, that begins at home in Ashton. Daily casework is my bread and butter, together with the weekly surgeries and meetings with constituents and local groups, many of whom are struggling to survive under Tory austerity. That’s what keeps my feet firmly on the ground, amidst all the Parliamentary flummery and bowing and scraping. And working to ensure that they have the opportunity to fulfil all of their potential.”