My earliest political memories are of Betty Boothroyd telling bumptious middle-aged men to be quiet during PMQs. Then, late last year, I interviewed her for Radio 4’s Week in Westminster. From the moment she swept into the studio in a cobalt-blue fur-trimmed coat, I was undone. What a woman.

Boothroyd had come to talk to me about the threat to parliament’s Unesco World Heritage status caused by high-rise developments along the South Bank. There are also concerns about the building itself: it has a rat problem, an asbestos problem, and a chronic shortage of space for the nearly 1,500 MPs and peers (and their staff). What would be lost, I wanted to ask her, if parliament decamped from Westminster?

Baroness Boothroyd is the best-qualified person in Britain to answer this question: she has worked in parliament since 1956, starting as a secretary, before returning as an MP and then a peer. “I was always thrilled to walk across Westminster Hall,” she told me. “The sheer thrill of walking across that great hall to go to work.” She talked about standing reverently in front of the great Armada Portrait of her heroine, Elizabeth I. “I never cease to be thrilled about it . . . What a privileged life I’ve had. I want to preserve that for other people and other generations.”

Much as it pains me, this is where the formidable Betty and I must part ways. Because, when it comes to the Palace of Westminster, the laudable urge to preserve our history has clotted into an unhealthy attachment to the outdated and antiquated. Any attempt to drag parliament into the 20th century, let alone the 21st, is treated by a certain cadre of MPs as a heresy akin to taking a leak on the Bayeux Tapestry.

The most obvious example of this came in 2011, when Speaker John Bercow ruled that the building could probably cope if one of the subsidised bars was turned into a crèche. The bar in question – Bellamy’s – only became part of the parliamentary estate in the 1990s but that didn’t stop a mass outbreak of pearl-clutching and anonymous briefings about the terrible expense. Never mind that it’s not very modern or inclusive to ask parents to work late into the night without any childcare facilities – if it’s the money that worries people, perhaps we could start by decommissioning the 25-yard shooting range in the House of Lords basement?

Woven into the very fabric of Westminster are assumptions about who the building – and, by extension, our democracy – is intended to serve. The sashes to hang your sword in the cloakroom may be a quaint relic of an age long gone, but the lack of convenient disabled access and the shortage of ladies’ loos in the old palace are daily reminders that parliament wasn’t built with those groups in mind.

The BBC’s recent eye-opening documentary Inside the Commons triggered another thought. I watched Jacob Rees-Mogg take to the pettifogging regulations like an impeccably suited duck to water, while other backbenchers who had been, say, bricklayers or heads of charities cheerfully admitted that they found the whole thing completely barmy. And I realised: all the by-laws, the prayer cards to mark your seat, the juvenile heckling in the chamber . . . that comforts a certain type of person, because it reminds them of public school, the Oxford Union, the Travellers Club. They’ve already survived a decade of spotted dick in the canteen and people in silly outfits talking Latin.

I find all this deeply unnerving, because I love history. Love history. Some Commons traditions are definitely worth preserving: every time on Queen’s Speech day that Black Rod is turned away from the House, it reminds us that we have a democracy only because our ancestors fought to disobey the monarch. So I feel a twinge every time someone suggests that we should kick MPs out and make them set up shop somewhere else. The Scottish Parliament building is beautiful – that ceiling, that location – as is its Welsh equivalent, but wouldn’t something be lost by clearing out the green benches and replacing them with a semi-circle of Ikea’s best blond wood?

Looked at dispassionately, the arguments for relocating parliament are persuasive. Andrew Adonis has made the case that moving the institution to a northern city would break London’s stranglehold on power. The former Policy Exchange director Neil O’Brien, now an adviser to George Osborne, agrees. He pointed out in 2012 that: “London is effectively New York, LA and Washington all rolled into one – the capital of finance, culture and politics.” Now, the campaign group Generation Rent has semi-flippantly suggested that the palace could be turned into 364 affordable flats for hard-up Londoners, and selling Portcullis House would generate £500m. Parliament could be shipped off to somewhere like Hull. 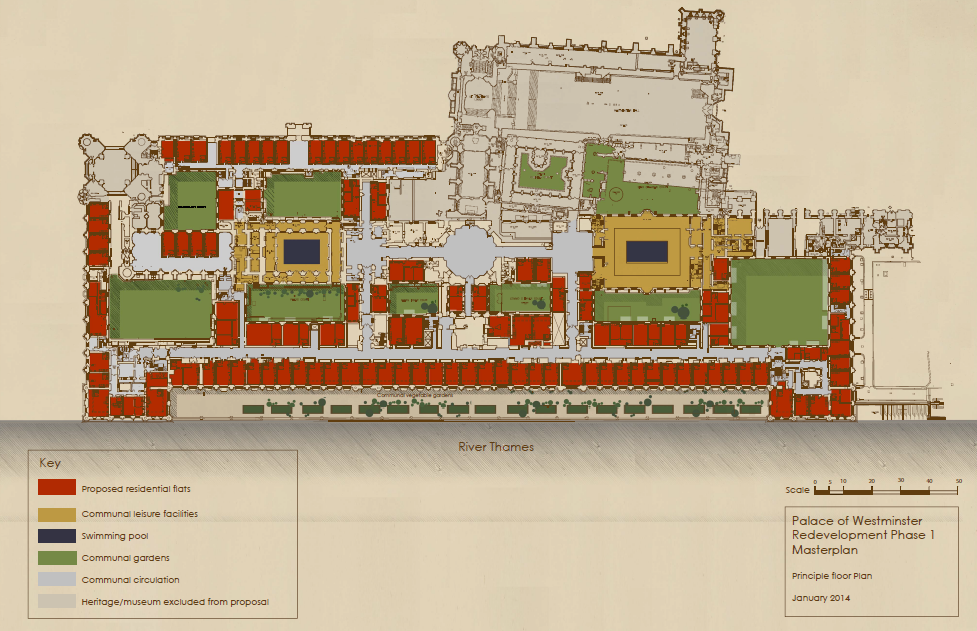 It won’t happen, of course. There will be enough trouble trying to persuade MPs to move out temporarily while £3bn of essential repair is done to the building: most would prefer that the work be done around them, even though this will cost more. There is also much sniffing about a new education centre turning parliament into a “tourist attraction”, as if many of those tourists aren’t the voters they are elected to represent. The irony is that, if the Commons does crumble into the Thames, it will be largely because the ultra-traditionalists resisted any kind of modernisation for so long.

At the debate in November where Betty Boothroyd raised Unesco’s concerns, the Conservative peer Michael Dobbs recalled that the only reason parliament was rebuilt was that it burned down in 1834. “I am told that when the roof of the House of Commons fell in as a result of the fire, the crowd looking on burst into spontaneous applause,” Dobbs said. “We politicians should know our place.”

Now read the proposal to turn parliament into flats at CityMetric.