Ingestre Court, a towerblock of crumbling concrete reaching out from the heart of London’s Soho, has some new residents. Squatters, from a campaign group called Love Activists London, moved in five weeks ago.

This is the seventeenth large prominent building in the capital the group has occupied since December last year. The squatters have already been turfed out of such big vacant spaces as the former RBS offices, the ex-Nikelodeon TV HQ, and the former Institute of Directors building on Pall Mall (labelled “London’s poshest squat”). They expect the bailiffs any day now. 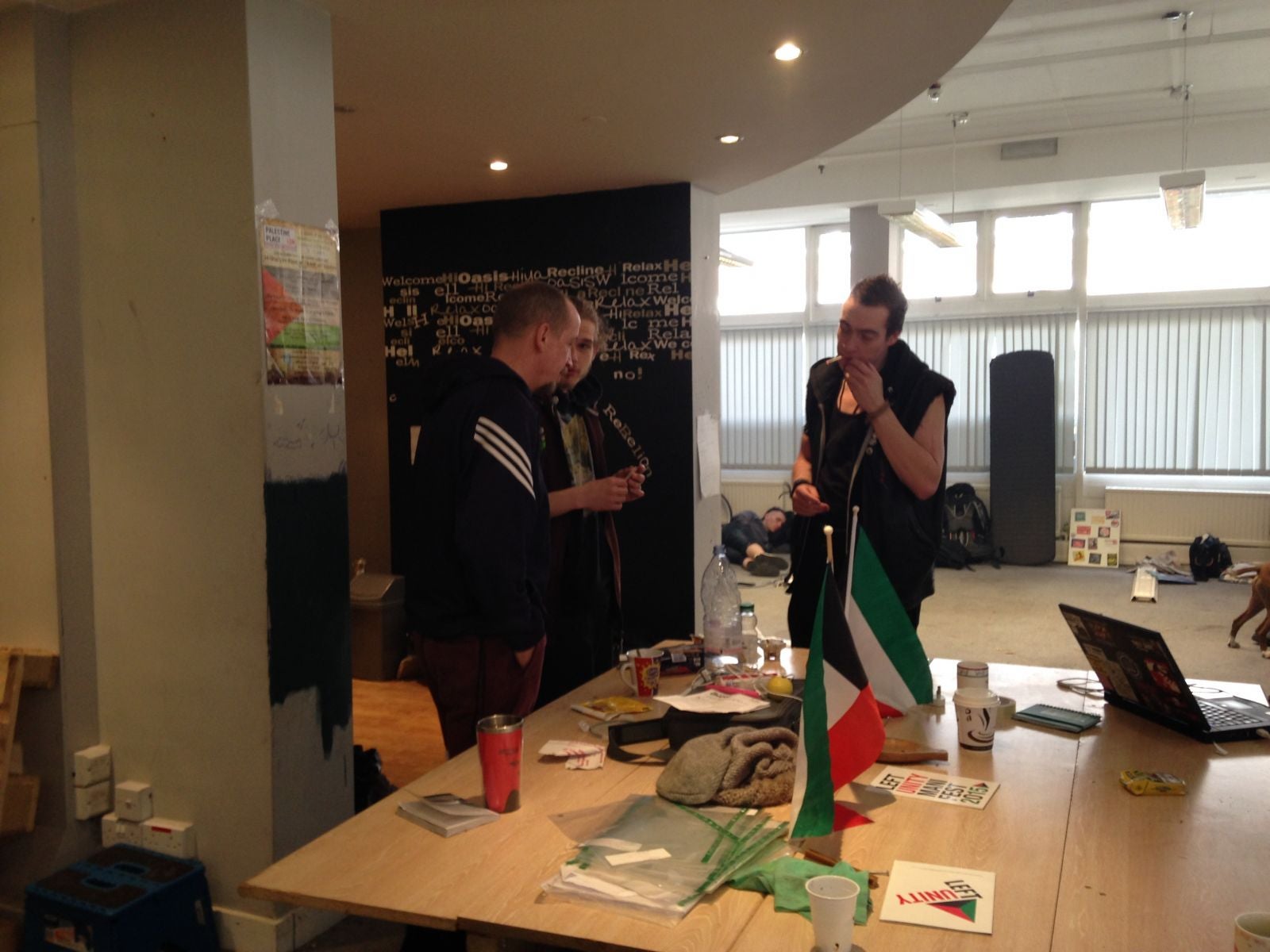 Rav, a 23-year-old clean-shaven and softly-spoken man in a grey jumper, is making an enormous pot of porridge on a portable stove in the squat’s makeshift kitchen. “In central London, you’re usually given two weeks. We’ve been here five,” he smiles. “So I’m prepared to be packing pretty quick.”

Why does he think the 40 or 50 squatters here have a right to live in these places? “There are so many empty buildings in London. And we’re using it to do positive things. To house homeless people, to feed them, and for events and political discussions like this one.” 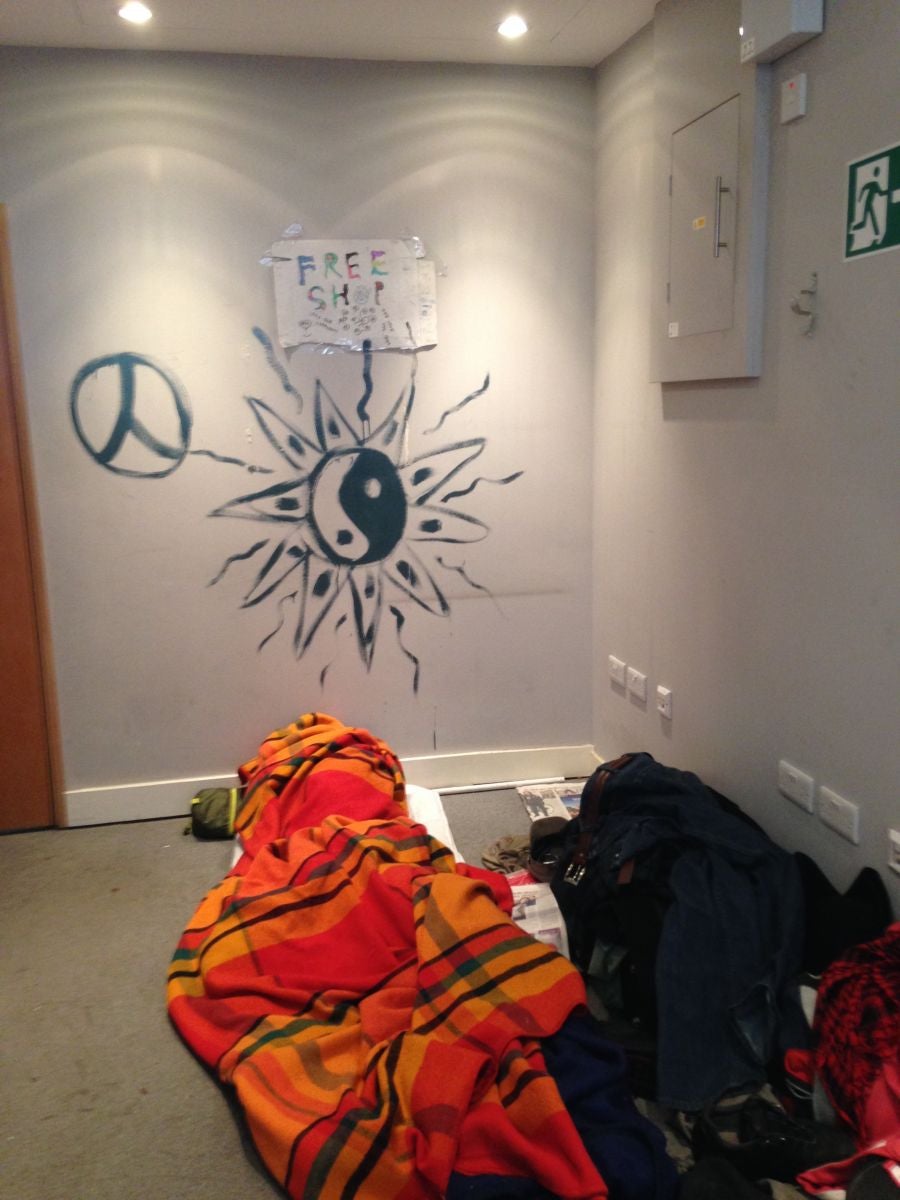 A hazel brown boxer dog wanders placidly around the ground floor space, which is festooned with sleeping bags, Palestinian flags, socialist stickers and graffiti slogans (“One Solution!”). A man sleeps soundly beside a fire extinguisher against the wall, in spite of the enormous black speaker placed directly in front of him, pulsating beats through the building.

But it’s not just morning naps here today. The squatters are hosting the manifesto launch of a new leftwing party, Left Unity. It is running ten candidates in the general election, in a variety of places, from Vauxhall to Bristol West, and Edinburgh to Ellesmere Port. In the press conference are a smattering of reporters, a handful of curious squatters, and a shopping trolley containing mystery fabrics in the corner.

Ken Loach, the famed socialist film director and one of the high-profile founders of Left Unity, is launching the manifesto. For a leftwing firebrand, he is certainly mild-mannered.

Posing tentatively for photos in front of a wall of Left Unity campaign posters (“Don’t blame immigration: blame the bankers”; “No more evictions: housing is a right”) in a casual blue suit and brown brogues, he says: “I’m only a rank and file member; please don’t present me as the leader”. 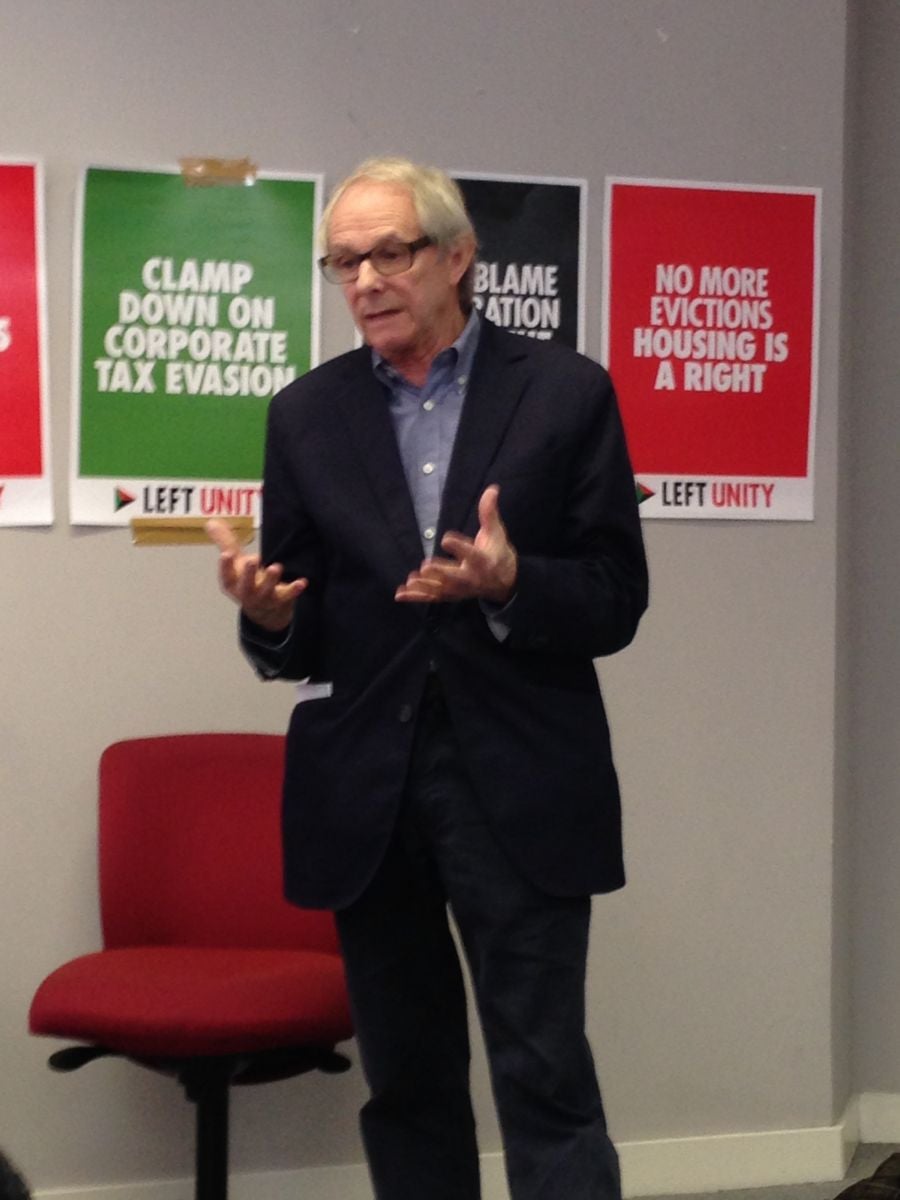 The National Secretary (and CND leader), Kate Hudson, explains her choice of venue: “A key part of our manifesto is the terrible crisis of homelessness in Britain today… and we support the legalisation of squatting in empty buildings.” Applause ensues. Ellesmere Port and Neston candidate, Felicity Dowling, who does a speech about housing, adds: “This will be a manifesto launch with a difference. Instead of using a glitzy venue like the main parties, we want to highlight the growing crisis of homelessness.”

Loach gives a fluent speech about Left Unity’s anti-market aims – all the other parties “base themselves on the idea of the market”. The manifesto provides an alternative to all the narratives we hear from mainstream parties. It is pro-immigration, anti-markets, calls for full employment, and advocates power of the individual over banks and multinationals. Yet the most notable passages of Loach’s speech include his disappointment in Labour, and his comments about the trade union movement.

He questions how Labour can call itself a “leftwing party” and sees “no sign the Labour party will end the privatisation and subcontracting in the health service” – kicking Ed Miliband where it hurts; the NHS. “The left is not a crowded place I’m afraid,” he says, sadly. “The left is quite sparse.”

Loach condemns the mainstream parties in the election campaign as “bald men arguing over the comb… a fine point discussion between people who have no real answers”. He believes they “underestimate that there’s a huge anger amongst people”. 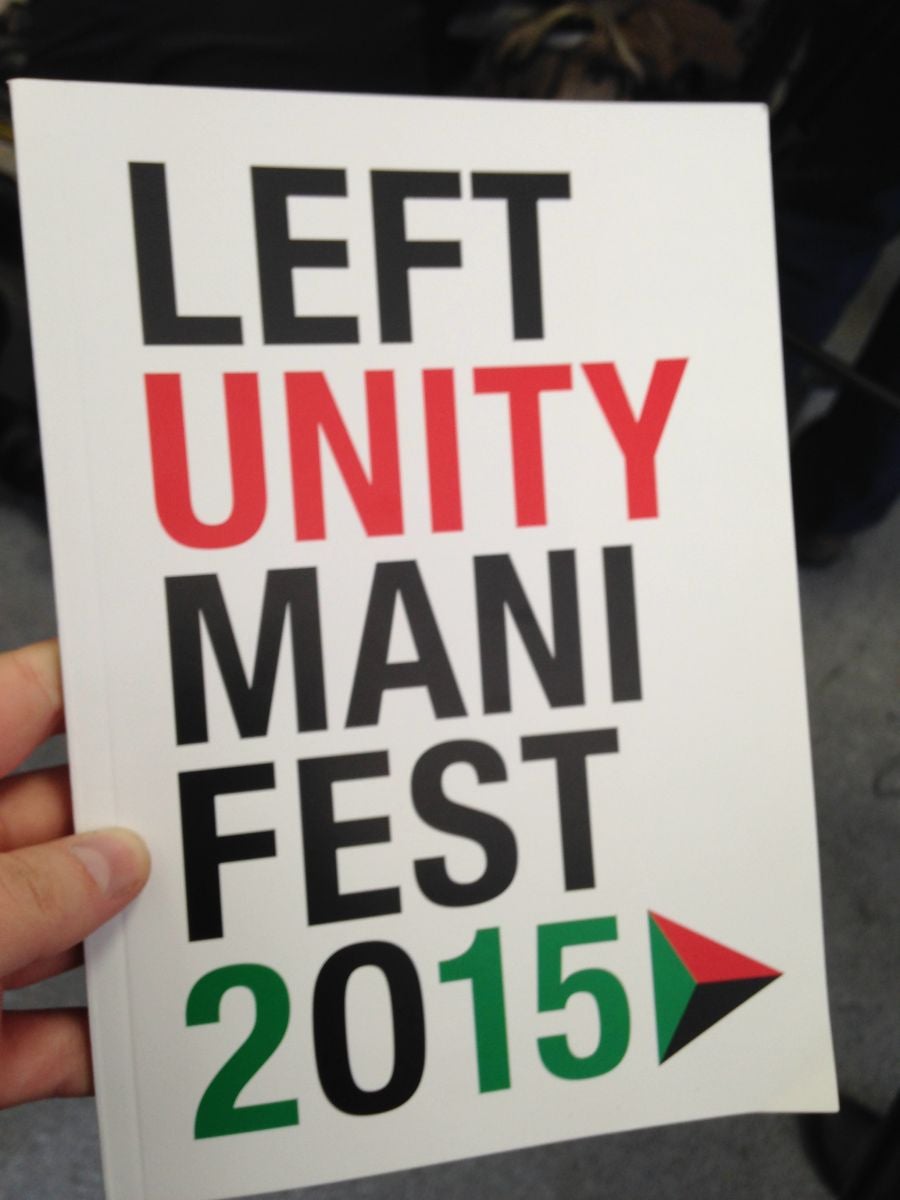 When I ask about the role of trade unions, Loach is forthright but critical. He starts by telling the room: “Everyone should be in a trade union; that is our strength.”

But after taking a straw poll of who present is a trade union member, and calling it an “absolute disgrace” that one freelance cameraman isn’t signed up, Loach calls on our unions to take more action, because at the moment the TUC is “just an empty phrase”. He also calls Labour’s “depth of ignorance” about the trade union movement “shocking”. 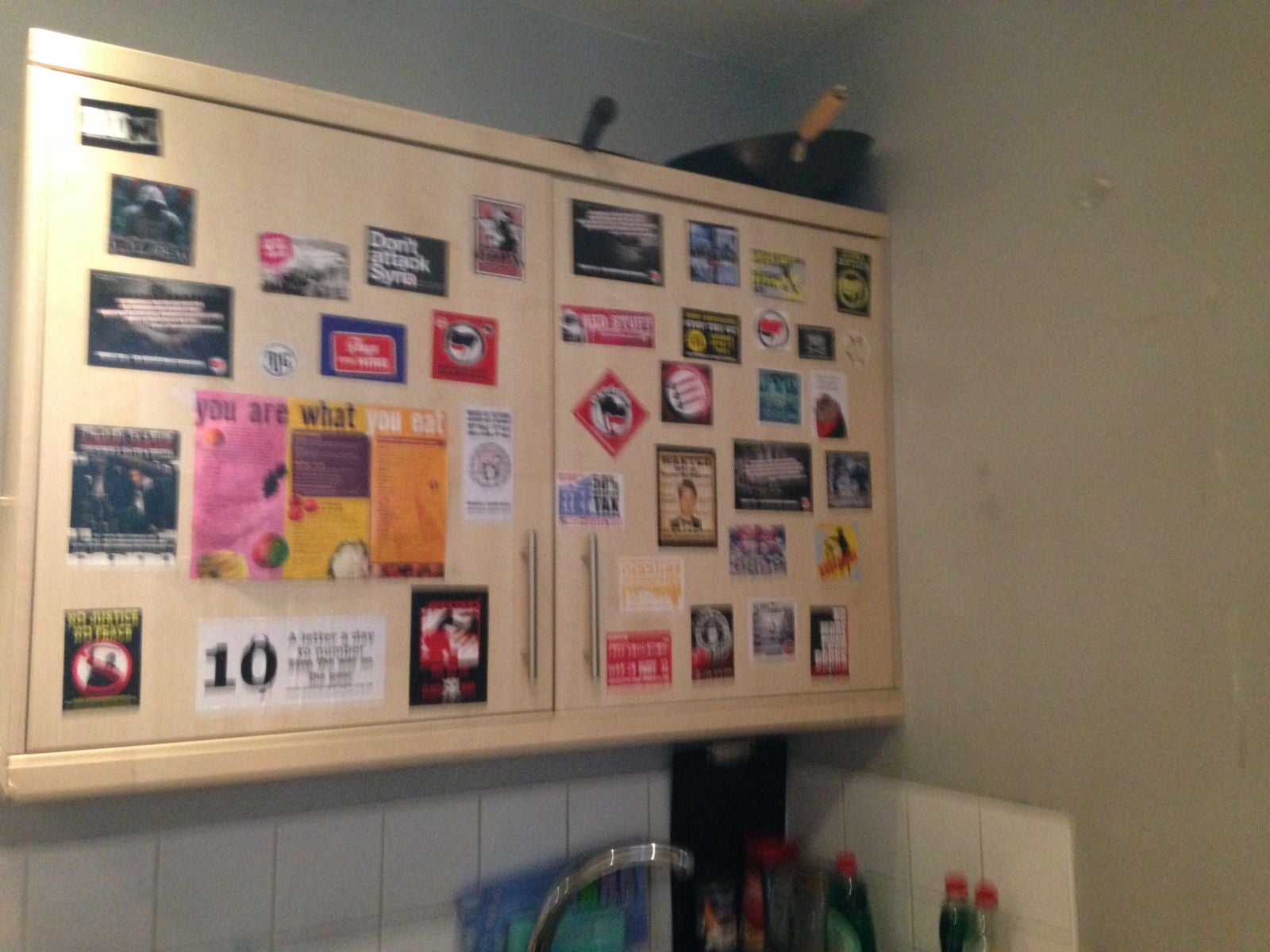 Although it’s unsurprising that those with socialist values feel betrayed by Labour, it’s a symptom of the shattered left that the trade union movement is also no longer untouchable.

Norbert, a 59-year-old squatter sipping coffee out of a Cadbury Creme Egg mug, and a rare older member of Love Activists, tells me he used to be a Labour member, but left on Tony Blair’s arrival – “so there’s no blood on my hands”.

He has been squatting since the Seventies, always in London, “because of the housing crisis”. “Rather than just sit in an armchair, being an armchair activist, I’m a foot soldier,” he says.

“I’m the oldest one, it’s mostly young people, and I see them as victims of the banking crisis, and the failure of our established politicians to do anything about it.

“I’m not a supporter of Left Unity, but it’s a progressive political party and I’m happy for it to use this space to launch its manifesto.

“Mainstream politicians should stop bailing out the banks, and use those resources to put into housing. Council housing under control of those representatives elected by the people. We’ve had enough of Thatcher’s legacy.” 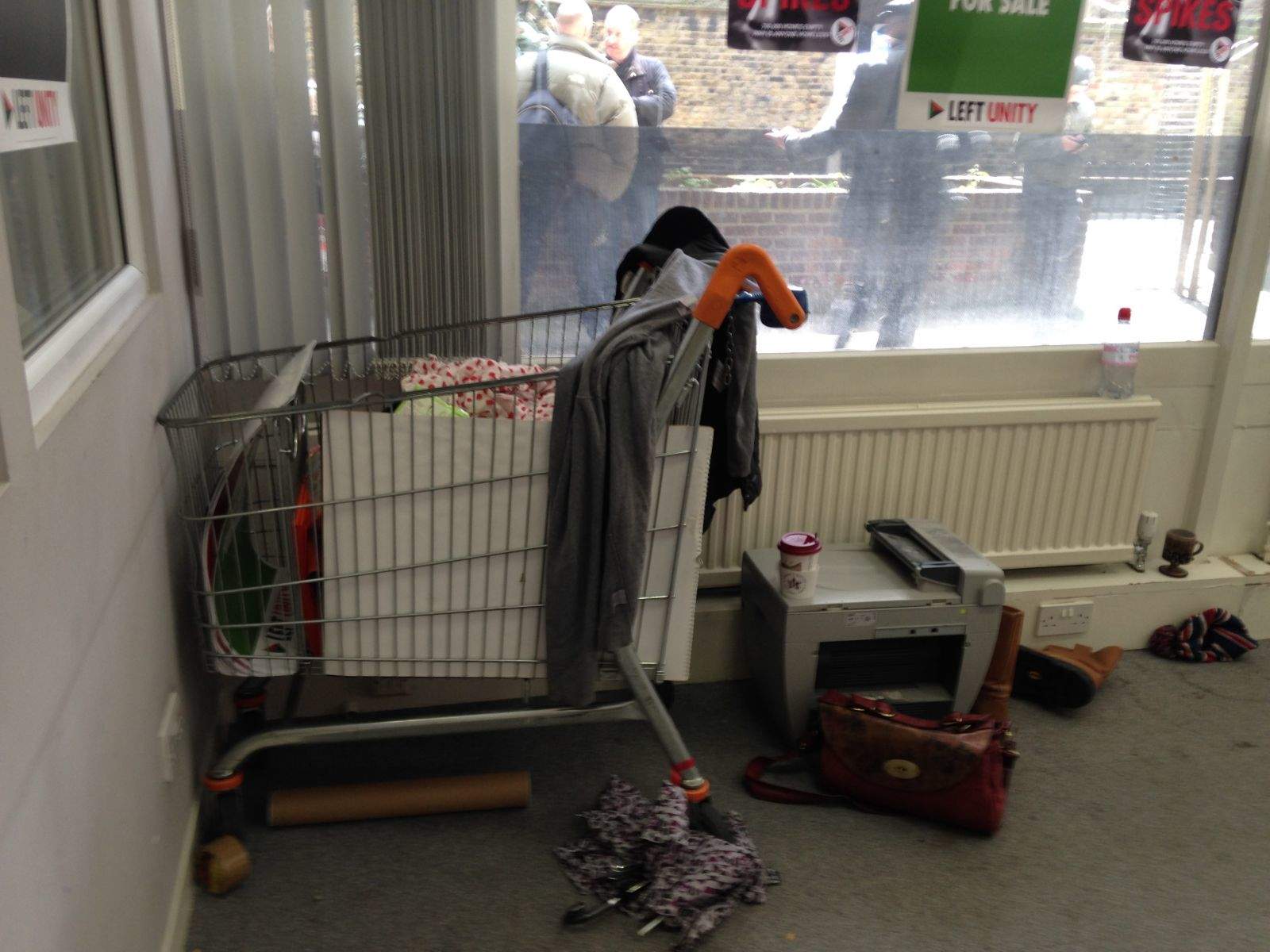