Bez is jetlagged. He’s just returned from creating music with an indigenous tribe in Panama, followed by a whistlestop tour of Mexico and a gig in the city. To help them “live the lifestyle they live”, all of the money raised from the music made in South America will be donated to the tribe. “A well-deserved two week break from politics,” he laughs.

Bez answers the phone in his thick Salford accent: “How do mate?” he says. Mark Berry (Bez’s real name) shot to fame in the Eighties with his distinctive dance moves while on stage with the Happy Mondays. Then, of course, he went on to beat Blazin’ Squad rapper, Kenzie, to the crown in Celebrity Big Brother 2005 – despite Kenzie being the favourite to win.

But now this maraca-shaking “proud Salfordian” has decided to use his celebrity status to face a different contest altogether: politics. And he – like Russell Brand – is calling for some version of a revolution. Bez decided to stand under the banner of his own creation: the Reality Party. And he’s running in the Salford & Eccles constituency where the incumbent Labour MP, Hazel Blears, is preparing to step down. An MP who’s “been caught with her fingers in the till,” adds Bez. (Blears was stung during the expenses scandal, though she did not break the law).

Bez proudly announced his campaign – and the revolution – on the morning the Labour politician Tony Benn died. “The radio was playing speeches from Benn all day,” he recalls. “It actually made the hairs on my neck stand up.” The late Benn is the only politician Bez has any time for. The rest, he says, “are all the same”. “The same monotone voice, the same language – there’s no passion coming from anyone anymore!”

Unfortunately, Bez’s initial revolution was shortlived after teething problems with the party in January: namely, forgetting to register with the Electoral Commission. The regulators claim they wrote to Bez on a number occasions warning him that the Reality Party sounded too much like the pre-existing Realists’ Party and could confuse the electorate. Bez failed to respond and the party was officially deregistered.

On 12 Feburary, the indie band star renamed his party We Are The Reality Party, or WATRP – an acronym that I’m not sure how to pronounce. Anyway: Vive la revolution, take two! 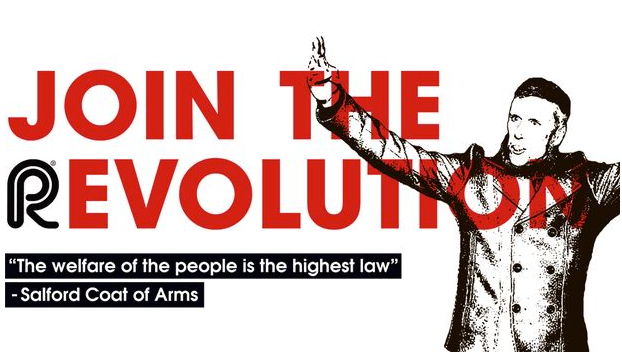 We Are The Reality Party election poster

The subject he is most passionate about is fracking. Not long ago, Bez and his girlfriend, Firouzeh Razavi, protested against the government’s fracking plans by staging a week-long “bed-in” at a London hotel. Some pointed to parallels between the famous John Lennon bed protest in 1969 against the Vietnam war.

So, why not join the Green Party? I ask him. “I could have joined the Greens but I didn’t want to be restricted by party politics. I wanted to have a free hand to say what I wanted and do what I wanted really. The thing is with the Green party in Salford: they haven’t got a chance. They’re a middle-class greeny party that does not appeal to the people that I’m trying to appeal too.”

His other qualms are focused firmly on the Transatlantic Trade and Investment Partnership (TTIP) – “basically, that’s the American corporations and banks taking over fiscal sovereignty of this country” – the political disengagement he claims is so endemic in Salford and the “corporates”, who are “in the midst of a hostile takeover this country.”

What about Ukip? Bez goes off on one: “they are engineered by the Conservatives to bring this right wing agenda – this fascist agenda! Where you blame the immigrants. It’s what Hitler was doing before World War Two. And what’s happening now before World War Three.”

To put it lightly, Bez is an eccentric individual. And although some of his revolutionary concepts might need some fine-tuning, the attention he has paid to voter engagement in the constituency should be replicated across the country. “98 per cent of the people I asked on Salford precinct said they didn’t vote,” says Bez. “We’ve got to try and reengage all these people who are disenfranchised from politics because they don’t think they can make a difference.”

“Wake Up Salford” will be the name of his engagement campaign. Bez plans on setting up camp on estates in Salford and Eccles – in some of the most deprived areas – in the hope he can open up a dialogue​ with some of the city’s residents about his anti-fracking revolution. “We’re going to take a solar powered generator with us, set up a gazebo-type affair and we’re going to have people playing music and talking,” he adds.

Bez is well aware of the challenge that lies ahead: he’s in competition with Labour’s 40 per cent take of the seat in 2010. “But it’s not about the winning,” he says. “It’s about how well you fight. And I’m willing to put up the best fight I can.”

I ask him what message he’d give to voters in his constituency: “You not voting, you staying at home is just endorsing the system that you are unhappy with. The poor are getting stuffed. We’re going to have a situation like in Mexico – where I’ve just come back from – how the poor are living over there. And that’s going to be happening on the streets here in Manchester. It’s an unacceptable situation for a country that’s supposed to be civilized and set up the Empire.”