Labour has been “hijacked” by a north London liberal elite and the public thinks Ed Miliband is more of a “toff” than David Cameron, according to one prominent Labour backbencher.

In an interview with the New Statesman, Simon Danczuk, the Rochdale Labour MP, said, “any Labour politician that says to you they knock on a door and Ed Miliband is popular are telling lies. They’re just telling lies. It’s just not true. I spend four hours knocking on doors on a Sunday – they [constituents] say things like ‘you’re doing an alright job as MP but I don’t want Ed Miliband as Prime Minister, so I won’t vote for you.’ So it’ll cost me votes.

“You get it on the doorstep. If we’re having a straight conversation about this, he [Miliband] has an image of being more of a toff than David Cameron. That’s how the public see it. And what they mean by that is that he’s seen as more aloof. They’d prefer to go for a pint with David Cameron than they would with Ed Miliband, that’s the reality of it.”

Danczuk tells me that when the party chose Miliband as its new leader in September 2010, they weren’t aware that there was going to be “an upsurge in anti-politics and this desire for an alternative, authentic leadership.” He adds that the public are fed up with career politicians. So, hypothetically, I ask him, would the party have picked a different leader if they had this knowledge in 2010. “Oh yeah,” says Danczuk. “I undoubtedly think that. Definitely.”

Danczuk believes that Labour has a real problem if they don’t “realign” themselves after the general election. “If they [Labour] don’t start thinking afresh about how the approach politics and how they involve people at a community level… then I think we’ve got a real problem. I think we’ll continue to face decline.

“You know, this north London elite view of the world, just doesn’t play in Rochdale, Rotherham, Runcorn or anywhere else beginning with an “r” outside the M25.

This scathing criticism – 45 days before the general election, and less than two weeks before the beginning of the short campaign – will be an embarrassing blow for the Labour party. Not to mention a complete denunciation of Miliband’s biography and media strategy. Hardly welcome news for a party that was polling around 40 per cent in 2013 and are now neck and neck with the Tories in the polls (see May2015 for the latest poll of polls).

But Danczuk does add that the party is “smart and strong enough” to realign itself. “I mean let’s see what the turn out from the general election is. The fact that we’re only on 33% in the opinion polls doesn’t suggest that swathes of country are behind does it? Never mind is it neck and neck – it’s just a third of the country that are even thinking about voting for us. That tells us something. We’re getting something wrong. We’ll have to start getting something right.”

On working class people in politics

On the wall in Danczuk’s office in Portcullis House among his children’s drawings is a map of his constituency: a seat he won by just 889 votes in 2010, narrowly defeating the Liberal Democrat candidate Paul Rowen.  Danczuk is all too aware of the struggle he has ahead if he is to hold his constituency in just over a months’ time. And this hard-talking northerner believes he is losing votes because of Labour’s leadership and a deliberate attempt by the party to avoid speaking on immigration. He tells me that internally the party has put out briefing notes, “telling us to avoid speaking about it.”

Danczuk is one of a declining number of politicians from disadvantaged backgrounds that has made his way into politics. Born near Burnley in the back room of a terraced house, he left school with no real qualifications. “The only qualification I got was a grade C in English Langauge. It was the teacher, Mrs Stevenson: she was a complete battleaxe actually. She was the only person who could discipline me into actually making a point and learning.”

He says that his mother wasn’t very good at budgeting, and “she liked a drink.” A proportion of the benefits money she received would go on having a night out, Danczuk says. “Could you blame her really? She carried quite a burden. She got pregnant when she was 15 and had to marry my Dad. And my Dad was not a very nice person – quite a violent person – so she quite rightly left him. So, she carried the burden of having two very young children and she found it quite difficult.”

It was his mother who used to take Danczuk to visit his grandma, Agnes, in Burnley. She was always speaking about politics and was clearly a Labour supporter, adds Danczuk.  “And I just listened and observed this as a child.” It was his grandma that provided him with literature such as George Orwell’s Animal Farm, and the Road to Wigan Pier. It was these conversations and books, he tells me, that encouraged his interest in politics.

I ask his thoughts on the recent Sutton Trust research that found a third of new parliamentary candidates with a reasonable chance of winning their seat in the general election were privately educated.  The report added that the new candidates were unlikely to reflect any more social diversity than the current crop of MPs. “I don’t think it’s healthy, it’s not good for democracy,” says Danczuk. “It’s the wrong way for politics to be. We need a better balance. For all Tony Blair’s failures – and he had many – what he smart enough to do was create a team around him that was diverse.

“I do think the party has almost been hijacked by what I’ve described previously as a north London liberal elite. It’s just so disconnected. So it’s not even just about whether we have MPs from a working background, it’s the whole party and travel of direction for the party. We don’t speak on immigration because we’re afraid of upsetting certain sections of the London Labour party. You know, what about Rochdale where we have 600-800 asylum seekers? Where immigration is a massive problem.”

Danczuk adds that the party should listen to Maurice Glasman – the architect of Blue Labour – more. “I think that would help. If the party was more connected to the communities that we want to represent I think we’d do so much better from it. That’s why we should have people coming forward and getting into frontline politics.”

“You’ve got to communicate in way that engages people,” says Danczuk. “So you can’t, as leader, just do set piece speeches for three years – hidden behind a lectern – and hope that gets on the 10 o’clock news and convinces loads of people to vote Labour.”

Danczuk is all too aware of the tabloids’ “nasty side” and their tendency to “stick the knife in”: his wife, Karen Danczuk, in an interview with the Sun described how a family friend raped her between the ages of six and 11. The paper’s headline: “Exclusive – selfie queen’s hell” (a reference to Karen’s selfies on Twitter). But this, Danczuk says,  shouldn’t stop the party from using the tabloid press to get their messages across.

“Their [the Sun’s] piece today is actually a smartly written piece on the Independent Police Complaints Commission’s [IPCC] investigation into historic child sexual abuse, written in a language that will reach a million readers… Now, if we as a political party think we’re above and beyond using that organ getting across to the electorate, then we’re on to a loser aren’t we? 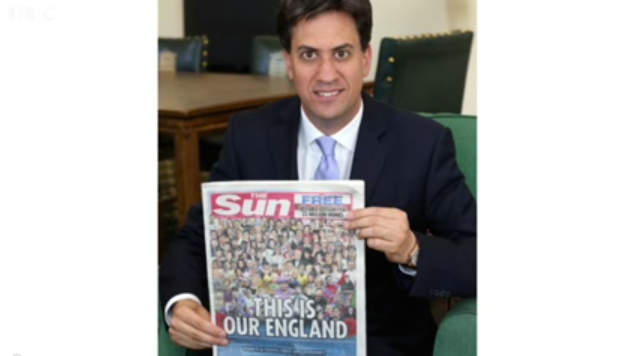 Ed Miliband, with the Sun in 2014   Photo: Youtube screengrab

“People read the Metro news on the way to work and they read the Sun newspaper. We as a political party have practically avoided getting coverage. And it’s a really important issue. Why would you do that? At the annual conference, in his speech, the leader [Miliband] slagged off the Daily Mail and the Sun newspaper – 12 months before a general election. The two most read newspapers in Britain. Just tell me why you would do that if you wanted to get your message across?”

I ask Danczuk what he thought of Miliband apologising in June 2014 for agreeing to be pictured holding a World Cup issue of the Sun. It was a picture that infuriated people in Liverpool, where the newspaper has experienced a boycott ever since it’s ill judged and controversial coverage of the Hillsborough disaster in 1989.

“Harriet Harman came out and said he [Miliband] was right to pose with the Sun newspaper and he was right to apologise for posing with the Sun newspaper,” says Danczuk. “And it’s that sort of double speak from politicians: how could he be right on both counts? That turns people off politics. So when somebody hears a politician say that, you know what they think, if you pardon the language: ‘what a fucking knob’. That’s the reality of it.”