Grant Shapps, the swarthy blue-eyed estate agent masquerading as Tory party chairman, is in trouble. Michael Green, the fake name for his businessman alter ego, has come back to haunt him, like a devil on his polyester-clad shoulder.

It turns out he “screwed up” during a radio interview when he claimed that he had never had a second job while being an MP.

But his alias isn’t the only weird thing about him.

Pretending to be Michael Green

Shapps’s pseudonym for his work as a web marketeer (which also sounds like it’s made up) came out a while back, leading to the harrowing Kafkaesque scene of Channel 4’s Michael Crick chasing him around a sweaty series of corridors backstage at conference trying to work out who and why the mystery Michael Green is. And the identities of those mystery people who wrote testimonials for his book.

Surfing on a dollar bill

Well, not exactly, but some of his books under the Green pen name have enjoyable front covers, made all the more fun by the fact that Shapps is basically a stock image of a man in a tie.

[See also: Can Rishi Sunak regain his past popularity?]

Having punk in his blood

There’s never even a sly hint of rebellion in his eyes when Shapps smiles wetly to the camera on the Daily Politics chanting “long-term economic plan”, so it is a little strange that punk runs in his blood. Mick Jones, the Clash’s former guitarist, is his cousin.

In contrast, Shapps describes his values as “work hard, play by the rules”.


Flying is his hobby

Ordinary hardworking millionaire businessman who just wants to get on in life Grant Shapps’s hobby is flying his £100,000 plane.

In fact, he once tried to block a plan to build 700 homes on the airfield where he keeps his plane. Pretty rich for a man who claims he prefers Nando’s to The Ivy.

[See also: The race to be Britain’s next Prime Minister has never been so wide open]

One of Shapps’s biggest gaffes in office was his poster boasting about the Tories’ bingo tax cut. The smug tone of self-congratulatory snobbery and a fundamental othering of working-class voters didn’t go down so well.

Shapps has a suspicious number of followers on Twitter (84k) and has a habit of following and unfollowing hundreds of people repeatedly on the site. This has led to him to being accused of using a bot to up his numbers.

To great hilarity and derision, Shapps first tried his hand at a listicle about energy bills. It included gratuitous capital letters, multiple pictures of Ed Miliband and a stoically melting cat. 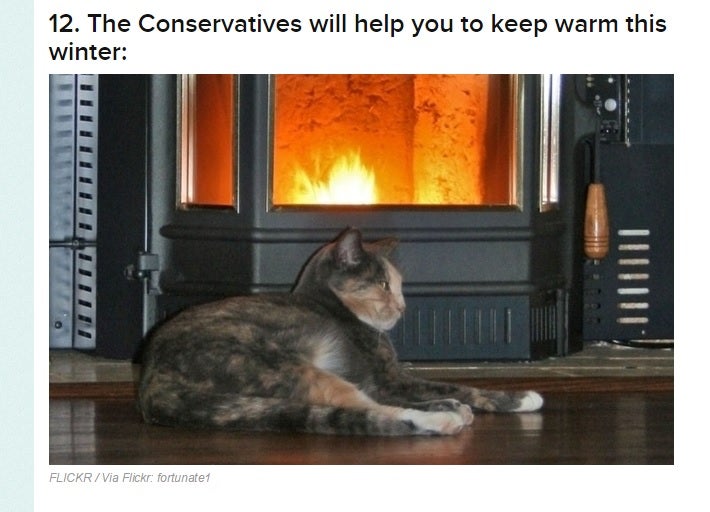 Photo: “12 Facts: Why Energy Bills Are Sky High, And What We Can Do About It” screengrab

This piece wasn’t positively received. So he carried on contributing articles to the site. One of them was about English Votes for English Laws, but simply betrayed a failure to grasp what speech bubbles are for.

Photo: “Ed Miliband Is In A ‘Real Pickle’ Over English Votes For English Laws. That’s According To His Own MPs” screengrab

The Observer discovered that Shapps had tweaked his Wikipedia entry to remove the information about his performance at school. Apparently it said that he “obtained four O-levels including an A in CDT”, whereas he actually obtained five – though CCHQ won’t disclose the grades he got. Though his aptitude at Craft, Design and Technology is clearly genuine. How else could he have designed the front cover of that ebook?

[See also: Will Liz Truss be our next prime minister?]

Usually this mole would ignore a politician’s “penchant for karaoke” because it’s a classic Westminster village “hinterland” trope (if ripping off other people’s ideas via your own embarrassingly incompetent performances counts as a hinterland in politics), but we have been reminded of another of Grant Shapps’ unusual hobbies…he like rapping:

He says he had a karaoke night just the other evening in this very pub. What’s his speciality? “Rapper’s Delight.” Well let’s hear it then? He looks at his minder, uncertainly. “Well this is not for broadcast,” he says. And he’s off, fast and furious. There’s no stopping him. “I said a hip-hop/ Hippie to the hippie/ The hip hip a hop, and you don’t stop, a rock it … Now what you hear is not a test – I’m rappin’ to the beat … ” Do many other ministers rap? “I haven’t compared notes, actually. In fairness, the version I do is the short version; it’s only 10 minutes.”

Topics in this article: Grant Shapps