As the pound strengthens against the euro, the latest data from the ONS show that there has been a rise in migrant workers to the UK from other EU countries. But while the focus has been on the numbers of migrants working in the UK, a more interesting development is clear from a different set of data – the government’s figures on citizenship.

The last fifteen years have seen a surge in the number of people becoming British citizens – the total number of citizenship grants has more than doubled since the early 2000s. At first glance, this isn’t surprising. There’s been a lot more migration to the UK in recent decades, and there are plenty of benefits to becoming a citizen, from having unrestricted entry into the UK to not having to worry about visas when looking for work.

But in the data there’s something that is surprising: the number of EU migrants becoming citizens has also increased, particularly migrants from the ‘A8’ countries in Central and Eastern European that joined the EU in 2004. The numbers are still small – only around 18,000 in 2013 – but there’s a clear positive trend. For A8 migrants, the rise kicked in from around 2009 onwards. This makes sense: you usually need to reside in Britain for five years before applying for citizenship, and accession took place in 2004. 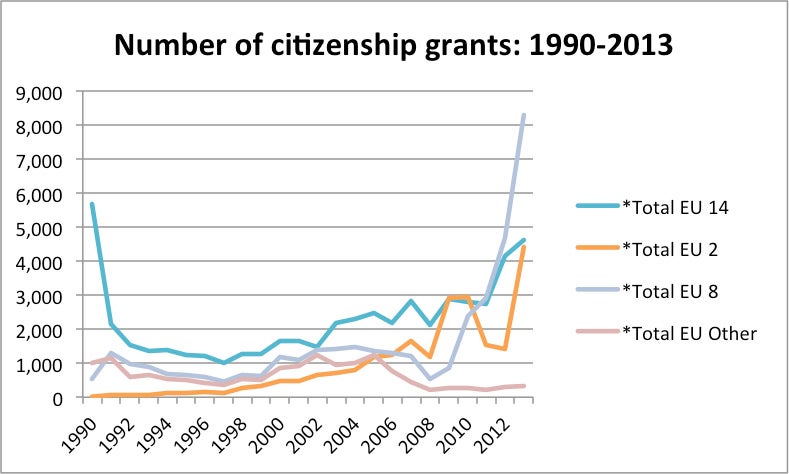 The odd thing about this is that EU migrants are legally entitled to many of the rights of British citizens. It’s true that there are a few things EU migrants can’t do without becoming British citizens – like vote in general elections. And there are also additional rules around benefits, some of which have come into play recently – for instance, EU jobseekers have to wait three months and then face a residency test if they want to get income-based jobseeker’s allowance. But EU migrants are generally entitled to the same benefits as British citizens – and after five years of staying in the UK EU migrants have the right to permanent residence. What with all the extra costs and hassle involved in applying for citizenship (the standard naturalisation fee is currently £906), it’s not clear why EU migrants would bother.

There is one stand-out reason. Given all the news about a future referendum on the UK’s membership of the EU, the potential renegotiation of freedom of movement rules, and a clampdown on benefits, some migrants from A8 countries might feel that their position is a little more precarious than the current law suggests.

IPPR found some examples of this reasoning while carrying out the research for our recent report ‘Shared Ground’. Emilija, a young parent in Normanton, talked to us about her reasons for wanting to become a UK citizen: ‘I’ve read in the paper they are going to kick us out, so I would do it [gain British citizenship] for security. It won’t change a lot, but I would feel more comfortable.’

This explanation for the surge raises an important question: what’s the point of citizenship? For the French revolutionaries, becoming a citizen was about no longer being a subject: it was a fundamental reconfiguration of the relationship between the individual and the state. Britain has a very different history (on some accounts, we are technically still subjects rather than citizens). But citizenship still contains a moral dimension: it’s about rootedness, commitment, and stability. Being a citizen is about more than accruing a set of entitlements; it’s about establishing a bond with the UK and with your local neighbourhood. Citizenship encourages people to settle permanently and reduces the population churn that can at times undermine cohesion and put pressure on public services. And, according to IPPR research on public attitudes to migration, there is wide public support for permanent settlement as opposed to temporary residence and churn.

So even if the reasons for the boost in citizenship numbers from A8 countries are largely pragmatic, the act of acquiring citizenship is still an important way of strengthening the ties of new migrants to the UK. That’s why the government should focus on encouraging more people to become citizens and making sure that the process of becoming a citizen is a meaningful one. At IPPR we’ve advocated auto-enrolling migrants on a path to citizenship after five years to encourage people to become citizens. We’ve also outlined plans for a more localised, community-focused citizenship test, based on the realities of daily life in the UK.

These measures should apply just as much to EU migrants as to newcomers from outside the EU. Yes, their legal status is different, and they have less to gain from British citizenship. But national citizenship still matters, above and beyond the sum of its material benefits. The surge in citizenship is something to be embraced, for EU and non-EU migrants alike.

Marley Morris is a researcher at IPPR