Rather embarrassing news for Labour after a good run at keeping the tax shenanigans of the wealthy in the news. It turns out the largest donation the party received from a non-union donor in October-December last year was from PwC. The accountancy giant gave the party £386,605. This wasn’t a cash donation, but a donation of staff secondments who do analysis and research for the party in the absence of access to the civil service. As both Labour and PwC point out, the secondees are impartial.

This is pretty awkward for the party, not only because the firm is known for its tax expertise, but also due to recent accusations from the Public Accounts Committee. The committee chair and Labour MP Margaret Hodge told the BBC at the beginning of this month that Labour shadow cabinet ministers, such as Ed Balls, Chuka Umunna, and Rachel Reeves, receiving assistance from the firm is “inappropriate”.

She was speaking on the day that her committee produced a report accusing the firm of “the promotion of tax avoidance on an industrial scale”. PwC disagreed with this analysis but did comment that the UK tax system is “too complex”.

Here are the donation figures, published by the Electoral Commission:

Letter of the week: Reasons to stay put 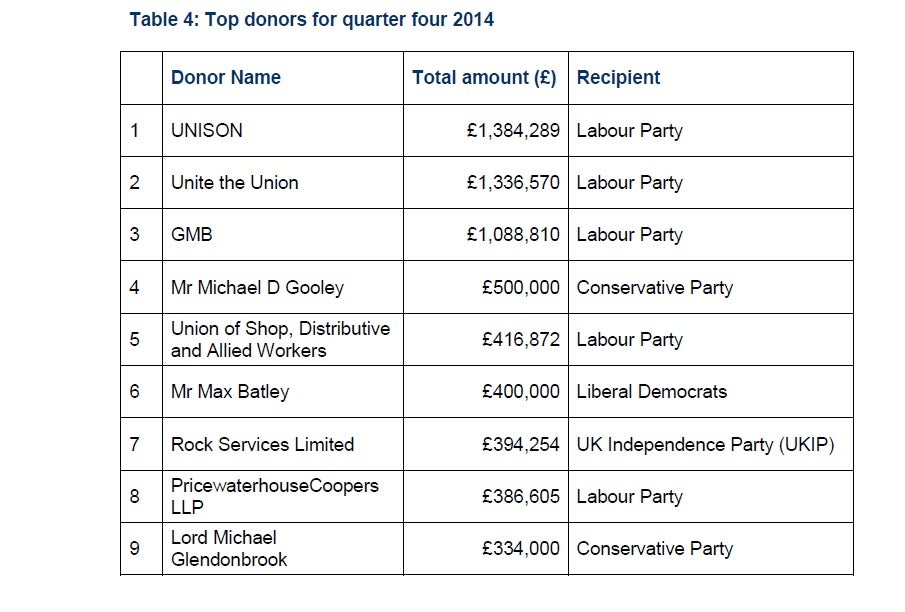 PwC have provided long standing staff support to all three major political parties on a non-party basis, as happened for the Conservatives and Lib Dems before the last election. Given the complexity of government decisions in areas such as tax policy – and that opposition parties do not have significant access to civil servants – the support provided by organisations such as these helps ensure that there is better scrutiny of government policy. Secondees do not influence opposition policy decisions. Where organisations provide staff to support research and analysis for opposition parties it is right that these are declared – as currently happens – in the Register of Members’ Interests

Nevertheless, if the tax avoidance row rumbles on, this donation will give the Conservative party a response to Labour’s accusations about Tory donors.

Doubly tricky for Labour is that it actually accepted a higher amount than the Tories did in the fourth quarter of 2014. Adding up public funds to donations excluding public funds, Labour accepted £10,888,480 to the Tories’ £8,365,141. This somewhat undermines Labour politicians’ claims that they will be outspent by the Conservatives this election.