One of the unforeseen consequences of coalition, combined with fixed-term Parliaments, is that we currently have a lame-duck government. Nothing is happening in terms of government policies – instead ministers are promising, on behalf of their own party not the government as a whole, to do things if they are elected to govern alone. The consequence has been the announcement or reannouncement of a series of gimmicks (for example, benefit sanctions for addicts refusing treatment) that the government had sensibly previously dismissed as impractical or counterproductive.

So civil servants aren’t doing any policy work. Instead, they are preparing for the really big event of the first few months of the next Parliament – the spending review.  As the Office of Budget Responsibility has pointed out, the government’s current “plans”, set out in the Autumn Statement, imply that total public spending, relative to GDP, would fall to its lowest level in 80 years.  The OBR also made it clear that these were simply assertions by the government as to what it would do – there are no actual spending plans as yet beyond 2015-16. For this reason, they should not be taken that seriously; indeed, the definitive survey of UK macroeconomists by the Centre for Macroeconomics found that only 1 in 10 thought the government’s plans were credible.

But there will be a spending review. And there will be, in the usual cliché, “tough choices” – even tougher than usual. As FlipChartRick’s venn diagram memorably puts it, anybody who thinks that you can balance the budget, not put up taxes and maintain public services at a reasonable standard is “living in LaLa land”.

Before the 2010 spending review, the Prime Minister said “we are all in this together”.  But of course, and inevitably, some individuals and groups lost out more or less than others. That doesn’t make the decisions taken then “unfair”; some were deliberate political choices, made by an elected government in the full knowledge of the consequences; some reflected the patterns of existing public spending and services.

However, any government has both a moral and a legal obligation to do its best to understand the consequences of its decisions – preferably in advance.  In particular, the 2010 Equality Act imposes a requirement on the government to take account of the impact of its decisions on equality of opportunity between different groups.   Since 2011, the Equality and Human Rights Commission has been looking at how that worked in practice in the Treasury and Whitehall in the 2010 Spending Review and since – and what lessons can be learned for the next Parliament.

The EHRC also commissioned NIESR, and my colleague Howard Reed at Landman Economics, to model the overall impact of tax and spending decisions.  There is more about the background here; and more about our findings here.

I would sum our findings as two-fold. First, the Treasury did its best (and better than it ever did before) with limited resources and inevitably imperfect data, to analyse the consequences of tax and spending decisions taken in this Parliament on different groups. Considerable progress has been made, and they deserve credit.  But, second, that with relatively limited extra effort and resources more could easily be done; and, perhaps more importantly, that if more analysis had been done decisions might well have been different.  One chart makes the point. It is difficult (although, admittedly, not impossible) to believe that a government genuinely committed to the principle of “we’re all in this together” would have deliberately chosen to implement a set of measures that bore far more heavily on low-income disabled families than any other single group. 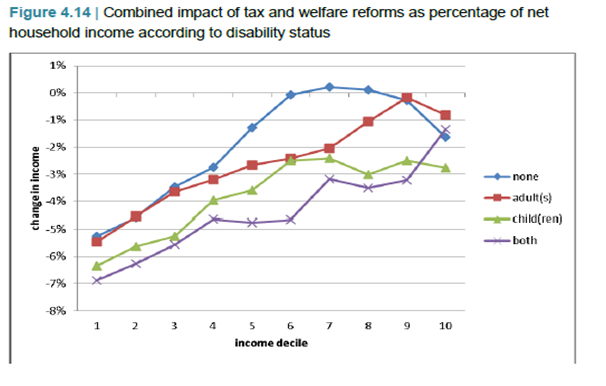 Today, however, the EHRC publishes its final report, and it looks forwards not backward.  It makes five key recommendations:

“The EHRC, not me, is responsible for the recommendations. But for what it is worth, both as a researcher and as a former senior civil servant in the Treasury, DWP and elsewhere, I think they are practical, reasonable, and implementable; and that they would deliver a meaningful improvement in the quality of analysis available to Ministers when they make those inevitable “hard choices”. “