It is sometimes said that young people only have themselves to blame. Yes, austerity has protected the old in the name of political expediency. But the young don’t vote. And if you don’t vote in a democracy, you can bet that vote-seeking politicians will ignore you.

There is something in this argument. Since 1987, the generation voting gap has more than doubled. In 1987, over-65s were only 9.4 per cent more likely to vote than under-25s. In 2010, that figure was 22.9 per cent, according to the British Election Study. Others put the difference even higher still.

But that young people do not vote is not just their fault. It’s also the fault of politicians, of all stripes, who have given the impression that they care not for the young. Twice in the past ten years, governing parties have broken their election promises to introduce tuition fees, as Labour did in 2004, and then abolish them, as the Liberal Democrats did when they trebled fees in coalition with the Conservatives in 2010. 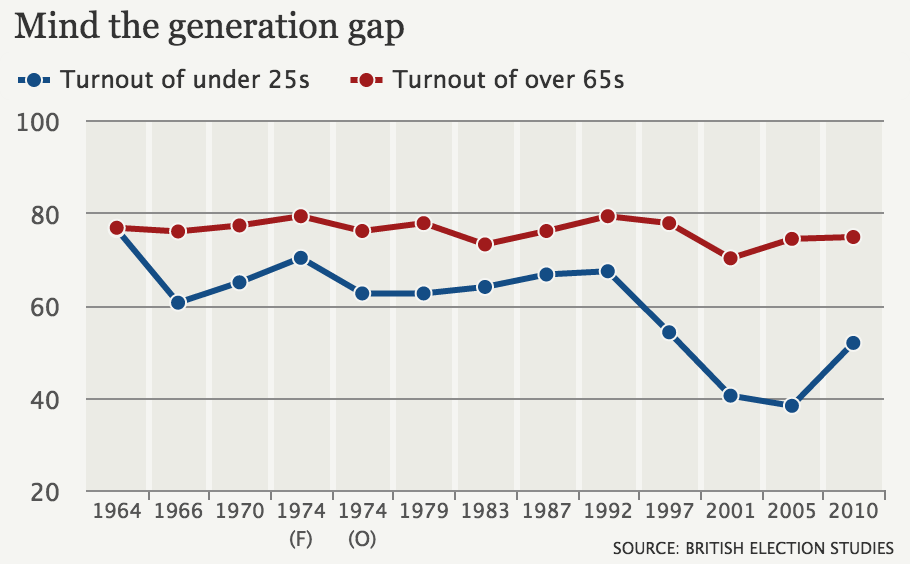 And it’s the fault of a political system that seems to put up barriers preventing the young from voting. A few months ago, a report was published highlighting which MPs were at risk from the student vote in May. While this attracted attention for showing the political threat facing Nick Clegg in Sheffield Hallam, the real story was now how many MPs were at risk but how few. This was not just because young people were reticent about voting.

In 2010, 22 per cent of students were not registered to vote. Thousands more face being unknowingly disenfranchised on polling day in May.

The next election will be the first time that the system of Individual Electoral Registration (IES), whereby voters have to register individually rather than by household, is used. Students can no longer be registered en masse in halls of residence. And because many students move accommodation from year to year, it is harder for Electoral Registration Officers to trace them to encourage them to re-register.

It all sounds very technical. But it will result in a deeply unedifying spectre of thousands of young people marching up to polling booths, only to be told that they do not have the right to vote. IES is not a con by the Conservatives – all parties support it because it is considered to be a safeguard against fraud. But all parties have been slow in recognising the disastrous consequences IES could have on student voting.

While Ed Miliband has earned some credit for raising the issue today, the problem has been known about for years. So has a solution. Sheffield University has liaised with Sheffield City Council to give new students the opportunity to be included on the electoral register when they register at university, thereby making it much easier to be registered to vote. Now, with no new university year before the general election, the damage to student registration numbers can only be mitigated.

And the failure to put enough safeguards in place to ensure students are registered to vote will not be felt only this May. Not voting in one election makes someone significantly less likely to do so in the following election. Add in an ageing population, and today’s young people could face being ignored not just in 2015 but for many years to come.