This article was originally published on the New Statesman’s sister site about cities, CityMetric. Follow it on Twitter @CityMetric

On the face of it, the UK seems to be getting into the fast lane (sorry) when it comes to driverless cars. This month, four British cities began testing the technology, in a £10m scheme launched by business secretary Vince Cable. Next month, transport secretary Patrick McLoughlin is expected to announce that the cars could be on the roads within the next two years.

But now, it looks like MPs may be putting the brakes on (yes, we know). In a poll conducted by Dods, 47 per cent of surveyed MPs said that the government shouldn’t invest any further in driverless car research: 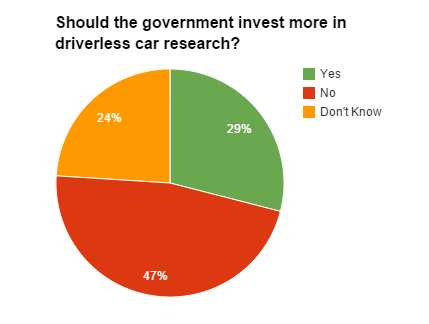 This isn’t great news for the UK’s burgeoning industry: while the development of the cars themselves could be funded by private companies, the government will still need to spend time and money rewriting the Highway Code to reflect the presence of driverless cars on the road. We’ll also need to make changes to insurance policies, since an autonomous vehicle doesn’t fit in with the current system, in which it’s the driver that’s insured and therefore responsible for accidents.

Helpfully, it looks like many MPs aren’t aware of any of this. When asked how driverless cars would affect road safety, 42 per cent said they had no idea… 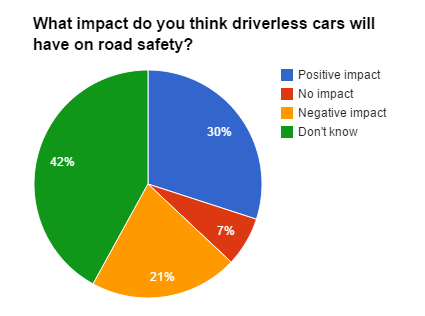 …and when asked how driverless cars could affect the motor insurance industry, 51 per cent said they didn’t know that, either.

Dods’ researchers note that the “resounding statistic” from their study is the “general lack of knowledge amongst our legislators on the impact of autonomous vehicles”.  Might be time to do some reading, guys.