You can read this piece in full on May2015.com – our election site.

To understand the endless Eurozone crisis, a useful fact to grasp is this: the unemployment rate in Germany, the continent’s biggest and richest country, is a fifth of the rate in Greece, its most indebted and crisis-ridden.

Looking at European unemployment rates also helps to make sense of this year’s election, now little more than 100 days away. Debates over policy in this election have so far been familiar, formulaic and vapid. But ever day a battle quietly rages over the economy.

May2015’s Drilldown shows how the Tories lead Labour on the issue. But why are they ascendant? Part of the reason is unemployment. George Osborne presided over more than two years of anemic growth in 2011 and 2012, but the UK’s unemployment rate is now among the lowest in Europe.

5.9 per cent of British job-seekers were unemployed as of November 2014 (per FT.com, where you can track this data in impressive detail). That compares to 10.0 per cent across the European Union (EU-28).

Only two countries have a significantly lower unemployment rate – Germany and Austria – and the UK is still within a percentage point of both of them.

These are the statistics Osborne can use to preface his election Budget. Two years ago he had little to offer. Unemployment had only just fallen below 8 per cent and growth had been either negative or negligible in five of the previous nine quarters.

As the economy improved, its importance fell in voters’ minds. In April 2013 nearly 80 per cent of us thought it one of the three most important issues facing the country. Now only half do. 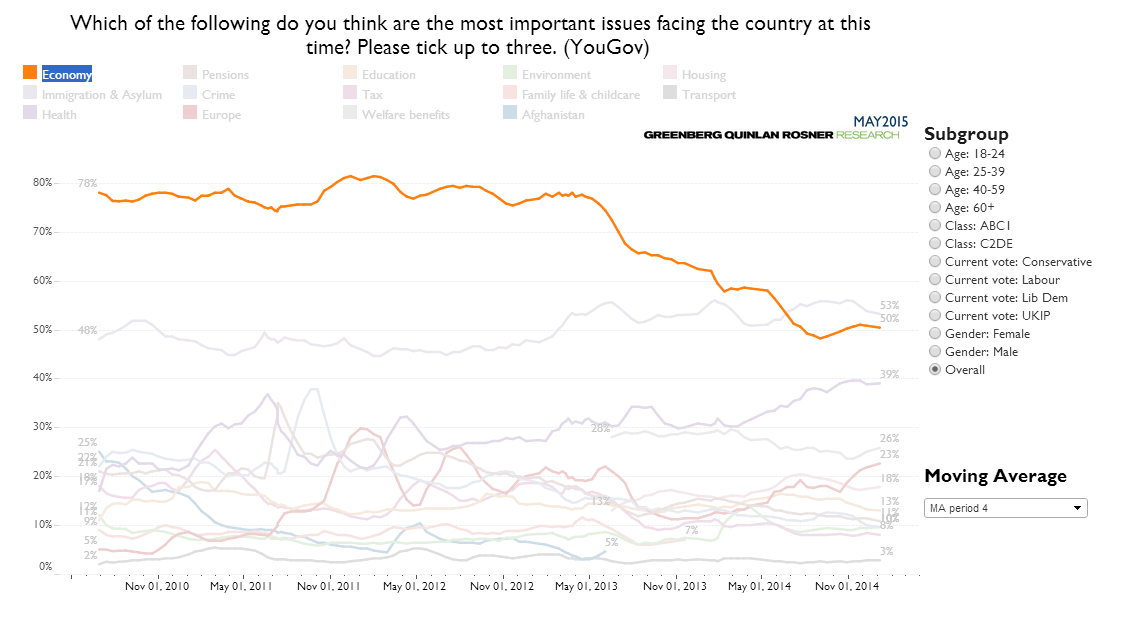 In turn, immigration gradually succeeded it as the greatest issue facing the country (although there is now some evidence voters are tiring of the subject).

One of the subjects which unites both issues is foreign-born workers. How do first-generation immigrants fare in the job market?

In the UK, as in almost every European country, the foreign-born are considerably more likely to be unemployed. The unemployment rate among foreign-born Brits is 8.5 per cent – around 30 per cent higher than the national rate. [1]

That is good compared to most of Europe: foreign-born unemployment is, on average, nearly 80 per cent higher.

The foreign-born are less likely to be employed in the UK, but the differences are nowhere near as stark as in places like Sweden or Belgium.

Both countries have similar unemployment rates to the UK, but foreign-born unemployment is at, or near, 20 per cent. It is less than 9 per cent in the UK.

The graph below maps the national rate (blue line) and foreign-born rate (red bars) on the same graph. [2]

[1] These numbers are for 2013, the most recent year for which EU-wide data is available, and are for unemployment among 20-64 year olds.

[2] Foreign-born data isn’t, as you can see, available for every country.

@harrytlambert
Harry Lambert is a special correspondent at the New Statesman.