In the aftermath of the Rochester and Strood by-election, the focus of the political establishment will be on the impact of the rise of Ukip. Now consistently the third most supported party in the polls ahead of the Liberal Democrats, there is no doubt that Ukip has seized upon a waning in support for the three traditional parties of British politics in the Conservatives, Labour and the Liberal Democrats. The latest Ipsos MORI Political Monitor shows just seven in ten (70 per cent) of those certain to vote would now vote for one of the three main parties, down from 82 per cent even at the beginning of this year – and 90 per cent in the 2010 general election.

It is not only Ukip which is on the rise, however. The Green party has also been making gains in the polls (as have others, including the SNP); while they are by no means at the same level as Ukip, they’re up to 7 per cent of the vote in our latest polling, and had equal support with the Liberal Democrats for three consecutive months from June to August of this year. This year they have averaged 6 per cent of the vote, not far behind the Liberal Democrats, who have averaged 9 per cent. This continues a slow rise for the Greens from 4 per cent in 2013 – but a bigger rise since they received one percent of the vote in the 2010 general election. It is worth pointing out that the Greens did get similarly high scores of 7 and 8 per cent in 1989, however, which was not replicated in the 1992 general election. 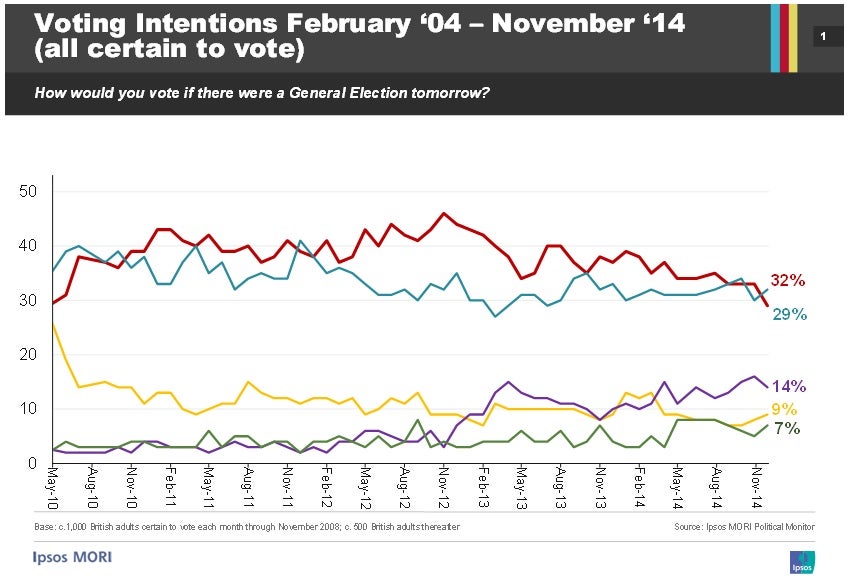 How much longer can Boris Johnson survive?

Nadine Dorries: From I’m a Celebrity to Johnson’s loudest cheerleader

Their rise has not been missed by the Labour party, which has reportedly tasked shadow justice secretary Sadiq Khan with leading a fightback against the Greens. Should Labour be concerned – and are the other parties safe?

We have aggregated Ipsos MORI’s Political Monitor and Issues Index polls for the year to date to explore who supporters of the Green party are, what issues concern them – and how they differ from the other parties.

At first glance, they do not appear to be a major threat to either of the two biggest parties. Just 1 per cent of those who voted Conservative in 2010 and 3 per cent of 2010 Labour voters say they would now vote Green. One in five (20 per cent) of Green supporters say they didn’t vote at all in 2010, compared with an average of 13 per cent for other parties. The bigger threat would appear to be to the Liberal Democrats; one in eight of those who voted for Nick Clegg’s party in 2010 (12 per cent) would now vote for the Green party.

However, the issue for Labour is that these are precisely the same votes they have been benefiting from. Aggregating our Political Monitor polls for 2013 shows one in three 2010 Liberal Democrats (33 per cent) would have voted Labour last year. In 2014, this is now down to 28 per cent. Over the same period, the Green party’s share of 2010 Liberal Democrats has risen from 9 per cent in 2013 to 12 per cent this year.

As with Ukip, the Green party has the potential to cause some electoral headaches for the traditional parties. And there are further resemblances between the two parties, despite what would appear to be a radical divergence in political outlook. 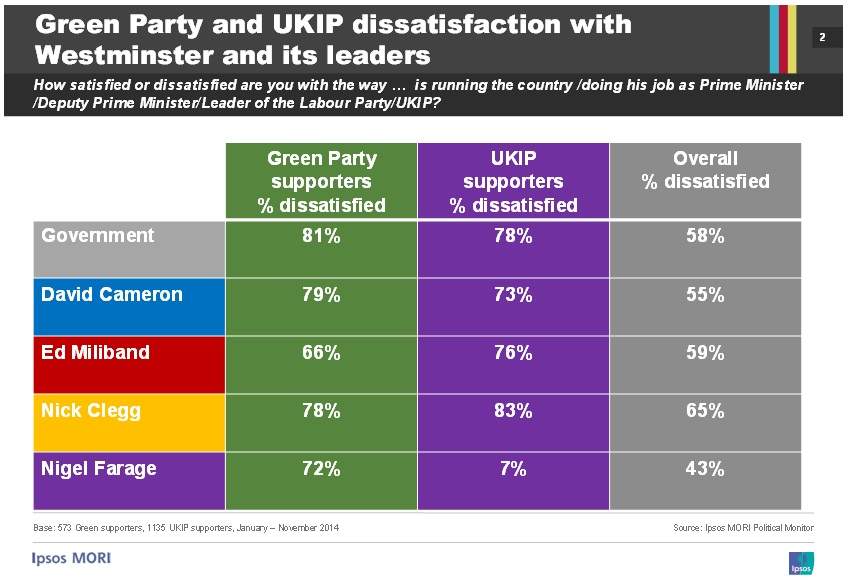 The issues that concern them are also indicative of a wide divergence in political outlook. While the same main issues remain near the top of the agenda across the political spectrum (the economy, the NHS, unemployment), the issues individual to the two insurgent parties vary radically. Three in ten Green voters rank each of the environment and poverty/inequality as among the top issues facing Britain – more than any other party – compared with less than one in ten for Ukip. On the other hand, the concerns especially prevalent among Ukip supporters – immigration and the EU – are particularly low among the Greens. 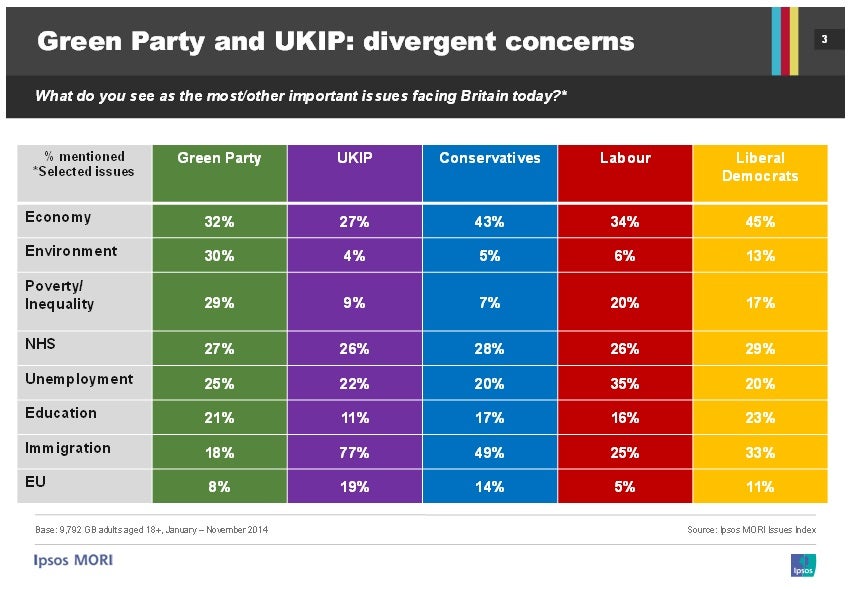 The Green party and Ukip are very different groups of people with, excepting the core issues of the economy, NHS and unemployment, widely divergent concerns. Both are focused on key issues – the environment for the Greens, immigration and the EU for Ukip – which they may feel the political establishment are not taking seriously.

While less heralded and less successful than Ukip have been as yet, the Greens are undoubtedly part of what is already the biggest move away from the traditional parties of British politics in decades – and reflect a support with a distinct set of concerns and priorities.

While Ukip is taking votes from both the Conservatives than Labour, they are causing more headaches for David Cameron than Ed Miliband. The Green party are the reverse of this; an issue for both main parties, as part of a movement away from the two main parties unprecedented in recent times – but a problem primarily for Labour. And while just one in four (27 per cent) Britons think the Green party are ready for coalition, they’re not far behind Ukip on that score (30 per cent) – and backing for their readiness for coalition is higher among Labour supporters (35 per cent) and Liberal Democrats (36 per cent).

Having said that, how much of a problem they will prove to be for Labour at the 2015 general election will probably depend less on the seats the Greens win and more on the extent to which Labour are losing votes to the Greens in marginal seats, affecting Labour’s ability to win seats from the Conservatives – which all contributes to making 2015 perhaps the most unpredictable election in modern times.

Gideon Skinner is head of political polling at Ipsos MORI