I meet Mark Reckless – a tall, unexpectedly retiring individual – at Ukip HQ on Rochester High Street, during my visit last week to the by-election battleground Rochester and Strood, which you can read about on May2015.

Everyone here in this mock Tudor-fronted building on the quaintly Ye Olde main thoroughfare is incredibly excitable – one volunteer bounces up to me to say she, “joined the Hanseatic League, not the Fourth Reich”. I’m not sure, but I think she’s talking about the European Union.

Reckless and I stop for coffee at one of the cobbled street’s many independent cafés. He has noticed the “demographic change” that, since around 2004, there has been “an increasing number of eastern Europeans who moved to the area – not in anything like overwhelming numbers, but in significant numbers.”

He continues: “To the extent that people have concerns [about immigration], I’d say it’s mainly about jobs, and particularly wages.

“Ukip are saying that if we have unlimited immigration, from eastern and, perhaps now more significantly, southern Europe, then that may hold down wages for other people in the labour market . . . I think it’s largely economic, about that competition in the labour market, rather than cultural.”

I present to him some Ukip campaign literature I’ve picked up during my visit. It’s not subtle stuff. In big red letters, it screams on every resident’s doorstep that net migration into the UK is “up to 243,000 in 2014”. 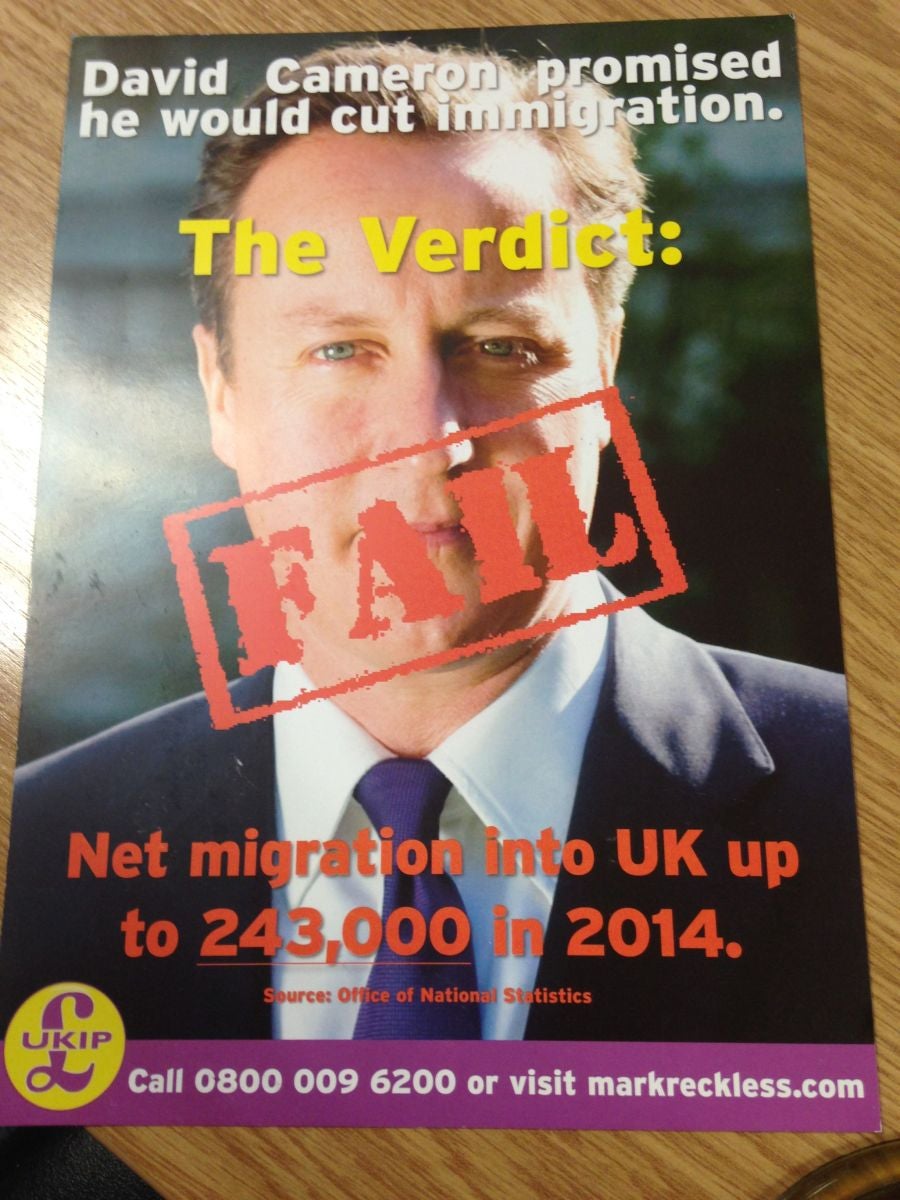 Does this messaging increase tensions rather than heal wounds?

“I don’t think so,” Reckless replies. “I think it’s important that we discuss immigration openly . . . We’re not controlling immigration from Europe, which we’ve got to do. The Prime Minister is making all sorts of promises, and it’s simply not credible that he’s going to control immigration while remaining in the EU.”

Indeed, when I speak to the Tory candidate, Kelly Tolhurst, she is very eager for “action, rather than talk” on EU migrant levels – calling it a “numbers game” – but cannot elaborate on what such action would entail, other than David Cameron’s future renegotiation.

Reckless emphasises the economic problems with which his constituents associate increased migrant labour here. He sees this as more significant than post-industrial decline in Medway. Chatham Dockyard was closed by Margaret Thatcher 30 years ago, which still stings for some constituents I speak to during my visit.

“I think when I first moved here in 2000, I would say back then the closure of Chatham Dockyard still cast a pall over the area.

“I believe that has now disappeared and that the Medway towns have fully recovered from the dockyard closure, even if some individuals haven’t perhaps recovered in the same way, or had their working life marred still by that closure. I’d say overall the Medway Towns have [recovered].”

Reckless tells me uncontrolled immigration was a “significant” reason behind switching his party allegiance: “What I wanted is to keep promises I made back in 2010, saying I’d cut net immigration, I think that’s a sensible policy objective in my view, it’s just in the Conservatives it wasn’t deliverable.” He calls for “proper control applied in eastern and southern Europe; a points-based immigration system that will allow us to be fairer to people from the Commonwealth coming here.”

Reckless hints that if he wins the by-election on 20 November, more of his former colleagues in the Conservative party may defect: “There are one or two Conservative MPs who I’ve had conversations with,” he says slowly, “and I spoke to a number of colleagues who are keeping matters under review; some will be looking very closely at me during the by-election, but whether anyone else will move, I don’t know.”

He criticises his former party’s reaction to his defection, claiming it “rather lashed out as a tribe, sort of geeing each other up in a bit of a bubble in Birmingham [at party conference]”. He tells me the Conservatives “spoke almost as if it [the seat] was their property, they had some sort of right to this constituency, that it was safe and it was theirs and I was taking it away from them”.

The town centre of Rochester, where we meet, was the location a week ago of activists from the far-right BNP splinter group Britain First posing with Ukip campaigners. Ukip has attempted to disassociate itself from the group, and Reckless is emphatic about this: “It’s completely unacceptable. I wholly disassociate myself from Britain First and their frankly unacceptable views. And I’m delighted that Ukip are the only party that won’t allow anyone who’s been a BNP member or similar to join us.”

But does he not find it disconcerting, being new to Ukip, that he is now a member of a political party associated with racists? For example, the party’s leader, Nigel Farage, recently bolstered his political bloc in the European Parliament with a Polish MEP from a party whose leader denies the Holocaust.

Reckless clearly finds such a move distasteful: “Sometimes there is a degree of confusion, personal or otherwise, between the leader of that [Polish] party and the individual who has been admitted to the group,” he replies, carefully.

“But I would refer to the MEPs who’ve made that decision, it’s not a decision I’ve been involved in. And I’m pleased that in Westminster, where I’m seeking to be, if I’m successful, I’ll just sit with Douglas Carswell, and we don’t face the European requirements to sit with other parties with whom we’d prefer not to.”

While walking around Rochester with Reckless, and asking him how differently he is treated by constituents now he’s joined Ukip, he admits he has, “received a few more negative reactions than I had” as a Tory. Tellingly, I hear from a resident who claims to know his builder that, a week before he defected, Reckless had a special fire extinguishing attachment fixed to his letterbox, in case he was posted any explosive devices.

As if on cue, a young father in a checked shirt strides over to Reckless and me, dragging his bored seven-year-old along with him. “I hope you don’t get in. You don’t represent the people of Rochester,” he shouts. “You say you’re not a racist party, but you think Lenny Henry should be deported! You talk about Bongo Bongo Land. It’s a dangerous party, stirring up hatred.”

Reckless splutters, “I wholly dispute your characterisation of Ukip.” But the man carries on: “If you don’t like this country, go and live in Canada, go and live in Australia.”

“Then let other people be happy here. You’re scaremongering and scapegoating,” is the man’s parting shot.

But it appears from Ukip’s double-digit poll-lead that many Rochester and Strood residents would be happy for Reckless to stay living here too.