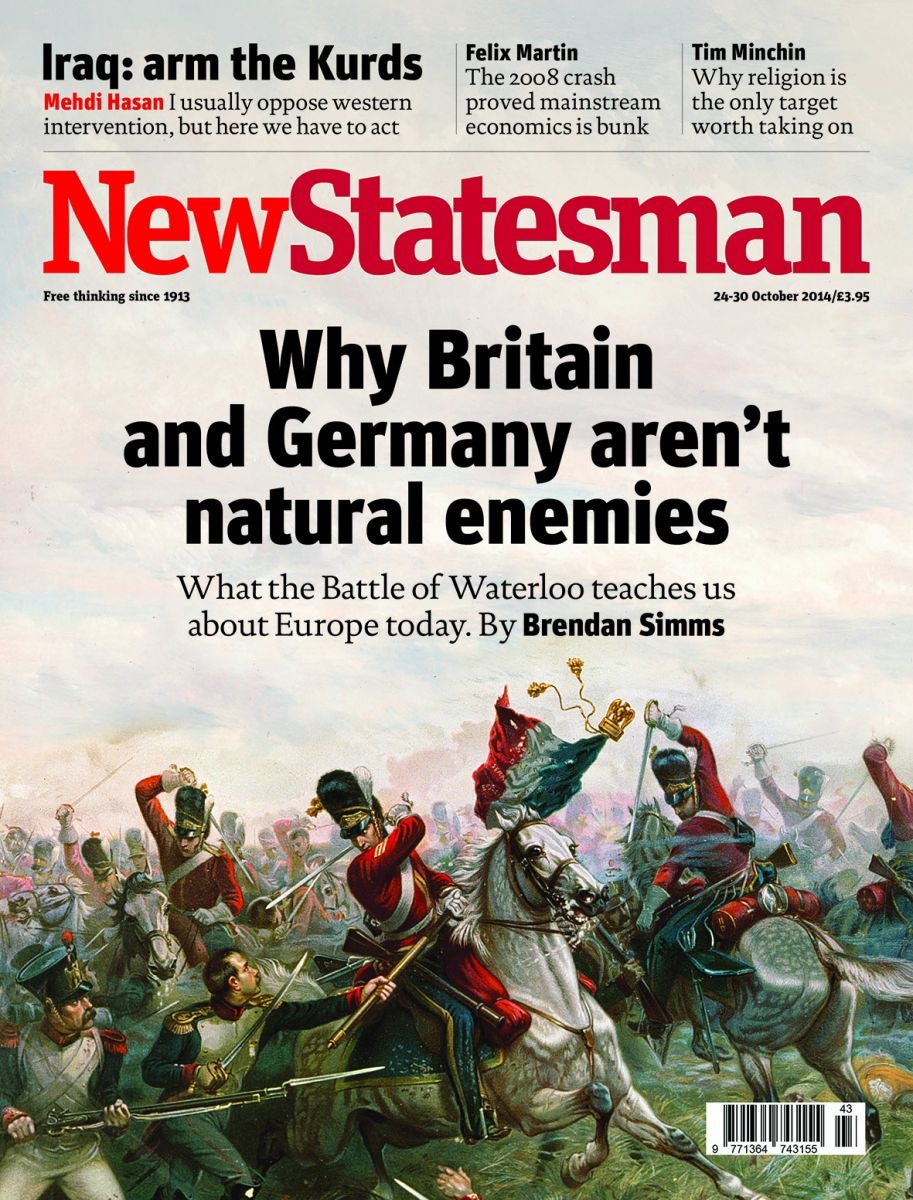 BRENDAN SIMMS: WHAT THE BATTLE OF WATERLOO TEACHES US ABOUT ANGLO-GERMAN RELATIONS

WILL SELF: LABOUR PEERS ARE A “WALKING SOLECISM” AND SHOULD LEAVE THE HOUSE OF LORDS

NAOMI KLEIN ON MOTHERHOOD AND CLIMATE CHANGE: “I WRITE ABOUT GETTING OFF FOSSIL FUELS AND THEN I PLAY WITH MY SON’S TRUCKS”

The Cambridge historian Brendan Simms considers the course of Anglo-German interaction from the Hanoverian Succession of 1714 to the antagonism between the two countries in the European Union today. Before the First World War, Professor Simms points out, England and Germany enjoyed a mutual respect and admiration, and shared in a “common project to defend their own freedoms and the ‘liberties of Europe’”. Simms identifies the Napoleonic wars, when the King’s German Legion was part of the regular British army, as the high point of the Anglo-German project:

France represented an existential strategic and ideological threat to both parts of George III’s patrimony. Napoleon’s ambitions on the Continent were incompatible with the independence of Britain and the integrity of the electorate. His domestic programme struck at the heart of the old order in Germany and at parliamentary liberties in Britain. The battle against “French tyranny” thus became a common rallying cry.

Simms shows how the Battle of Waterloo – in which English, Irish, Welsh, Scottish, Nassauer, Brunswicker, Dutch, Walloon and Flemish soldiers fought side by side – was “truly the first Nato operation”. The bicentenary of the battle in 2015 will have relevance for the European project today, he argues:

Given the severe challenges the EU faces in eastern Europe and the Middle East, and the collective failure to address them by the eurozone generally and Berlin in particular, the King’s German Legion, and especially the 2nd Light Battalion, could serve as the model for a future European army.

THE NS ESSAY: WILL SELF

In a vigorous polemic for this week’s issue, Will Self argues that a misty-eyed affection for our “hazily numinous” constitution has degraded democracy, created an “elective dictatorship” and rendered parliament the “gentlemanly capitalist’s preferred club”. Self finds both sides of the political divide guilty:

It is customary for those on the left to view all the flummery and mummery of the British state as just something we accept as the price of rubbing along. Periwigs and coronets with baubles; black rods and white stockings – these are the froufrous that guarantee our commitment to good old British gradualism rather than the violent regime change that afflicts other countries. For myself, I have always considered anyone who espouses socialism styling themselves as a lord or lady to be a walking solecism – perhaps not on a par with a Holocaust survivor choosing to assume the title SS-Obergruppenführer, but tending in that direction.

Thoroughgoing reform of the principal state institutions is a vital first step towards constitutional change, he argues, and the House of Lords must be abolished without delay:

Why wait? Why don’t all those Labour peers who claim they’ve only taken their seats in the cause of such abolition use this historic opportunity to vote with their feet, renounce their titles and reconstitute themselves as a part of the constitutional convention? I cannot conceive of a more powerful statement in support of democracy; moreover, in so doing, these former lords and ladies would be rejoining the commoners whose rights they say they wish to uphold, and at the same time striking a potentially fatal blow at the elective dictatorship that has progressively degraded democracy, equality, liberty and any semblance of fraternity in this country since the passage of the Parliament Act in 1911.

Sophie McBain meets Naomi Klein, the left-wing activist and author of No Logo and The Shock Doctrine, to discuss her campaign to paint the climate-change debate red. In her most recent book, This Changes Everything: Capitalism v the Climate, Klein argues that the issue of global warming should be used to deliver a “killer blow” to the free-market world-view:

“I do view free-market ideology as essentially a cover story for greed,” she tells me. “I don’t think it’s an ideology that should be taken entirely seriously. I don’t think people come to it for the most part out of intellectual curiosity.

“I think it is a story that is incredibly convenient to elites because it rationalises extremely antisocial behaviour. It’s an ideology I don’t want to make peace with.”

Klein’s growing interest in climate change has coincided with first-time motherhood and she jokes that the two things are not always compatible:

Klein is married to the TV journalist and film-maker Avi Lewis and has a son, Toma, who is two years old and “absolutely truck-crazy”. She visibly cheers at the mention of him. “It’s been hilarious watching this thing evolve, as I’m writing about getting off fossil fuels and then I go downstairs and play with dump trucks.”

THE NS INTERVIEW: TIM MINCHIN ON WHY RELIGION IS THE ONLY TARGET WORTH TAKING ON

The NS’s Helen Lewis meets the composer-comedian Tim Minchin, who has recently broken through as a writer of blockbuster musicals, including the Royal Shakespeare Company’s Olivier-winning stage version of Matilda. Minchin’s aim is to use comedy to encourage a more rational world-view and his stellar success is now allowing him to set his satirical sights on bigger targets. Religion is top of the list:

In religion, Minchin has found the answer to his unique dilemma: that he had run out of upwards to punch [this refers to the satirist’s vocation and duty: to “punch upwards”]. In 2010, he wrote “The Pope Song”, which called the pontiff a motherf***er more than 40 times. This rampant offensiveness is part of the conceit – how dare people be more offended by a swear word than by the Catholic Church covering up decades of paedophilic abuse by priests? The song says, “. . . if you protect/A single kiddie f***er/Then pope or prince or plumber/You’re a f***ing motherf***er”. It’s not subtle, but it certainly makes its point.

Not all of his songs about religion are such brickbats. In 2011, a relatively innocuous Christmas song, “Woody Allen Jesus” (“Short and Jewish and quite political/Often
hesitant and very analytical”), got cut from The Jonathan Ross Show at the last minute. Minchin blamed ITV’s director of television Peter Fincham, writing on his blog: “He did this because he’s scared of the ranty, shit-stirring, right-wing press, and of the small minority of Brits who believe they have a right to go through life protected from anything that challenges them in any way.”

MEHDI HASAN: ARMING THE KURDS IS THE ONLY OPTION

In his Lines of Dissent column this week, Mehdi Hasan observes that with even George Galloway now arguing in favour of arming Kurdish fighters in the Middle East, it is time for western anti-war progressives to support intervention in favour of the revolutionaries defending the town of Kobane, in northern Syria, against the “theocratic maniacs” of Islamic State:

It isn’t a contradiction to be anti-war and left-wing at the same time as being pro-Kurd and in favour of arming the Kurds. I have been a long-standing opponent of western military interventions in the Muslim-majority world, almost all of which – from Afghanistan in 2001 and Iraq in 2003 to Libya in 2011 – have resulted in civilian bloodshed and terrorist blowback. But I’m not a pacifist. And to pretend that the response to the beheaders, rapists and slave traders of the self-styled “Islamic State” . . . need not involve an element of brute military force is either ludicrously naive or disgracefully disingenuous.

In this week’s Politics Column, George Eaton argues that David Cameron’s decision to pursue an immigration-centred campaign, both at next year’s general election and in the 20 November by-election in Rochester and Strood, is a high-risk tactic that could cost the Conservative Party votes:

If many Tories welcome this realignment, others regard it as futile. “If we make immigration the problem, people will always view Ukip as the solution,” warns one. Another says: “We tried it with those ghastly posters in 2005. It didn’t work then and it won’t work now.” Conservative moderates fear that Cameron has embarked on a battle he cannot win. Ukip’s brutally simple offer of EU withdrawal to regain control of the UK’s borders will trump whatever solution Cameron proposes.

The answer, writes Eaton, is to shift the debate back to the safe Tory territory of the economy:

Outplayed by Ukip on immigration and outgunned by Labour on health, the Conservatives desperately need to move the battle to their home ground of the economy. The most recent YouGov poll puts the party 16 points ahead here, the widest gap since the general election. That this has not translated into an overall poll lead is partly due to the continued fall in real wages and the Tories’ enduring image as the party of the rich, but also due to the diminishing importance that voters attach to the economy. As the UK has moved from rescue to recovery, the public has turned its gaze elsewhere: to immigration, to health, to personal finances rather than the nation’s.

Let there be light: the NS film critic, Ryan Gilbey, on Mr Turner and Effie Gray

Kevin Maguire’s Commons Confidential: rumours of a safe seat for Euan Blair – and the Ukip interloper on the front bench