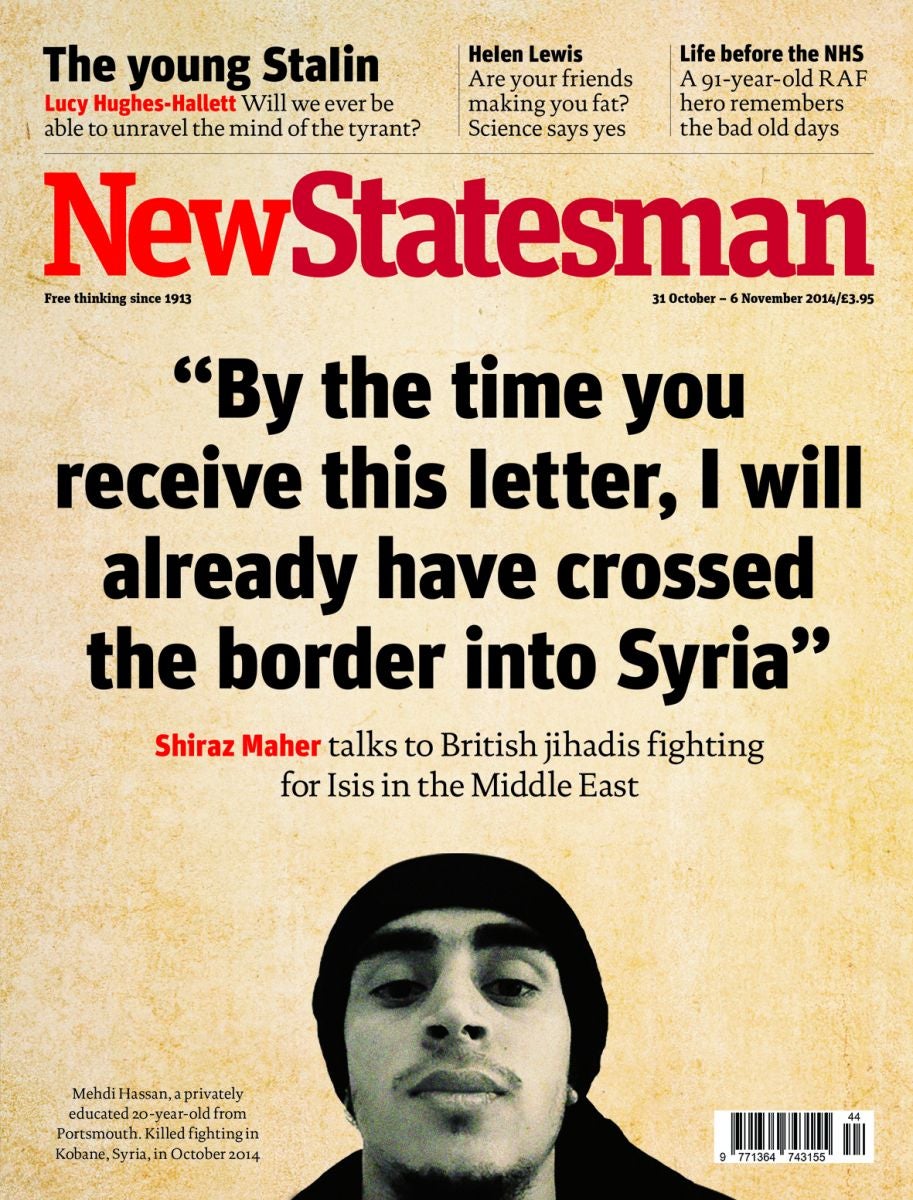 “By the time you read this, I will be in Syria”

Life before the NHS: a 91-year-old war hero recalls the bad old days

Desmond Cohen: how the west made the ebola crisis worse

Helen Lewis: why your friends could be making you fat

From Portsmouth to Kobane: the British jihadis

In a powerful cover story for this week’s issue, the radicalisation expert Shiraz Maher goes inside the world of British radicals fighting in Syria and Iraq. Maher describes the personal relationships he has built up, in his capacity as a senior research fellow at the International Centre for the Study of Radicalisation (ICSR), with jihadis fighting on the ground. He recounts lengthy Skype discussions with men such as Ifthekar Jaman, who grew up in Portsmouth and last year slipped into Aleppo, via Turkey, to join Isis:

Jaman was my first interviewee. It was November 2013 and the weather was miserable as I made my way home from work. He had sent me a message to say that we could do an interview on Skype. This is very rare. Most fighters are happy only to text because of poor internet connections (and, I suspect, their own security concerns).

Several hours after the time he’d told me to expect him, I gave up. Jaman hadn’t called and it was late. I ordered a curry and resigned myself to Friday-night television. Then he rang and there I was – patched in from London to an IS training camp, somewhere in northern Syria.

It was exhilarating: the start of a process in which ICSR began building relationships with fighters on the ground. I nibbled on poppadoms and chutney while he explained his motivations for going.

Maher explains that it was exposure to extreme opinions online, rather than local imams, which radicalised Jaman. He argues that social media has “empowered individual fighters to become recruiting sergeants in their own right” and, most importantly, that it is allowing jihadis to have two-way conversations with potential recruits where once they simply issued edicts:

These interactions help prospective fighters overcome lingering fears and emotional barriers. Fighters are asked, for example, how they broke the news to their parents and how their families are coping with their decision. Others ask what living arrangements are like in Syria, or how to cross the border safely.

Bizarrely, some have even asked whether hair gel is available in the IS stronghold of Raqqa. Lots of practical advice is forthcoming: bring good hiking boots, waterproof clothing and a warm coat; don’t pack radical literature; medicine for an upset stomach is also a good idea; and an iPad is recommended, for keeping in touch with family and inspiring others to make the same journey. (Hair gel, in case you were wondering, is available on the inside.)

Maher also reports on recent skype conversations with Mehdi Hassan, another “Portsmouth boy”, who was killed in Kobane on 24 October:

Mehdi Hassan was the adventure seeker. He was the youngest of the Portsmouth boys by several years and displayed a combination of youthful wonder and self-importance as a member of IS. “Will you write a book about me?” he asked. “Send me a copy please . . . address it to the big tent in the Syrian desert.”

Our interactions were often curt and difficult. He was aggressive and arrogant. I asked him what he thought of the condemnation of IS by al-Qaeda’s leader, Ayman al-Zawahiri. Some of the global jihad movement’s most important theoreticians, such as Abu Muhammad al-Maqdisi or Abu Qatada (who was recently deported from the UK to Jordan), have also chastised the group. “They’ve gone soft,” Hassan told me. He reasoned that they had either lost their way or sold out. He was seven years old when Zawahiri helped plan the 9/11 terrorist attacks.

The NS political editor George Eaton has the inside story on the events which led to Johann Lamont’s resignation as leader of the Scottish Labour party last week.

Lamont’s allies tell Eaton that Ed Miliband is guilty of a “ham-fisted plot”. Some attribute her “brutal knifing” to polls which indicated that the Scottish National Party could win as many as 25 of the party’s 40 Scottish Westminster seats. Others believe Jim Murphy, the shadow international development secretary and now front runner to replace Lamont, was preparing to mount a leadership challenge. Katy Clark, the left-wing MP for North Ayrshire and Arran, tells Eaton:

Eaton notes that Lamont frequently described herself as a “reluctant leader”; her election in 2011 is evidence of the “paucity of talent in Holyrood”, he argues:

For years, even as the devolved parliament has become the defining arena of Scottish politics, Labour’s A-team has remained at Westminster, leaving the reserves to be massacred by Alex Salmond’s championship-winning side.

Erica Wagner meets the author Margaret Atwood at the Ilkley Literature Festival as her story collection Stone Mattress is published. One of the stories—“Torching the Dusties”—explores the issue of generational inequality and Wagner finds that Atwood has some sympathy with disenfranchised young people:

“Wonderful though our automatonised world is becoming, there are a lot of people who don’t have jobs; and those people are young. When you have a lot of young people who don’t have jobs, you are going to get a lot of energy of an angry kind. Older people have built up resources – you know, why don’t we like dragons in The Hobbit?” she asks rhetorically. She is quite fond of rhetorical questions; it’s always worth waiting for the answer. “They keep everything in a great big pile and they sit on it. It’s the same reason we don’t like Scrooge at the beginning of A Christmas Carol: not only is he sitting on a vast pile of wealth, he’s not even spending it on himself. Currency is called ‘currency’ for a reason: it has to circulate. When you block the circulation you get a stagnant state of affairs.”

On the subject of assisted dying Atwood is undecided:

It’s a problem, she says with typical bluntness, that didn’t used to exist. “Once upon a time there were not nearly so many people living to that age; people that old would have been freakish. In the Victorian situation they would have been cared for within the extended family home; in hunter-gatherer societies, should you have someone that old, the group would have cared for such a person – except when they decided, ‘OK, that’s enough,’ and they would choose to go out themselves. ‘I’ve made my contribution, I’m a drag, and now I’m going.’ That’s why I think there’s such a movement right now for death with dignity. People feel they want to be able to choose their exit.”

The baby boomers, as they move into decrepitude, “will want what they have always wanted, which is lots of choice”.

It is at this point that – unchivalrous though it is – I can’t help wondering whether, well, this is something she’s thought about herself. She arches her eyebrows and puts on a high, mock-hysterical, chipmunk voice. “Ooooh! Are we going to talk about dying?” she squeals – but then reverts to a serious, thoughtful mien. “I understand both points of view. Like anything else we do, that kind of choice is subject to abuse.”

Although Atwood is relieved that women authors no longer have to face patronising questions about managing the housework, she believes it is far from a “utopian era” for female writers:

There are a number of younger women writers – but you can’t say they’re dominant. I think it’s more likely to be even-steven these days. And people are much less likely to feel that they are having to jump through a lot of hoops, or that they have to answer questions like, ‘So what about the housework?’ I mean, that used to happen; but I doubt that it happens very much any more.”

Well, I say brightly, surely that’s a good thing. “That is a good thing,” she agrees. “But it may be a little bit unrealistic, in that if you have children, you do have to worry about the housework. It’s not like there’s no more housework. It was never a totally unrealistic question, even though it was, at that time, a condescending question. It doesn’t mean the problem has been solved. It doesn’t mean we’ve entered some sort of utopian era where all of these problems have just gone away or been solved by little robots, because it’s not true.”

Tim Wigmore meets a “chipper” Caroline Lucas at her Westminster office; the Greens’ first and only MP is invigorated by the public outcry which followed a proposal that Ukip, but not the Green party, should be included in the televised general election leaders’ debates next year. Lucas believes that taking part in the debates could prove a “transformational” moment for the party. Wigmore notes she is somewhat defensive on the subject of Ukip’s success:

She says that the media fascination with Ukip “does become a self-fulfilling prophecy” and also pinpoints Ukip’s “massive financial backing”.

At the same time, she concedes that Ukip’s “clarity of message” is “something we can all learn from”.

She continues: “‘Leave the EU’ is a much easier rallying cry than the position of the Greens, which would be to say that the EU’s done some fantastic things, they’ve also done some pretty bad things, so we need to reform it.”

Personal story: life before the NHS

Even now, when I look back to those gaslight days of my boyhood and youth, all I can recollect is hunger, filth, fear and death. My mother called those terrible years for our family, our friends and our nation a time when “hard rain ate cold Yorkshire stone for its tea”.

I will never forget seeing as a teenager the faces of former soldiers who had been broken physically and mentally during the Great War and were living rough in the back alleys of Bradford. Their faces were haunted not by the brutality of the war but by the savagery of the peace. Nor will I forget as long as I shall live the screams that fell out of dosshouse windows from the dying and mentally ill, who were denied medicine and solace because they didn’t have the money to pay for medical services.

Smith, who has recently published a memoir–Harry’s Last Stand: How the World My Generation Built is Falling Down and What We Can Do to Save it—sees a parallel between the austerity measures of his youth and today’s government cost-cutting:

Like today, those tragedies were perpetuated by a coalition government preaching that the only cure for our economic troubles was a harsh austerity, which promised to right Britain’s finances through the sacrifice of its lowest-paid workers. When my dad got injured, the dole he received was ten shillings a week. My family, like millions of others, were reduced to beggary. In the 1930s, the government believed that private charities were more suitable for providing alms for those who had been ruined in the Great Depression.

Lucy Hughes-Hallett on the Young Stalin: can we ever unravel the mind of the tyrant?

TV critic Rachel Cooke: with The Missing, the BBC squares up to Broadchurch

On Location in Plymouth: Will Self enjoys the Devonian capital’s derring-do