“Digital asylum-seekers” is Stella Creasy’s striking and damning characterisation of governments past and present. With a nod to the writing of Don Tapscott1 and others on the division between digital natives and digital exiles, the shadow business minister argues that policymakers often misunderstand their role in the new economy.

Speaking at a New Statesman/Google fringe event at last month’s Labour party conference – “Can a Progressive Britain Be Downloaded? What Does Tech Offer Social Justice?” – Creasy said: “If I hear another person tell me that what we need is a specialist digital adviser [I’ll scream]. That’s like having a specialist telephone adviser.” The role of governments, she said, is to “crowdsource”, not “crowd-control”; to understand digital not as a technology but as a way of working; and to create the environment in which “creativity can be unleashed”.

It was a theme taken up by Creasy’s fellow panellist Anthony Painter, director of institutional reform at the RSA, who said that governments should not try to usurp a vibrant digital ecosystem. Instead, they should “provide a steer”. As Painter said: “Every age has its technological change that throws up opportunities and threats and it’s up to us how we respond to it.”

One way the government can respond is by enhancing the digital skills of the population as whole, and not just the privileged few. According to the Tinder Foundation2, an organisation that promotes digital inclusion in the UK, 11 million of us lack the skills to take advantage of the internet’s promise.

Verity Harding, Public Policy Manager at Google UK, believes that governments can play an “incredibly positive role” and she challenged politicians to create the environment that will deliver the most digitally literate society for Britain by 2020. “It’s really no different to opportunity generally. We all believe that every kid needs to be able to read and write,” she said. “Being digitally literate is the third skill people will need.”

Harding said it was not just altruism that had led Google to this conclusion. “We want the greatest pool of talent. We want the best engineers. And unless every child out there can learn those skills, that pool of talent is massively restricted.”

Creasy added: “We know that two-thirds of those who aren’t digitally literate are from poorer backgrounds. We should see that in the same way as we see basic GCSE results because [children’s] potential and opportunity to succeed in life is stunted as a result.”

The internet both demands these skills and provides a platform to enhance other talents, Painter noted. “One of the biggest learning platforms today is YouTube,” he said. “Whether it is learning to play the piano or the guitar, learning how to bake an aubergine or do DIY, it’s on YouTube. The question then is what happens after that – how do you engage with learning communities? How do you then demonstrate that competence in a work environment? Maybe it’s time for a big, open institutional platform where people can feed in their skills and there is accreditation to demonstrate that.”

And maybe there is a role for governments in creating that platform. Another way our political institutions might engage, suggested a member of the audience – John Slinger, strategic communications consultant and chair of Pragmatic Radicalism – would be by introducing electronic voting for the smartphone generation. Neither Painter nor Creasy was convinced.

“I’m not sure voting should be the primary measure of engagement,” Painter said. “I’d be more interested in getting an understanding of the kind of dialogue young people use and I’d imagine quite a bit is issues-based.” He cited research carried out with college students after the London riots of 2011 which found sophisticated levels of political understanding.

“Young people have always been political,” Creasy said. “What they are not doing is engaging in traditional forms of politics.

“We miss the bigger problem here if we think it’s about process. Fundamentally, it is a question about purpose. We should experiment with new forms of voting but I don’t think it’s going to make a single new person vote. Fundamentally, what’s going to get people to vote is a sense of why, rather than how we do it.”

Creasy, who is the MP for Walthamstow (Labour) in east London, reserved some of her criticism for politics closer to home. She said the left needs to rethink its approach to digital – and that means embracing competition as well as collaboration. “Sometimes on the left we haven’t understood the interaction between the two. That is, you can create a springboard from collaboration and then, with competition, you expand on creativity. What we have to acknowledge is that it is always disruptive.” 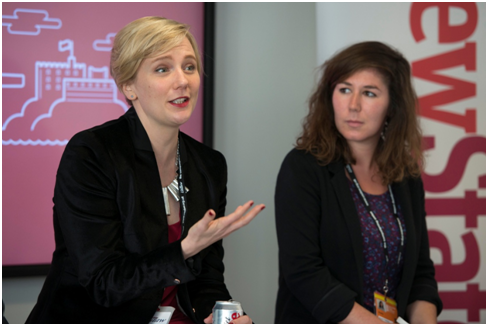 Stella Creasy, MP for Walthamstow and shadow minister for business, innovation and skills, with Anoosh Chakelian, acting editor of The Staggers and the event chair (New Statesman)

An example of that disruption is Uber, the smartphone app-based taxi service. Policymakers, not just here but around the world, are struggling to balance the rights of this new entrant with incumbent taxi operators and to make sense of it all in the context of existing regulations that don’t appear fit for purpose.

“No one is saying we don’t need rules in this new economy,” Creasy said, “but we need new rules that make sense in the world to come.”

“Can a Progressive Britain Be Downloaded? What Does Tech Offer Social Justice?” was convened by the New Statesman and hosted by Google in Manchester on 22 September 2014. 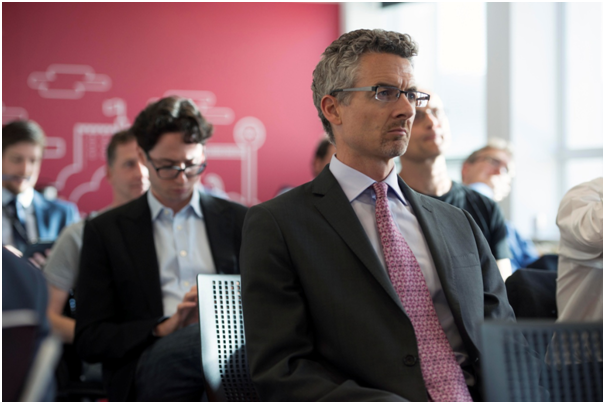 Members of the audience at the New Statesman Labour fringe event in partnership with Google.