Follow May2015.com for the daily election news, polls and predictions. 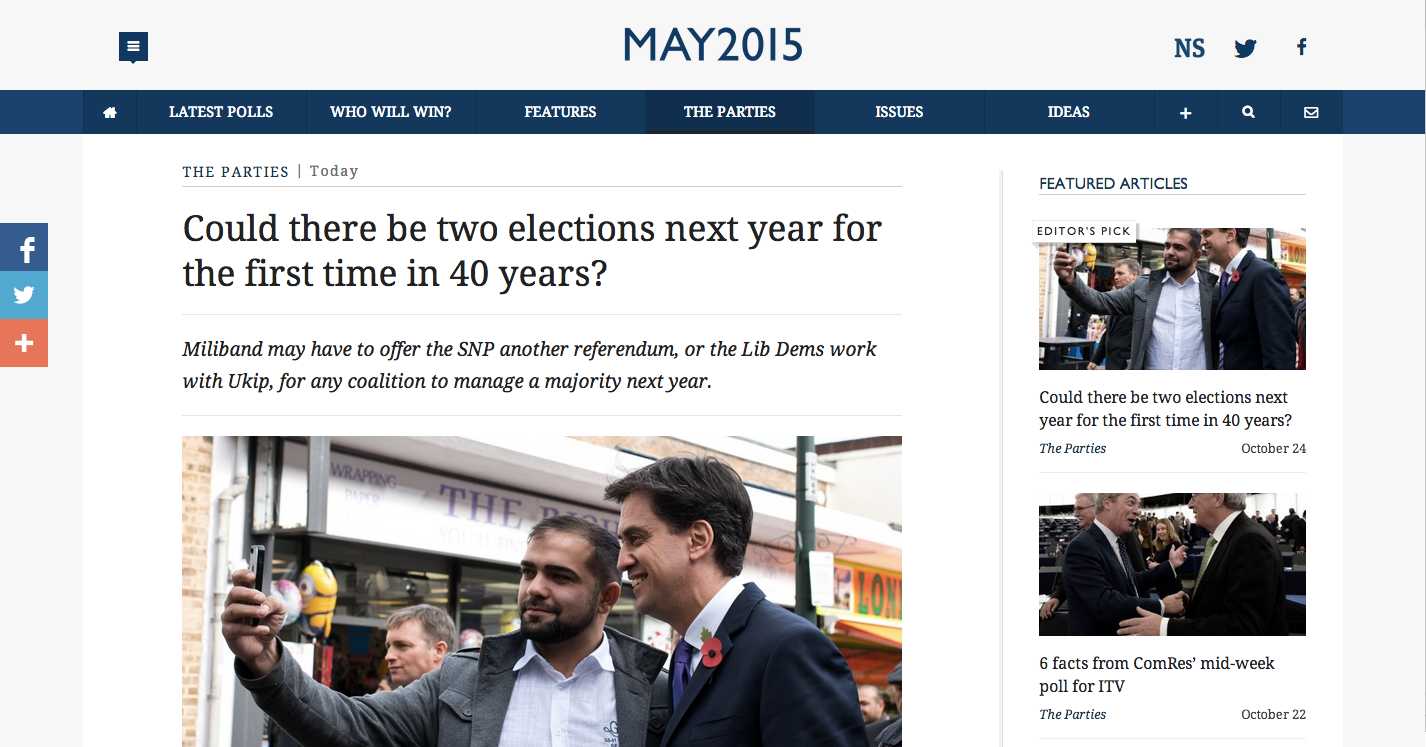 After hearing some of May2015’s back-of-the-napkin maths, Ladbrokes has opened a market on there being two elections next year.

How might this happen? It’s conceivable that no two parties could form a majority coalition.

A minority, single-party government would have little legitimacy, given Labour and the Tories are set to win less of the vote next year than “other parties” (Lib Dems, Ukip, others, nationalists, the Northern Irish parties) for the first time.

If a two-party coalition also fails to make a majority, Cameron or Miliband could return to the polls.

In 2010 the Tories won 307 seats, Labour 258 and the Lib Dems 57. The Greens won 1, the SNP 6, Plaid Cymru 3 and Northern Irish parties 18. Since then three seats have changed hands: Labour lost Bradford West to George Galloway, but won Corby from the Tories, and the Conservatives have now also lost Clacton.

Using Ashcroft’s polls, the best if limited source on how the parties are faring in individual seats, allows us to estimate how this may change.

First, there is the swing from the Conservatives to Labour. There are 59 seats where the Tories have a majority of less than 10 per cent and a 5 per cent swing to Labour would hand Ed Miliband’s party the seat, from Warwickshire North (majority 0.1 per cent) to Great Yarmouth (majority 9.9 per cent).

Ashcroft has polled 30 of these seats in four batches, in May (the first twelve with the smallest Tory majorities), July (the same group again), August (the next eight, the 13th to 20th marginal seats), and October (the next ten, the 21st to 30th).

Labour are ahead by at least seven points in 19 of them. In the other 11 they hold slender leads in nine of them, are tied in one and trail in one. If we exclude Thurrock, where Ukip threaten, we are left with ten. If we crudely estimate that Labour and the Tories will each win half of these toss-ups, we have handed Labour 24 Tory seats.

We have little idea how the next batch of 29 Tory-held Labour targets will play out. If we make a pessimistic forecast for Labour, and assume the improving economy and gradual tightening of the polls will help the Tories hold onto far more of these seats than in the first batch of 30, we could say that Labour will win another five.

That gives Labour 29 Tory seats, and puts them on 287 seats and the Conservatives on 276.

The chart below shows the Labour lead in these seats according to Ashcroft’s polls. The light red line shows how the average lead has changed with each batch.

The Tories can make up some of these losses by taking Lib Dem seats. On the surface, they seem more likely to gain from the likely Lib Dem collapse than Labour. Of the 27 seats where the Lib Dems have a majority of less than 10 per cent, the Tories came second in 2010 in 19 of them.

But the Lib Dem collapse is far greater in seats where Labour offer an alternative than ones where the Conservatives do.

Nevertheless, there are five seats where the Tories lead the Lib Dems by at least six points (Ashcroft has polled 15 of the 19 Tory-second Lib Dem seats). If we give all these to them, and split the six where Ashcroft shows a toss-up, the Tories take eight Lib Dem seats (three of the other four look set to stay Lib Dem, one may go to Ukip).

Ashcroft has polled nine Lib Dem seats where Labour threaten. In seven of them Labour lead by at least 12 points: in four of the eight where they were within 10 per cent of the Lib Dems in 2010, and three others where they are threatening Lib Dem majorities of 12 per cent.

We don’t have data for the other four seats where the Lib Dems have a majority of less than 10 per cent over Labour. Two are in Scotland and should be considered separately, but we can expect two (Burnley and Birmingham Yardley) to swing to Labour, given they lead in these other English seats with 12 per cent Lib Dem majorities.

Labour are also challenging Clegg’s party in Cambridge and Bermondsey, where the Lib Dems have even larger majorities. If we give Miliband’s party one of these seats, and add them to the nine above, Labour pick up 10 from the Lib Dems.

The Lib Dems losses are expected to be more severe – with most predictions putting the party on 25-30 seats. Much depends on Scotland. There are five seats (Dunbartonshire East, Edinburgh West, Gordon, Caithness Sutherland, and Inverness Nairn) where Labour are within 20 per cent of the Lib Dems, but it’s unclear whether Lib Dems MPs like Danny Alexander will be threatened in Inverness.

His majority is similar to the party’s in Bermondsey, where Ashcroft’s September polls suggested a 36-35 Lib-Lab race, but until Ashcroft polls Scottish seats, which he will be doing in the next couple of months, we have little idea of how Scotland will swing.

However, as we detailed earlier this week, the SNP seem to be far more of a threat in post-referendum Scotland than the bookies suggest.

The SNP seem to be far more of a threat in post-referendum Scotland than the bookies suggest.

In 2010 the SNP won 20 per cent, and Labour 42, in the general election. Those numbers were fairly consistent until a year ago, when YouGov’s sub-polls were putting the SNP on 23 and Labour on 41.

The fairly limited models we have – uniform swing and one another – suggest the SNP would win around 40 Scottish seats based on YouGov’s sub-polls. Until we have Ashcroft polls these forecasts will remain guesswork, but for now we can imagine the SNP take 5 seats from each of Labour and the Lib Dems.

Finally, it’s possible to see Ukip winning ten seats. They have already taken Clacton, lead in Rochester, and are competitive in eight other seats, going by Ashcroft’s numbers (five Tory seats, three Labour and one Lib Dem). And this excludes seats where demographics suggest they could do far better than their 2010 vote implies.

To form a majority coalition you theoretically need 326 seats, as they are 650 in the House. But five of Northern Ireland’s 18 seats are held by Sinn Fein, who don’t sit, and one Tory MP is the Speaker, John Bercow.

That means you only really need 323 seats. Under our forecast a Lab-Lib coalition get to 322. Another Con-Lib pairing gets to 312. Adding the DUP, who are occasionally mooted as potential Tory partners, would put them on 320.

But neither of these groupings would have a majority. The two main parties may need to convince either the SNP (Labour) or Ukip (Tories) to join a Lab-Lib or Con-Lib-DUP coalition.

It’s inconceivable that the Lib Dems and Ukip would govern together, but a Con-Ukip-DUP coalition would only get to 297 under our estimate.

The price of any SNP coalition may be a second Scottish referendum, which could be too high for Ed Miliband to make a deal. If neither he or Cameron can cobble together a government, they could agree to call a second poll for later in the year.

The Fixed Term Parliament Act slightly complicates this picture. But the possibility seems greater than ten per cent, which is what Ladbrokes’ odds imply.