As the Scottish independence referendum approaches on Thursday, our three main pro-Union party leaders have pledged more power to Scotland.

David Cameron, Ed Miliband and Nick Clegg have signed a pledge, published on the front of today’s Daily Record paper in Scotland, promising to devolve more powers to Scotland – if it rejects independence.

Here is the newspaper’s frontpage: 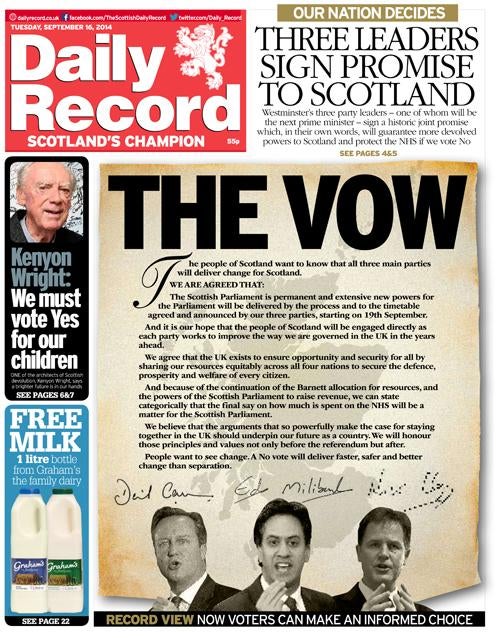 If that type’s too small for you, here’s what it says:

The people of Scotland want to know that all three main parties will deliver change for Scotland.

WE ARE AGREED THAT:

The Scottish Parliament is permanent and extensive new powers for the Parliament will be delivered by the process and to the timetable announced by our three parties, starting on 19th September.

And it is our hope that the people of Scotland will be engaged directly as each party works to improve the way we are governed in the UK in the years ahead.

We agree that the UK exists to ensure opportunity and security for all by sharing our resources equitably across all four nations to secure the defence, prosperity and welfare of every citizen.

We believe that the arguments that so powerfully make the case for staying together in the UK should underpin our future as a country. We will honour those principles and values not only before the referendum but after.

People want to see change. A No vote will deliver faster, safer and better change than separation.

This joint declaration reads more like the leaders’ multiple last-minute pleas for a No vote of recent days than a manifesto. But there is a hint of meat in their pledge. According to the BBC’s analysis, it has three parts:

All three parties are talking about greater tax powers being devolved to the Scottish Parliament. The exact change of powers is unspecified because the parties first have to agree to the details. So at present it’s very vague, something the SNP has jumped on today, dismissing “The Vow” as a bribe and a sign of last-minute panic.

But the NHS point is important. Scotland’s First Minister Alex Salmond has been making claims about Westminster threatening the NHS in Scotland’s survival, something my colleague George Eaton points out here as “nonsense”.

It is true that Westminster’s leaders have been discussing devolution of new powers for months. Cameron told the BBC’s Newsnight last night that, “I always said right from the start of this campaign, if Scotland voted ‘No’ to separation, the rest of the United Kingdom would say ‘Yes’ to further devolution”.

However, the way this latest pledge has been made does show panic over the imminent referendum. Brown’s announcement to Scotland came on the hoof, apparently without consulting the current Prime Minister. An unprecedented act.

Also, William Hague, when filling in for Cameron during Prime Minister’s Questions last week, said something rather revealing about this devolution plan. Trying to quell a Tory backbencher’s concerns about too much devolution, too fast, he said the leaders’ pledge was “not a statement of government policy”, and more akin to the promises made when leading up to a “general election”. Ie, less trustworthy.

Lastly, the parties should have agreed on the details in advance of the vote. This vague declaration is now too easy a target for Salmond and his supporters.

I have heard from a senior Labour party figure that the parties are concerned that a Yes vote will take place, and are therefore finding it difficult to concentrate on their upcoming party conferences. They don’t want to sound like they are “on another planet, just obsessed with Westminster issues”.

So it’s likely the three parties will focus their time, or at least look like they are, from now and immediately beyond the referendum result, on attempting to agree the specific powers they will hand to Scotland, even if the details are unclear at present.