Employment tribunal statistics published by the Ministry of Justice this week have revealed a stark 70 per cent fall in individual claims between April and June 2014, relative to the same period in 2013. The figures reinforce the perception of the fees as a “tax on justice“, with TUC general secretary Frances O’Grady saying that “Britain’s bad bosses are getting away with harassment and abuse of workers”.

The fees were introduced in July 2013 by the coalition in response to pressure from the private sector, which sought to reduce what were perceived to be “frivolous” claims which cost the taxpayer thousands in legal fees. However, with individuals having to pay up to £1,250 to bring their employer to a tribunal, there has been such a marked decrease in cases that it is extremely unlikely that only frivolous cases have been discouraged. Rob Wall, the head of the CBI’s head of employment policy, told the Independent: “We have never called for the level of fees the government has introduced.”

The report states that the data is subject to later revision as it is now policy for cases only to be recorded when fees have been paid (and that the numbers above are therefore likely to be revised upwards) but, since the key issue is that employees are being discouraged from ever filing tribunal claims in the first place, these revisions are unlikely to compensate for much at all of the drop that has been observed.

The following graph from the report details the total number of cases brought by individuals and by groups between April 2012 and June 2014 – the effect of the introduction of fees in July 2013 is immediately clear: 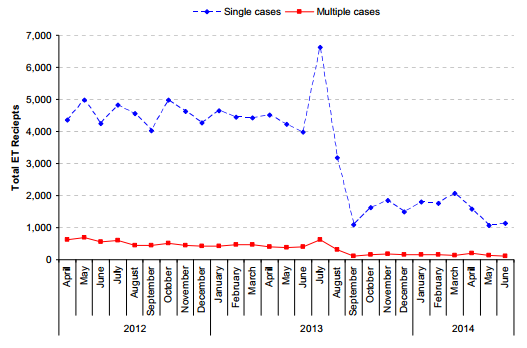 When the previous quarter’s figures were released, Michael Reed, the principle legal officer at the Free Representation Unit, pointed out that there was no significant change in the ratio of employers winning cases versus employees winning cases when comparing pre- and post-fee periods. If the fees were truly discouraging weak cases then employers should be winning fewer cases as a proportion of the total under the new system. The latest quarter of figures show similarly show no significant change with the period before the fees were introduced – while the 2011/12 statistics show that employees won 18 per cent of cases and lost 22 per cent (averaged across all categories), the new report has them winning 16 per cent and losing 25 per cent.