The idea that entertainment has an effect on our politics might seem ludicrous to some. Many would scoff at the notion that the Star Wars saga might have influenced the political socialisation of Generation X. Or that the music that the baby boomers listened to played a supporting role in the development of that generation’s politics.

And perhaps, most ridiculous of all, is the idea that J K Rowling’s immensely popular tale of the boy-who-lived could have played a role in the political development of that generation, the Millenials. Let alone an election result. But this is exactly what some recent research of mine indicates.

I found empirical support for the idea that the Harry Potter series influenced the political values and perspectives of the generation that came of age with these books. Reading the books correlated with greater levels of acceptance for out-groups, higher political tolerance, less predisposition to authoritarianism, greater support for equality, and greater opposition to the use of violence and torture. As Harry Potter fans will have noted, these are major themes repeated throughout the series. These correlations remained significant even when applying more sophisticated statistical analyses – when controlling for, among other things, parental influence.

I’m not saying, Rita Skeeter like, that “Harry Potter helped Obama get elected” or that “Harry Potter books brainwashed millennials”, as much of the coverage of my research indicated. It’s of course much more nuanced than this. And in a world where consumption of entertainment media is escalating, allowing many to avoid news coverage altogether in favour of fun, thinking about this is more important than ever. Scepticism of the notion that our entertainment consumption shapes our political perspectives only has traction if you think that we arrive at our political views rationally. And there’s a long record of research in multiple disciplines (psychology, sociology, and political science to name a few) that thoroughly debunks the notion that we acquire political values and attitudes through a rational process.

And research into how we immerse ourselves in stories has demonstrated that we do not process ideas in entertainment the same way we process information – we react on a more emotional level, at a distance from real world facts.

The next scornful retort is that people’s choice of entertainment will reflect their pre-existing political views. But the argument of selective exposure – that we only consume media that is congruent with our existing beliefs – is less applicable to entertainment than it is to overly political media.

We’re often drawn to stories for reasons that may have nothing to do with our views. This may be its popularity, attention given to it in the media, critical reviews, special effects, advertising, boredom, inadvertent exposure when we have little choice – the reasons go on. And once we’re immersed in the book, TV programme, film or whatever, once we’ve come to identify with certain characters we are, as communications scholars have demonstrated, likely to internalise the lessons of the narrative, and emulate the qualities of those with whom we identify.

Selective exposure is also complicated by the fact that the politically relevant lessons of a narrative or the qualities of fictional characters are not always evident early on in the story. And they may evolve throughout it. Take that of Darth Vader, a cultural icon of evil, for example – he turns out to still have some good in him at the end. Or there’s the Cylons of the recent reimagining of Battlestar Galactica, who evolve from genocidal robots to a form of intelligent life deserving acceptance and tolerance. 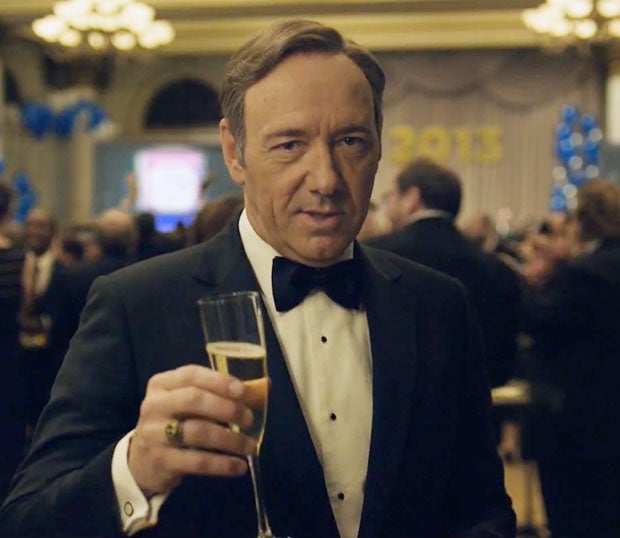 Kevin Spacey’s House of Cards is a dark take on US politics. Image: Screenshot from trailer

Selective exposure is also less likely to occur among younger media consumers who have yet to fully form their political views. This is a point especially applicable to the media teenagers consume, like the Harry Potter series.

A great volume of research has been devoted to the effects of entertainment on social phenomena such as violence, sex, smoking and drinking. In this light, perhaps it doesn’t seem so ridiculous to give some attention to how entertainment shapes our politics. There have been a handful of published pieces that demonstrate the role of entertainment media, but more empirical research is needed.

There are certainly methodological issues with teasing out entertainment media effects, but those difficulties have not stopped researchers on other similarly sticky subjects. We need to consider the role of entertainment media in the development of political perspectives, in how citizens see their governments, leaders, and policies. This is something that is ever more important in our era of unlimited media choice.

Anthony Gierzynski does not work for, consult to, own shares in or receive funding from any company or organisation that would benefit from this article, and has no relevant affiliations. This article was originally published on The Conversation. Read the original article.