We are frequently told that earnings are the black spot on the otherwise positive labour market story, but in truth they are also the blind spot. The reason is that none of our official earnings measures captures the growing ranks of the self-employed, who now make up one in seven workers.

This seems incredibly lop-sided when we consider the significance of the self-employed in our understanding of the employment recovery. Without this part of our workforce – now totalling 4.5 million people – it would have taken more than a year longer for the employment lost during the recession to be regained, and there would be 700,000 fewer people in work today. The self-employed are therefore central to our interpretation of the jobs numbers, yet they are strangely absent from the debate on earnings.

This blind spot isn’t just an academic one. Earnings data is a crucial policy indicator, not least the setting of interest rates by the Bank’s Monetary Policy Committee. As a result, we pore over every 0.1 percentage point rise or fall in the rate of earnings growth, when the inclusion of the self-employed could change the picture far more dramatically.

To demonstrate how far from the mark we may be, new Resolution Foundation research estimates what our regular earnings data might look like with the self-employed included. The findings are by no means definitive – the lack of timely and reliable data on self-employed earnings precludes this. Rather, they provide an informed ‘best guess’ that is nonetheless striking in its implications.

We estimate that official measures, by capturing only employees rather than all workers, may have understated the size of the real earnings squeeze during the downturn by at least 20 per cent. In cash terms, average weekly earnings may be around £10 lower than we currently think. 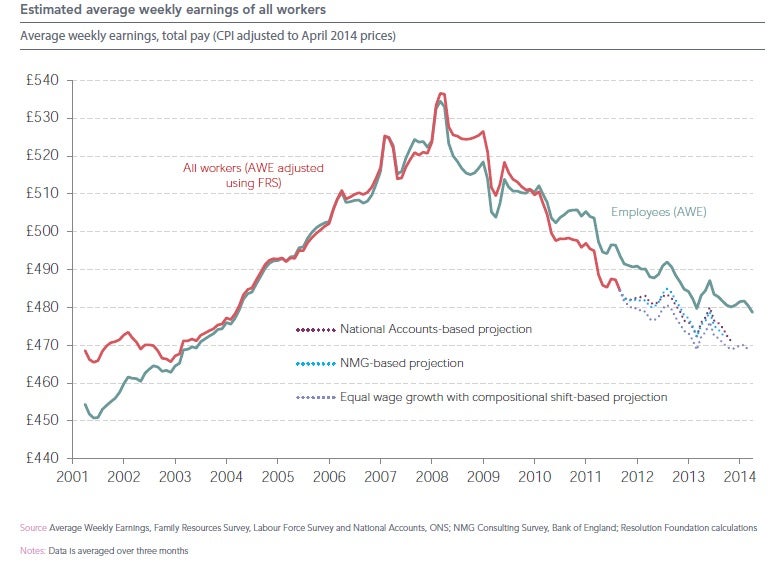 Driving this gap between all worker and employee-only weekly earnings is the fact that the self-employed were hit far harder during the early years of the downturn. Explanations for this may include falling hours among the self-employed (not seen among employees), and strong self-employment growth among women and lower-paying sectors and age groups. In addition, we may have seen the self-employed responding flexibly to lower demand and taking a financial hit but sticking with it, whereas some employees lost jobs and were taken out of earnings altogether.

Whatever the reasons, the implication is that there is even more lost ground to be recovered than we thought. But it’s also reasonable to think that our current earnings indicators will underestimate the pace of this recovery. As the economy strengthens, it seems likely that average self-employed earnings will bounce back more quickly as those who are struggling the most move into employee jobs, and those who have held on up their hours and rates. The point is that incomplete data can cause both upside and downside mistakes, and when the data is driving policy thinking, such mistakes will come at a price.

Measuring self-employed earnings in a timely way may be less straightforward than capturing employee wages, but it’s high time we had a go. We call for the inclusion of the self-employed in our official earnings data alongside existing measures, and offer initial suggestions as to how we might do this (for example, by exploiting existing regular surveys of the labour force or tapping into HMRC data on tax receipts). Statisticians within and outside Whitehall will have a range of creative solutions to this problem and it is time we engaged them in this project. While we push for this to happen, we will continue to publish our ‘best guess’ so that we are not completely blind to earnings across the workforce.

Significant economic and monetary policy decisions are made on the basis of our official data – it ought to be fit for purpose.

Laura Gardiner is senior policy analyst at the Resolution Foundation