The Daily Mirror leads on the news that Nick Clegg is calling for the bedroom tax to be scrapped. Even by Lib Dem standards, it’s a dramatic U-turn that abandons any pretence of collective responsibility. 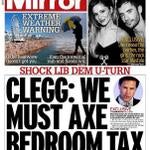 But read the accompanying piece and it becomes clear that the position is more complex than presented. Rather than arguing for the policy to be abandoned (after a DWP analysis this week found that nearly 60 per cent of the 550,000 tenants affected are in rent arrears and only one in 20 have been able to move to a smaller home), the Lib Dems are in fact calling for it to be reformed.

Danny Alexander writes in the paper that disabled adults should be exempt from the measure and that no one should have their housing benefit cut unless they are offered a suitable smaller home. But this fall shorts of demanding that it is abandoned altogether (Labour’s position). The principle that housing benefit should be reduced for those social housing tenants “under-occupying” their properties remains.

Significantly, however, the Lib Dems are reportedly happy with the “axe” headline. If so, they’ve created a major hostage to fortune. Should Labour table a motion proposing the abolition of the bedroom tax (as it surely will), they won’t be able to support it.

As a Liberal Democrat I want everyone to have the opportunity to have a secure and decent home.

We brought in changes to how housing benefit is calculated in the social housing sector with the best of intentions.

However, a recent report shows people are having to cut back on household essentials despite the help offered through Discretionary Housing Payments.

Therefore, we have reviewed our position so only those already in the social rented sector who turn down suitable smaller homes will see a reduction in their benefit.  These commitments will be in the Lib Dem manifesto and we will push for it as government policy right away.

This change, combined with a commitment to build 300,000 houses a year in the next Parliament, will build on the progress we have already made to address Britain’s housing problem.

All the Chief Secretary to the Treasury has done is formnally embrace the policy adopted by the party at its autumn conference last year. The motion passed by delegates called for “a redrafting of clear housing needs guidelines in association with those representing vulnerable groups including the disabled, elderly and children”. It also argued that, until new guidelines are in place, there should be no withdrawal of housing benefit from those on the waiting list for social housing and that there should be an exemption for those who “temporarily have a smaller housing need due to a change in their circumstances, but whose need will predictably return to a higher level”.

The Lib Dems may yet use their manifesto to argue for the full abolition of the policy (as most party activists would wish), but they aren’t doing so tonight. Once again, by splitting the difference, they are in danger in pleasing no one.