Good news for the city mice out there – new research is claiming that people who live in bigger cities have larger social networks.

The study, carried out by researchers from MIT and the Santa Fe Institute, examined anonymised call information from the UK and Portugal to find out how many phone contacts (that is, “people you actually call”) phone owners had, and how often they communicated.

When they analysed the results, researchers found a “superlinear” link between city size and communication activity: as city size increases, residents’ total phone activity, and the total number of contacts they have between them, increase even more.

The diagram below compares the phone contacts of an average inhabitant of Lisbon (population 564,657) to that of a resident of Lixa (population 4,233). The Lisbonian has twice as many contacts. 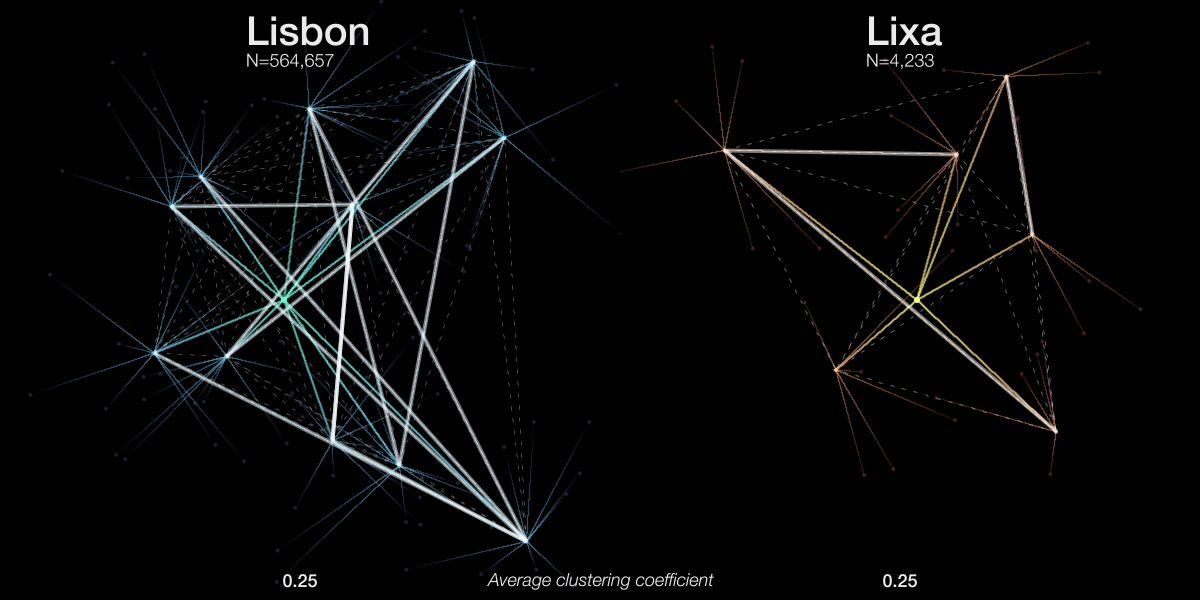 Oddly enough, the researchers also found that, despite a higher number of contacts in larger cities, the likelihood of your friends or acquaintances knowing one another remains pretty much the same. (That’s what “average clustering coefficient” at the bottom of the image refers to. Catchy.) Essentially, you’ll find similar types of networks in all sizes of city; it’s just that people in bigger cities tend to have larger ones. The researchers call this the “village” effect. Carlo Ratti, one of the paper’s authors, says:

It seems that even in large cities we tend to build a tightly-knit community, or ‘village,’ around ourselves…In a real village, connections might be defined by proximity, while in a large city we can elect a community based on affinity, interest, or sexual preference.”

This fits in nicely with the theory of “Urban Tribes”, put forward by US journalist Ethan Watters: in large cities where we lack family or local community, we create our own.

There is, however, a catch. Or rather, a network of catches.

For a start, the researchers analysed 7.6 billion calls from landlines (remember those?) in the UK, from a single month in 2005. While this included calls from landlines to mobiles, they didn’t include any mobile-only data, despite the fact that in 2005, around 85 per cent of UK households were using mobile phones.

In Portugal, they analysed mobile phone calls from a single phone network for fifteen months from 2006 to 2007. Yet in each city, the largest group (always at least 10 per cent of the phone users) had only one contact. Mobile users in Sabugal, the country’s least populated city, had a median of only 4 contacts, while in Lisbon, the largest, it was 11. Over fifteen months, that’s not that many – either people are a lot lonelier than we realised, or mobile usage doesn’t offer a comprehensive guide to someone’s social life.

But the research is at least indicative of an upwards trend in phone interactions as cities get larger. According to the study’s website, the researchers hope that their findings could “elucidate the role of cities as accelerators of human integrations”, and so shed light on the spread of other things in cities – crime or disease, for example.