In recent days, the Department for Communities and Local Government (DCLG) has released new statistics on council tax collection in England. Covering the period April 2013 to March 2014, it is the first official data which allows us to assess the impacts of the localisation of Council Tax Support (CTS). A headline finding was that while more than £1bn extra was collected, in-year arrears increased by £145m – up more than 20 per cent on the previous year. Using data collected by NPI for the Joseph Rowntree Foundation we have linked these outcomes to the CTS scheme introduced by each council. The findings do not bode well for the future of localised CTS.

From April 2013, local councils across England were given the power to devise their own systems of CTS for working-age adults. It replaced the national system of Council Tax Benefit (CTB) which ensured that the poorest households did not have to pay council tax. The change marked a historic move from a nationally devised system to one of 326 different local schemes in England. Alongside this restructuring, the money provided by central government to fund CTS was cut by 10%. Each council became responsible for devising its own scheme within the reduced budget. The majority of councils chose to pass the cut on to CTS recipients, with the introduction of a ‘minimum payment’, which requires everyone to pay at least some council tax regardless of income, being the most common approach to making up the funding shortfall.

“Hurdle after hurdle”: the Windrush scandal lives on, as a victim’s son faces deportation 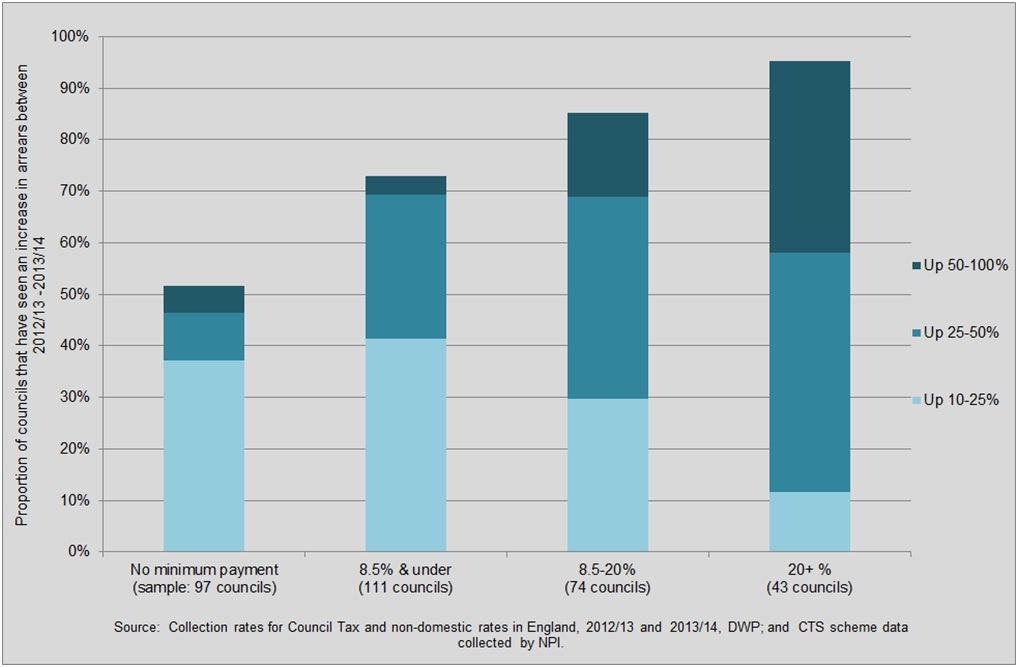 The pattern here is very clear. Councils who chose not to introduce a minimum payment saw a smaller increase in arrears than those who opted for a minimum payment. The larger the minimum payment, the worse the picture becomes. This worsening is seen in both the proportion suffering a rise in arrears (the overall height of each bar) and the average size of the rise (how dark each bar is).

In April 2014, many of the local schemes changed again: 56 councils increased the minimum payment from the year before and a further 15 included one in their scheme design for the first time. In terms of the graph, councils in England are moving to the right. These changes have seen the number of families having to pay council tax for the first time increase by 110,000 to 2.34m. The additional council tax paid compared to the former national system is also higher in the second year at £149, £10 more than in 2013/14.

While councils are collecting more council tax than a year ago, arrears are mounting. The further cuts to CTS made in April 2014, which are not reflected in this year’s data, are likely to see these figures worsen next year. Are we seeing the beginnings of a trend that mirrors that of the poll tax which resulted in growing arrears – and ultimately led to its abolition?