Every morning for the past seven months, TV drama screenwriter, author, and freelance journalist Peter Jukes has been waking up at 8am, checking his iPad and keyboard are charged, walking 15 minutes from his flat to the Old Bailey, logging on to Twitter, and live-tweeting everything he’s allowed to report from the phonehacking trial.

Before starting, the writer, who has contributed to the Daily Beast, Independent and New Statesman as well as writing copiously for BBC television and radio, only stops for a coffee at Starbucks and a nod to the defendants – including Rebekah and Charlie Brooks, and Andy Coulson – outside the door of the court. He then plunges into the minefield of reporting restrictions and risks of contempt of court while relaying the country’s most high-profile court case to the world.

Now, after around seven months, the jury’s finally out on the trial. I caught up with Jukes towards the end of his coverage – the day his keyboard had to be replaced it was so knackered – to find out exactly how, and why, he decided to report the trial this way.

As the afternoon sun blasts the obstinate grey brick and colonnades of the Old Bailey, I wait outside for Jukes to appear at the end of another day in court. But before my interviewee arrives, a gaggle of figures come into view at the entrance, through which passersby can usually only catch a glimpse of an airport-style security system.

Two of the trial’s seven defendants, Rebekah and Charlie Brooks, emerge from the building. One lurking cameraman bounces into action. They quickly leave in a cab, but not before the smattering of pedestrians wandering outside has caught sight of the former News of the World and Sun editor who has since featured so heavily on newspaper front pages, before ending up in court to answer charges of conspiracy to phone-hack, commit misconduct in public office and pervert the course of justice.

Jukes explains how so many months covering the phone-hacking trial have meant he is on first-name terms with the defendants. He wished Rebekah Brooks a happy birthday last month, she often says “hi” to him, former Downing Street communications director and ex-editor of News of the World Andy Coulson holds the door open for him, and he’s been lent an umbrella by Cheryl Carter, Brooks’s former assistant. He’s also on chatting terms with fellow journalists, lawyers and police from being such a regular presence at the courtroom, although he’s at pains to assure me that there is “nothing indiscreet” about their familiarity.

“You all rub together. . . It’s not like a family, but it’s people you spend seven months with. You get quite fond of them. You say ‘hi’ every day,” he relates, over a coffee in Starbucks, a two-minute stride from the courtroom that has become his world.

Yet Jukes points out that “getting up every morning and going to the Old Bailey – it’s not a nice environment. It’s kind of grim.

“I call it the Palace of Tears, because people are not in a very happy circumstance when they turn up there. Every day somebody’s crying, a relative, a defendant looking fearful, a witness looking fearful. It’s not a happy place.”

Jukes has written nearly half a million words, and his last count on his keyboard was 2.5m keystrokes. A database expert has been voluntarily amassing his tweets each night, and indexing them. He shows me his brand new keyboard; his battered old one didn’t quite survive the whole trial.

Have there been any physical implications for Jukes after all this tapping away?

“Slightly, slightly tired fingers when I stop tweeting, but I think playing guitar helps,” Jukes replies. “When I get home, I play guitar and it just relaxes them. People give me all kinds of advice – flick your fingers. In the early days they were a bit stiff, but no physical side-effects. The stress of it means probably my wine consumption went up, and I hate getting up early in the morning, which I’ve had to do, so that’s been the main physical toll.”

Excessive exposure to the trial has meant Jukes has dreamt about it, though. He recalls a dream he had the night before we meet: “I know a bit about dreaming and psychotherapy. I had a whole slow-wave sleep dream about Langdale QC’s defence of Andy Coulson, God knows why.” 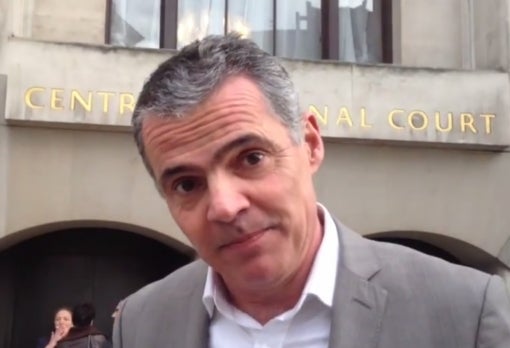 It’s not possible for Jukes to discuss much of the case’s content until the verdicts conclude the trial, for danger of being in contempt of court. But he can tell me his experience of covering it using such an unorthodox method.

Jukes describes his rather niche calling as “a complete accident”. He initially wanted to cover the opening of the trial potentially for additional material for his book, The Fall of the House of Murdoch

There were only 12 places available in the actual courtroom to the press – what Jukes calls “gold tickets” – and around 40 available to watch the trial from an annex. Jukes secured the last ticket to the latter. His initial series of tweets proved very popular.

“I had no idea you could live-tweet it. I had no idea I’d get all these followers… I only got in by the skin of my teeth because Nick Davies [Guardian special correspondent] told me you needed a ticket. So I applied and got the last ticket into the annex. None of this had been planned. I had no idea I’d be doing this for seven months.

So Jukes wrote a blog saying he’d missed a mortgage payment for the first time in his life, and couldn’t afford to cover the trial off his own back. He began a crowd-funding campaign via the site indiegogo and received about £20,000 in total.

He hasn’t made a profit, but the money has sustained Jukes’ coverage of the whole trial, though he admits “my living costs are too high, but that’s my problem!”

This April, his incessant tweeting won him the accolade of “Best UK reporter on social media”  from Press Gazette.

Jukes wants the collection of his tweets to be used as “a kind of book of evidence, so it’s timeline-able, the evidence, from the internal dates. . . It’s not just about breaking news, it’s an actual record, creating an open-sourced database, at some point.”

He is also going to release a tell-all book following the verdicts. It has the provisional title The Inside Story of the Hacking Trial and will include everything Jukes wasn’t allowed to report during the trial, his opinions and, “my story: a newbie, a minefield!” he laughs.

Jukes’ self-styled “newbie” status did cause some more traditional journalists to be sceptical about how long he could cover the trial without being in contempt of court, or breaking the specific reporting restrictions.

He’s made a few typos and occasionally had to delete a tweet along the way, but has managed to navigate the legal minefield of tweeting a trial remarkably well for someone with no court reporting experience.

“It’s kind of routine, tweets got mentioned [in court] every morning for the first six months, the defence would say ‘my lord, there’s been a tweet’, and you’d think ‘oh, God, who is it?’ It would put the fear of God in everybody.

“But from the Sun to the Times to the Guardian to the BBC to Reuters, I’m treading on their territory, taking away their work, but journalists, regardless of who they work for, have been lovely to me, very helpful.”

Having his tweets followed by the Attorney General, the police, politicians, the defendants themselves, and most national news desks must be an incredible pressure.

Jukes nods. “With power comes responsibility and you have to be really careful. The defendants are reading it; you don’t want to misrepresent their case. I don’t want to annoy them, antagonise the lawyers, but you just want to report the case.”

I ask him what the hairiest moment was for him (which he’s allowed to report). He recalls breaking the news of Brooks and Coulson’s affair, one of the trial’s most explosive stories:

“My fingers trembled when I was the first to tweet out the affair. I mean, crass, tabloid reasons, but [it was] quite germane to the case in terms of allegations of conspiracy. And I beat Nick Davies by 16 seconds. We all knew it was coming up but not when. That was the most exciting moment.”

And which tweet has caused the most excitement among his followers?

Jukes pauses. There have been a lot of tweets.

“One that went viral was just a little bit of evidence, a receipt from the News of the World to Glenn Mulcaire [private investigator]: ‘Milly Dowler – paid in full’. It’s quite upsetting, actually. Suddenly moments like that you realise, there’s this machine that is paying out money. I’ve never thought that emotional before, this is the first time ever, but that went viral. . . I noticed Alan Rusbridger [Guardian editor] retweeted that. . . It is chilling.”

Jukes puts his success as a live-tweeter in this context down to his independence. He has been described as a “citizen journalist” and even a “media pioneer”.

“The fact that I’m only letting down myself, only I’d get done for contempt, no news organisation, no newspaper editor, no brand, would be affected by my errors, gives me a freedom and speed of movement, which other journalists – who are brilliant live-tweeters – [may not have], obviously because in their heads [they’re asking], ‘Am I letting down the BBC?’, for example.”

The irony of his covering a trial involving an established newspaper giant, the Murdoch press, using such “new media” methods isn’t lost on him. He speaks out against old media bureaucracies, championing his decidedly leaner model.

“I’ve had 25 years of experience of various forms of the media, and my big step was to write about monopoly control of drama at the BBC, in 2009, and how it was ruining the quality. So I wasn’t a Murdoch-basher. . .

“I was interested in a kind of open market, free markets in culture. So when the Murdoch thing came out, this was another example like the BBC. . . There must be a better way than these huge, crumbling, old, industrial hierarchies, which are well-intentioned but there are so many layers between the decisions made and the ground that there must be a better way, and I think that’s part of the story of what went wrong at the News of the World – it was an industrial machine.”

Another criticism Jukes makes of the mainstream press is the prevalence of opinion amid news reporting. “Unlike the American system, we’re very comment-driven in our press journalism. We’ve mixed it up. The editorialising. To be a court reporter, where that’s completely forbidden, is very, very good for the soul.”

Yet Jukes, who is incredibly animated throughout our interview – perhaps with the jury’s verdict now finally in sight – is clearly itching to reveal his opinions and observations. The gossip and drama of a trial that has seen celebrity appearances and exposed an affair between two of its high-powered defendants will be worth watching for a while yet – whether it’s on the front pages or your Twitter feed. But in the meantime, as the jurors put their heads together, Jukes finally has the opportunity to rest his fingers.

Pre-order “The Inside Story of the Phone Hacking Trial” by Peter Jukes now at www.hackingtrial.com