This came through my door this week. 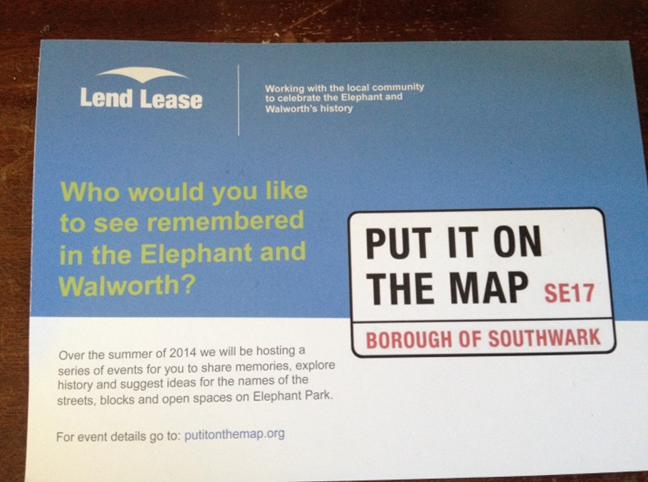 At first glance, a fairly innocuous looking postcard inviting us, as Elephant and Castle residents, to come and celebrate the area’s history and heritage, as well as suggesting ways for it to be memorialised around the widely-talked-about Elephant Park.

However, on closer inspection, a developer’s logo in the left hand corner tells a slightly different story. Rather than a local initiative, this is instead a scheme that has been hijacked by someone in their PR department, to boost local engagement by inviting suggestions for street and building names for the new £1.5bn development, and in turn offset any guilt at having uprooted thousands of former residents.

But at a time when the country is short on homes, and the ones we do have are getting increasingly more expensive and out of reach – just this week the national average house price leapt by 9.9 per cent to a new high of £260,000 – what actual, tangible good is this kind of naming ceremony to the community, particularly on the very site where affordable homes used to stand?

Heygate residents were forced out in their thousands to make way for this luxury development, so it might come as a surprise to many that the developers are now choosing to engage with the community in this way. Pascal Mittermaier, a Project Director for the Heygate development, is quoted on the campaign’s press release as saying: “Elephant and Castle is undergoing tremendous change and will soon be a global exemplar for the delivery of sustainable urban regeneration. It is important for us to preserve the rich culture and history of the area and to embody it in the new areas we create.”

The irony here is overwhelming. That a company who make a living out of demolishing the old and tired are then trying to engender nostalgia for the very same area is uncomfortably galling and a flawed brand of this so-called “regeneration”. They are in the process of annihilating any vestiges of the past on the site, and with the estate’s old buildings, hidden gardens and walkways having been torn down to make way for developers, they are purely appropriating people’s memories so they can furnish the new street signs and buildings.

The truth now is that this is an area that will only hold memories of the past, with any of the actual custodians of that past having been moved on to make way for their more affluent replacements. And this represents just another weapon in developers’ and local authorities’ arsenal: PR puff to distract from the toxicity of people losing their homes and being moved from their communities.

Schemes such as these, “engagement” and “consultation” exercises, help developers fulfil the commitments they’ve made to councils in return for real estate – without having to do very much at all for the community, least of all provide enough affordable homes for those that have been displaced.

This contributes to the wider problem affecting the housing market today, with less social tenancies available across the country as a whole. According to official figures, private renting has now overtaken social renting, with nearly 9.3 million private renters compared with 8.1 million social renters.  As a result, the waiting lists for social housing is at an all time high, with more than 1.8 million households in England waiting for a home – up 81 per cent since 1997.  These people wait in B&Bs, hostels and privately rented accommodation, which, with its accompanying short contracts and higher costs, is unsustainable and unsuitable for those families for whom life and income is already unpredictable.

Despite calls from homeless charity Shelter on the Government to act and tackle “out of control house prices by building more affordable homes”, developments such as the Heygate continue to be given the green light by local authorities, with, in this case, just 25 per cent of the 3,000 new homes reportedly being set aside for social tenants – compared to the 1,200 predominantly socially-rented ones that sat there before – granted on the often unfulfilled promises by developers that those who cannot afford the extortionate price tags will be catered for.

And how is this bitter pill forced down? By such “feel good” fliers as the one that landed on my doormat this week. With the company, in cahoots with Southwark Council, having erased a major part of the area’s history in its annexation of the Heygate – it is fortunate in a way that the fliers invite us to “Share memories and explore history”, because at the rate the demolition has been carried out, memories are all that those residents who once lived here will have.

This is the extent of the historical preservation that is going on here, both in Elephant and Castle, and elsewhere around the country where social housing is having to make way for privately owned homes. It is a nostalgia that cannot exist in the form of the thousands of former residents still being allowed to live in – or return to – these areas, but instead a cosmetic and shallow brand of nostalgia that is confined to the street signs, neatly parcelled memories that carry none of the nuisance, expense or space that actual people or old buildings would occupy.

This sanitised nostalgia is just a superficial sop to people who have lost homes and communities. At the risk of romanticising, a man leaning on his balcony on the estate, reminiscing about the area in the ’70s, could justifiably be considered the preservation of “the rich culture and history of the area”. But now that the balcony has been reduced to rubble and the man has been moved to the likes of Sidcup or Slough, what is left? A developer-sponsored road name, and that is no consolation for the loss at all.