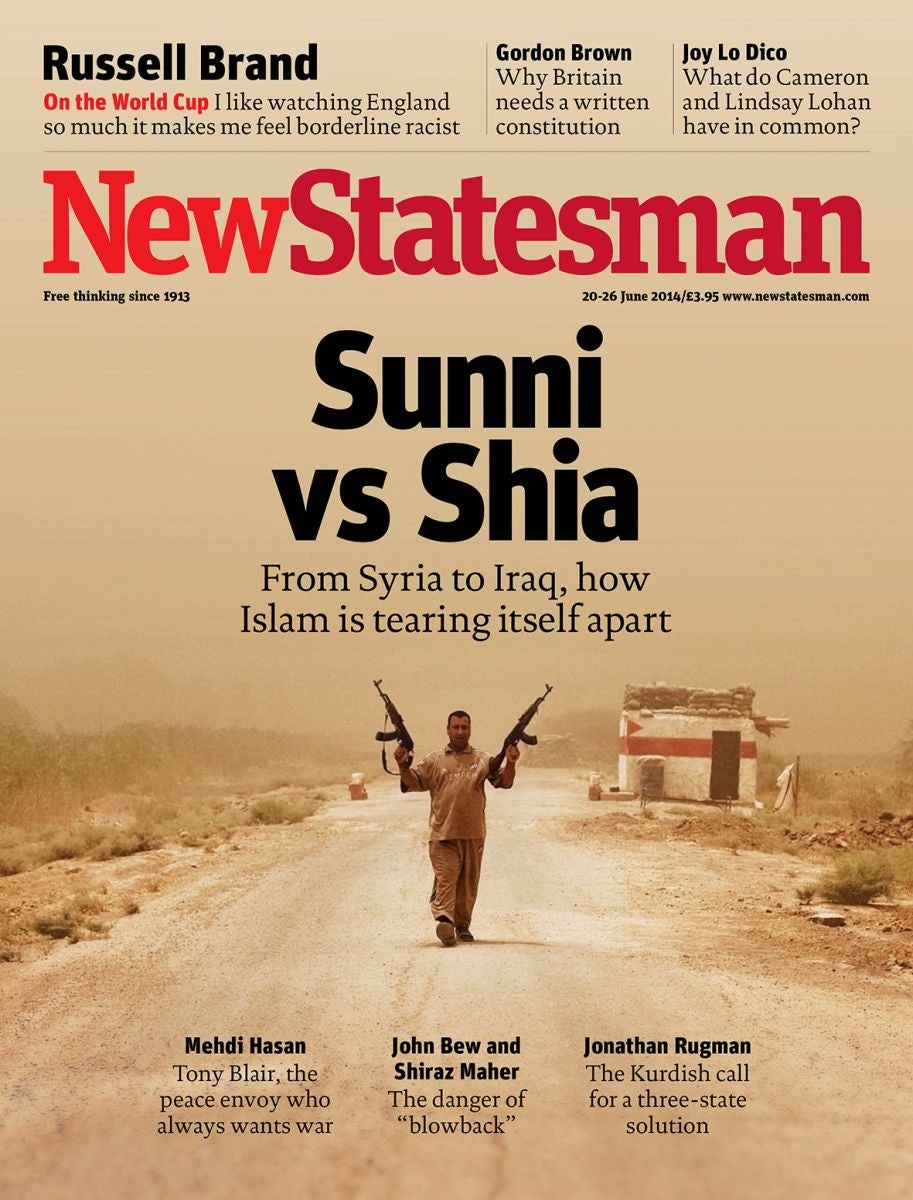 You are invited to read this free preview of the upcoming New Statesman, out on 19 June. To purchase the full magazine – with our signature mix of opinion, longreads and arts coverage, plus columns by Laurie Penny on gender, Will Self on pulled pork, and a special in-depth piece on Iraq by John Bew and Shiraz Maher – please visit our subscription page.

Those lucky Americans. On 20 January 2009, George W Bush boarded a helicopter and flew out of Washington, DC, never to be heard from again. Well, apart from that unreadable memoir in 2010. And, er, those rather odd self-portraits.

For Britons, however, Tony Blair never really went away. Month after month, year after year, he pops up on television, or appears in the newspapers, to promote an alliance with Putin’s Russia, or to defend Egypt’s military junta, or to push for military action against Iran/Syria/Iraq/fill-in-the-gap. He is the peace envoy who always wants war, the faith foundation boss who doesn’t understand the Islamic faith. Yet Blair, invader of Iraq, occupier of Afghanistan, defender of Israel’s 2006 blitz on Lebanon, is regularly and inexplicably invited by the British press to comment on all matters Middle Eastern. Why not ask Bernie Madoff to comment on financial regulation?

The power of one Russian diplomat’s example

In an era of dreary politicians, the silver-tongued Blair continues to beguile us. He is the Cristiano Ronaldo of politics: slick, skilful, über-confident and astonishingly arrogant. He may have converted to Catholicism but our former PM isn’t interested in confession. Blair doesn’t do remorse. As for an apology – you’re kidding, right?

Seven years after quitting Downing Street, “the Master” still retains an army of apologists, in the commentariat and inside the Labour Party. Rather than stage a humanitarian intervention of their own and persuade their hero to keep shtum, his supporters constantly rally around him, always ready to defend the indefensible.

When I interviewed the former culture secretary Tessa Jowell in February, for example, she called Blair’s backing of Egypt’s brutal generals “brave” and “counter-intuitive”. Meanwhile, in a recent BBC interview, the former home secretary Charles Clarke said that poor ol’ Tony was “in quite a tragic position” because he couldn’t return to British politics.

Even senior Labour figures who opposed the Iraq war, such as the shadow justice secretary, Sadiq Khan, can’t bring themselves to disown their former leader. I asked Khan how Blair could conceivably be in the running for the job of EU president, given his bloodstained past. “He won three elections,” he replied, urging me to look at the ex-PM’s wider, domestic record. What’s the metric? How many Sure Start centres cancel out the depleted uranium used in Fallujah? Which increase in the minimum wage excuses the kids killed by cluster bombs in Hilla? Why does record investment in the NHS absolve the torture and abuse in Abu Ghraib?

It cannot be said often enough: Blair’s misadventure in Mesopotamia was a moral, political and financial catastrophe, which led to hundreds of thousands of Iraqi deaths, millions of Iraqi refugees and billions of pounds squandered. Blair and Bush became recruiting sergeants for al-Qaeda: according to a 2007 study, the Iraq war “generated a stunning sevenfold increase in the yearly rate of fatal jihadist attacks”.

Our former PM now claims he “underestimated” the “depth and the complexity of the problem”. He can’t say he wasn’t warned. His holiday pal Hosni Mubarak of Egypt predicted that the invasion of Iraq would produce “100 Bin Ladens”, while his own joint intelligence committee told him the threat from al-Qaeda “would be heightened by military action against Iraq”.

In November 2002, four months before the invasion, three experts on Iraq were invited to brief the then PM in Downing Street. One of the three, George Joffe of Cambridge University, tells me how he outlined Iraq’s sectarian and tribal divisions and warned of the danger of postwar insurgency and civil conflict. Blair’s only response: “But the man’s evil, isn’t he?” Joffe was “staggered” to discover the prime minister was “completely uninterested in the complexities” of Iraqi society and displayed a “shallow mind”. In Blair’s head, says the Cambridge academic, the whole Iraq issue was “personalised” in the form of Saddam Hussein and: “It was clear that the decision had already been made . . . to invade.”

Then there is the “Bliar” brigade, which sees the ex-PM as a knowing and serial untruth-teller. “We were misled,” the former Labour cabinet minister Clare Short told the Iraq inquiry in February 2010. “On the one thing that he’s taken a stand . . . which was taking us to war, he didn’t even tell the truth about that,” the then Tory leader, Michael Howard, argued in April 2005.

Is he mad or bad? Deluded or dishonest? It no longer matters. Blair’s reputation lies in tatters. More than half of Brits believe their former prime minister was wrong to invade Iraq; one in five tell YouGov they think he should be tried as a war criminal. Blair can try to pretend he lives a normal life but when he goes to a book signing, people pelt him with eggs; when he goes out for dinner with his family, people try to arrest him. He doesn’t want our forgiveness – and nor will we give it to him.

“We have to liberate ourselves from the notion that ‘we’ have caused this,” wrote Blair on his website on 14 June, responding to the recent rise of the al-Qaeda offshoot Isis inside Iraq. “We haven’t.” For once, he’s right. “We” didn’t cause it. He did.

Mehdi Hasan is a contributing writer for the New Statesman and the political director of the Huffington Post UK, where this article is crossposted