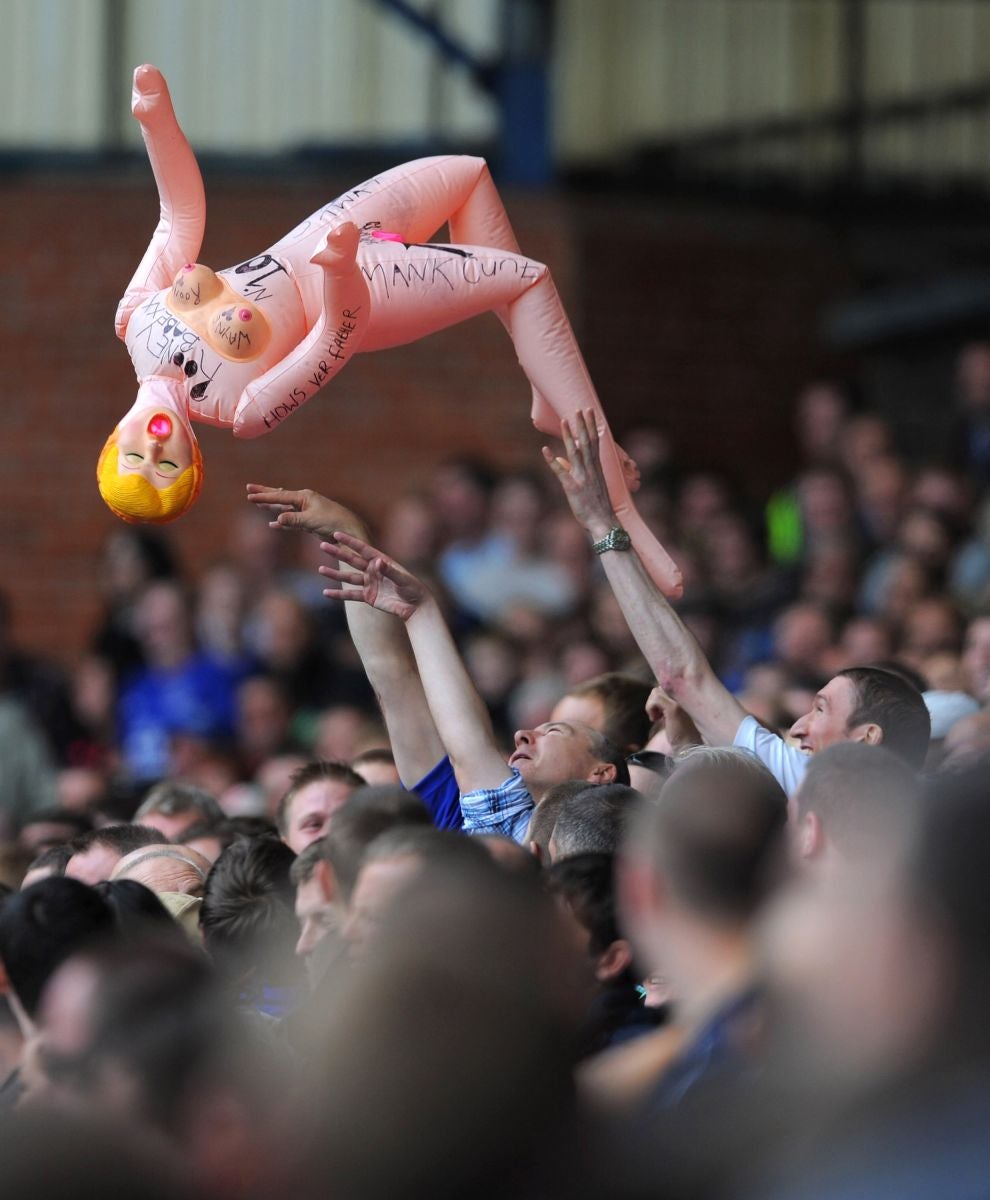 A blow-up doll is tossed around at a football match. Photo: Getty

When I read Margaret Atwood’s 1985 novel The Handmaid’s Tale, I identified Andrea Dworkin straight away. I hadn’t so much as cracked the spine on one of Dworkin’s works then – as a teenager in the 1990s, I grew up on the knowing bawdiness of Britpop and girl power, and I imbibed the understanding that the sex wars had been settled with Dworkin on the losing side, so I never read her. But I knew who she was and what she was supposed to stand for. The ecstatic feminists in Atwood’s novel who pile smutty magazines and stripper tat onto bonfires in the “Manhattan cleanup” – those figures, I knew directly, were were the anti-porn campaigners like Andrea Dworkin and her lawyer ally Catharine MacKinnon. The Handmaid who narrates the novel, now part of the breeder class in the theocratic reproductive dystopia those feminists inadvertently helped to establish, mordantly reproaches her long-deceased radical feminist mother for the unintended consequences of these politics: “You wanted a women’s culture? Well now there is one. It isn’t what you meant, but it exists. Be thankful for small mercies.”

In the generational model of feminism, where each wave must swallow the one before like a swarm of tiny cannibal spiders devouring the maternal body, Dworkin is that dismaying mother. She is despised by liberal feminists for her strategic alliances with conservative politicians in the service of her anti-pornography agenda. She is despised too by anti-censorship campaigners and, inevitably, by pornographers and misogynists. Dworkin has been thoroughly monstered, the specifics of her work and life demolished and replaced by a vague, hulking malevolence. So when I did finally read Intercourse (published 1987), I didn’t recognise Dworkin at all – because the Dworkin of the writing is not the cold and closed figure of liberal myth whose massive shadow squats in judgement over all our pleasures. The Dworkin of the writing is furiously, transfixingly alive – and her life was, even by the dramatic standards of the second wave, profound in suffering, adventure and love.

She was born in 1946, the daughter of two Jewish immigrants in New Jersey, and was politically engaged from a very young age. She was also victimised: as a child she was sexually abused, then as a young woman she was sexually assaulted by police after being arrested on an anti war protest. She travelled to Europe, entered prostitution, married a violent man, escaped back to America. She was a lifelong political lesbian – and she married another man in 1995, gay rights campaigner John Stoltenberg. This surprising arrangement was, by all accounts, the tenderest of unions, the two of them both intellectual comrades and equal partners in affection. Intercourse is a book of all these parts: uncompromising, angry, ragingly intelligent, warm, and driven by an absolute conviction that women must be freed from their inferiority. And that freedom can only come from a fundamental reinvention of what we mean by human, because as long as civilisation has existed, the category “human” has been defined so as to make women insecure within it. Summarising the position of western philosophy, Dworkin identifies the foundational belief of patriarchal culture: “A human being has a body; and when it is violated, it is abused. A woman has a body that is penetrated in intercourse: permeable, its corporeal solidness a lie.”

But the book opens, not with terse polemic, but with meticulous, intimate and unsparing readings of works by Tolstoy, Tennessee Williams and James Baldwin. This is itself surprising, but even more surprising is the attitude Dworkin takes to these writers. She does not prostrate herself before their greatness, nor does she treat them as idols to be smashed. Instead, she appoints herself the equal of both the works and the men, and in them she finds disturbing insights into the way patriarchy distorts the act of sex into an act of violence by which men assert their possession of women. “As long as men desire women for sexual intercourse, and women are used as sexual objects, regardless of laws and other public reforms, women’s real status will be degraded,” concludes Dworkin in her chapter on Tolstoy. Though she rarely flinched from using the state to achieve her political aims, her ultimate aim is always a transformation of the most intimate conditions.

As a work of literary criticism, Intercourse is vital. But Dworkin is not really interested in reading novels: instead, the project of Intercourse is the reading of “the fuck”, as she bluntly calls it. Dworkin is frequently caricatured as being anti-sex – she never said “all sex is rape” but it’s the statement most commonly ascribed to her. What Dworkin actually attacks in Intercourse is the use of heterosexual sex as a method of terror. What she asks is whether sex under patriarchy can ever be anything else. However, the mischaracterisation of her is illuminating because it confirms something that Dworkin herself observes: so naturalised is the belief that possession is inherent to sex, so total the eroticising of male power and female vulnerability, that even to imagine sex on equal terms is to be deemed an enemy of sex. “Critiques of rape, pornography, and prostitution are ‘sex negative’ without qualification or examination, perhaps because so many men use these ignoble modes of access and domination to get laid, and without them the number of fucks would so significantly decrease that men might be nearly chaste,” she writes. And where this sexual domination intersects with racism, as Dworkin explores in the chapter Dirt/Death, the brutality multiplies.

Intercourse is a work in search of a way to free human sexuality from this cruelty – an especially intractable entanglement, because not only does sex take place within the patriarchal coding of men as superior and women as inferior, but furthermore, the individuals participating in the fuck understand it to reaffirm that structure whenever it takes place. When women are not seen as human, intercourse enforces their status as objects:

“In other words, men possess women when men fuck women because both experience the man being male. This is the stunning logic of male supremacy. In this view, which is the predominant one, maleness is aggressive and violent; and so fucking, in which both the man and the woman experience /maleness/, essentially demands the disappearance of the woman as an individual; thus, in being fucked, she is possessed: ceases to exist as a discrete individual: is taken over.”

Dworkin is absolutely clear that a world in which rape and prostitution exist is one in which it would be delusional for women to mistake sex for liberation. Some radical feminists have taken from Dworkin’s analysis the belief that sex under patriarchy is always a form of submission, and must be resisted as such, and Dworkin sometimes seems to believe this too: “How to separate the act of intercourse from the social reality of male power is not clear,” she says. But she also offers hopefulness for sex, and even more importantly, hopefulness within it. In her reading of James Baldwin in particular, she identifies the possibility of sex in which each party recognises the other as fully human and, rather than dominating the other, makes himself vulnerable (the sex in Baldwin is sex between men) to the peril of being known by another: “fucking can be a communion, a sharing, mutual possession of an enormous mystery.” It is an ideal of sex as something not “taken” from another but shared with them, a moment of contact through which both parties can be changed.

This is not some conservative call for the sanctity of monogamy. Instead, sex is sanctified as a moral exchange between two who may be partners or may be strangers, but who must recognise both each other and themselves as equal in humanity, and equally liable to be transformed through their intimacy. As the epigraph from Yeats has it, “All changed, changed utterly:/A terrible beauty is born.” And ultimately, the most radical part of Intercourse is Dworkin’s belief that change is possible, even if most people are reluctant to acknowledge it: “We refuse to recognise out possibilities because we refuse to honour the potential humans have, including human women, to make choices. Men too make choices. When will they choose not to despise us?” Right now, the answer to that question appears to be “not any time soon”. In the excellent introduction to the 2006 edition, Ariel Levy (author of Female Chauvinist Pigs) points out ruefully that “with the possible exception of the Shakers, it is difficult to think of any American movement that has failed more spectacularly than antipornography feminism.”

And as Levy points out, it was a costly failure. The fissure between the crudely named “sex positive” and “sex negative” factions of feminism remains raw and vituperative, while the triumph of raunch culture makes the prospect of a world without pornography laughably unlikely. Even an hour without pornography would be a big ask when female objectification is the principle visual mode of our culture. Dworkin hoped that her work would eventually become a museum piece – like the testament of the Handmaid in the epilogue of Atwood’s novel, where it’s discovered in a future time of sexual equality and treated by scholars as the arcane product of an incomprehensible civilisation. In some ways, Intercourse does feel like a relic, but not because its author’s hopes have been realised. Rape, prostitution and pornography continue. What appears quaint is Dworkin’s faith that these could ever be dismantled – the tendency now is increasingly to believe that humans are as we are, and all we can hope for is the amelioration of our worst habits.

Even before she died (at the absurdly early age of 58), feminists seemed keen to tidy Dworkin away. She was troublesome and unruly, in appearance as well as rhetoric. She has been accused of setting feminism back, and of making it unappealingly confrontational. But from where I stand now, it seems to me that it isn’t Dworkin who failed feminism, but us who failed her. Her analysis is clear and essential, and though it was rejected, it has never been comprehensively answered. Feminists need to regain the radicalism of Intercourse. Even if you believe that prostitution and pornography are fundamentally acceptable, the challenge of Dworkin is to explain why they should exist – rather than merely accepting their current existence as an argument for their continuation. We are creatures of culture and Intercourse is the promise that we are not doomed to the endless replication of misogyny, but can reinvent that culture in new and better shapes. Intercourse the book is a paradigm of intercourse the act as Dworkin wishes it to be: an encounter between equals (Dworkin and her sources) that creates new states and possibilities in both. “Habits of deference can be broken,” writes Dworkin, “and it is up to writers to break them. Submission can be refused; and I refuse it.”

This essay is part of the New Statesman’s “Rereading the Second Wave” series. Read the other essays here. You can read Andrea Dworkin’s account of her rape here.