The urban design trend in the major cities of the world is for the reclamation of disused infrastructure, for conversion into something more civic-minded. The progenitor is the High Line, New York City’s newest park, lovingly-cultivated along the length of a disused elevated freight line along the western edge of Manhattan. It’s very nice – not revolutionary, but certainly revelatory.

For planners in London looking to do the same thing, the best option would probably have been the Kingsland Viaduct if it hadn’t been repurposed for the London Overground’s extended Dalston-to-New Cross East London Line in 2010 (and a damn good thing too, how it’s already in need of capacity improvements to cope with passenger demand). No, Londoners will have to make do with the much-fêted Thomas Heatherwick-designed pedestrian Garden Bridge, which, if it gets planning permission and funding, will cross the Thames from Temple to the South Bank. Maybe, though, that’s skipping over and ignoring and under-used resource that’s been in front of planners the entire time – the Thames.

Late last year, the Architecture Foundation put out a call for entries to a series called “London As It Could Be Now”, searching for “new ideas and visions for self-selected sites along the Tidal Thames reflecting on relevant changing social, economic, cultural and environmental conditions and concerns”. That means things like bridges, airports, houses – the usual. But one of the entries, which was revealed in November but which I’ve only just come across, is Thames Baths, by Studio Octopi. It’s a cute public pool constructed on the Thames, at the site of where Blackfriars Pier (one of TfL’s water taxi stops) is:

Swimming has always featured in the River Thames. The ability to do so has become harder and harder as river traffic has increased and London’s population has outgrown the ageing sewage system. However plans are in place to upgrade Sir Joseph Bazelgette’s sewers and therefore dramatically improve the quality of the river’s water. The Thames Baths Project is about imagining the possibilities of safely swimming in the river and opening up a discussion about the future.”

It’s interesting that they mention sewers, as the River Fleet – once effectively an open sewer, now an enclosed sewer – empties out into the Thames beneath Blackfriars Bridge, mere yards away from the pier. That’s not something you want to have to find yourself swimming in when the tide switches direction and brings it back upstream.

Still, it’s a nice idea, and the kind of thing that would allow London to express itself architecturally without nicking good ideas from New York City. Semi-wild swimming is a very London thing – see: Hampstead Heath ponds, clubs taking dips in the Serpentine, the use of Shadwell Basin as an outdoor watersports centre – and it would be fantastic if it was a genuinely public space, as the trend in the capital is for the privatisation of new public amenities like squares or parks.

It can also be seen as a less-ambitious version of the LidoLine, a 2012 proposal by Y/N Studio to convert the mostly-disused Regent’s Canal, which runs from Islington to the Thames via east London: 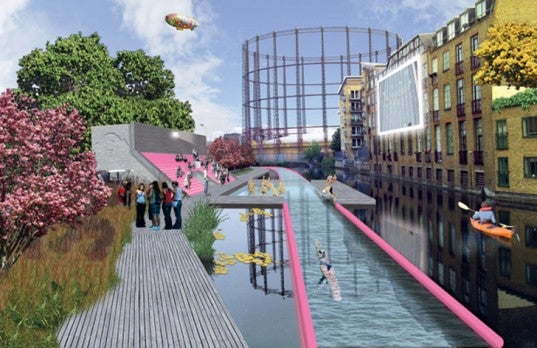 It was pitched as an alternative route for commuters, but since the canal kind of skirts around the edges of central London (where people tend to work) it might be better-suited for leisure time. However, the difficulty of keeping rat faeces and shopping trolleys out of the water – seriously, it’s big problem in the canal for anyone who happens to try swimming in it at the moment – make it unlikely. Alas.