Prior to April 2013, as part of the social safety net, anyone entitled to a cash benefit automatically received a 100 per cent discount on their council tax. In April last year, that changed. In both Wales and Scotland, the former system was maintained with the support of their governments. But English local authorities had to choose. They could continue as before (but with reduced central government funding) or they could introduce their own system. This April, many of those local schemes changed again. Our report, published last week, showed that three quarters (244) of the 326 English local authorities that collect council tax have now adopted schemes that required working-age households to make a minimum council tax payment regardless of income.

In that report, we estimated the average amount of council tax to be paid in 2014/15 was £149 over the year (£2.85 per week) for those households who previously would have had to pay nothing. For those out of work, as most of these households are, this money has to be found from the cash benefit. As a result, the value of the safety net has been reduced, but by a different amount depending on the local authority.

Individual councils have made decisions on the basis of their own finances and tax revenues. Yet these decisions have started to alter the bedrock of a national system, meaning a previously England-wide safety net is now worth different amounts in different places.

For people reliant on means-tested benefits, £2.85 is the sort of sum that matters. And £2.85 is only an average. Here, for example, are just ten of the (more than 60) local authorities where the average minimum payment for workless singles is estimated to exceed £3.60 a week: Blackpool, York, Stoke, Peterborough, Chelmsford, Haringey, Hillingdon, Bath, Torbay, Cornwall. For singles with no dependent children, that has to be found out £72.40 a week. Losing £3.60 is a 5 per cent cut in living standards. Since the value of these cash benefits hasn’t changed other than to keep up with inflation since the late 1970s, local discretion in the last 53 weeks has altered the value of the safety net by a bigger amount than all prime ministers from Thatcher to Brown succeeded in doing.

When the Thatcher government sought to replace domestic “rates” with a Community Charge at the end of the 1980s, it was pushing two principles. One was that the tax should be a flat rate per person (hence a poll tax). The other was that every adult should pay something, however low their income. That “something” was 20 per cent of a person’s normal community charge liability.

Council tax, based on property value, swept away the first principle. Council tax benefit, providing a 100 per cent discount to those getting cash benefits, swept away the second. Twenty years on, the localisation of council tax support has reversed this. With 244 councils opting for some minimum payment, the second poll tax principle clearly now enjoys consensus support. But how far do the decisions about the size of the minimum payment reflect the political party in control?

The graph below (based on a separate analysis) provides the answer. The 326 English councils are grouped according to whether they are Conservative, Labour, Lib Dem or NOC/Independent controlled. Within each group, councils are classified according to the size of the minimum payment, from zero at one end to above 20 per cent at the other; 8.5 per cent is in this list because it was the maximum a council could set last year and still be eligible for central government’s transitional grant. 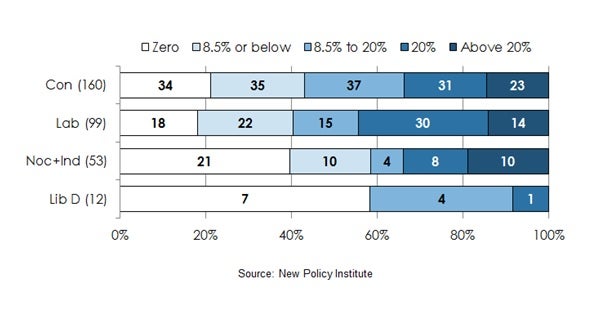 It is clear from the graph that the few Lib Dem councils all have minimum payments at the lower end while NOC/Independent are clustered at both the low and the high ends. But the spread of minimum payments for Labour and Tory councils are remarkably similar. It’s particularly striking how many have chosen a minimum payment at least equal to the poll tax of 20 per cent. Does this mean, then, that the safety net is no longer in safe hands whichever party is in power?

Peter Kenway is director of the New Policy Institute