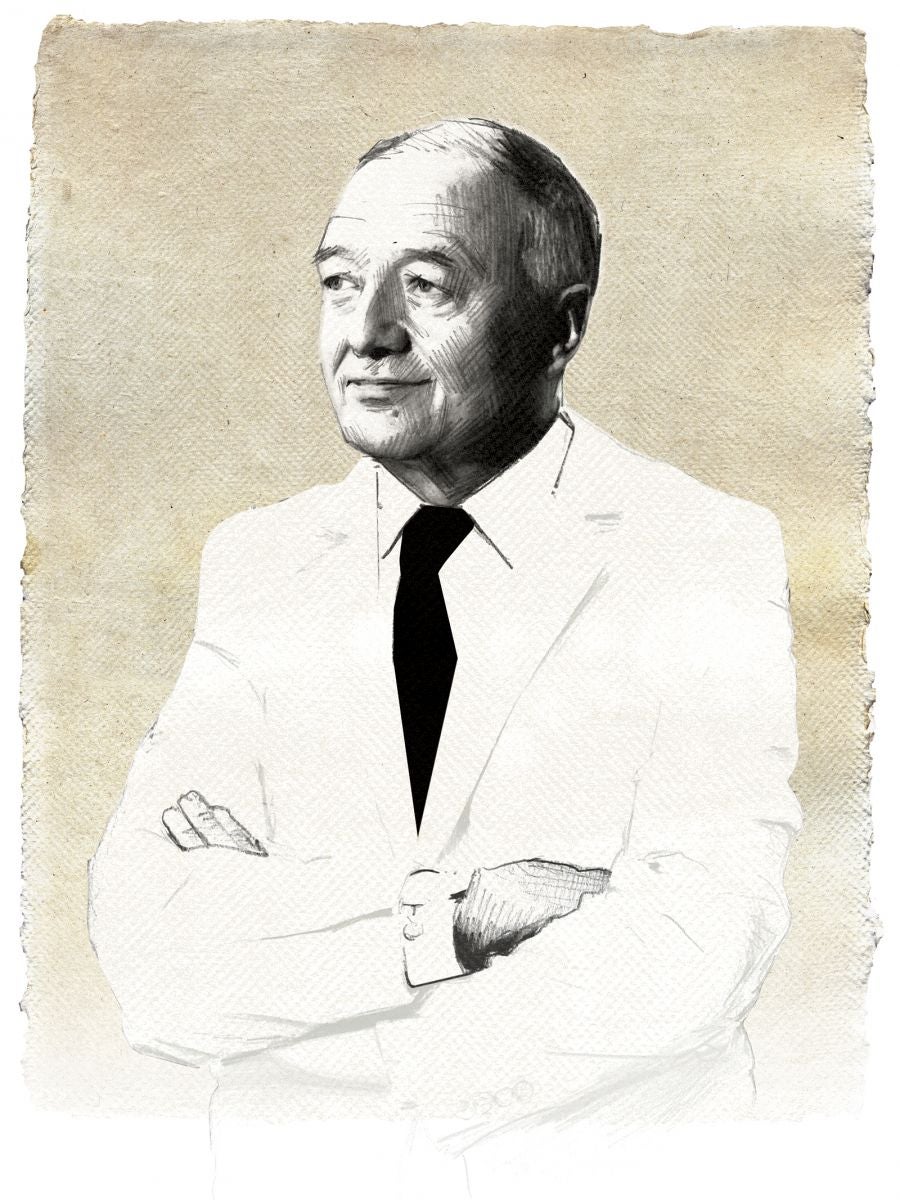 After transforming London, Ken Livingstone has taken up the more leisurely task of transforming his garden. “I’ve finally got rid of all the weeds,” he says proudly, standing in the kitchen of his terraced home in Cricklewood, north-west London. Green Ken, as I am minded to rename him, later takes me on a tour of his favourite trees, including a King James I mulberry and a Wollemi pine, a species presumed extinct until 1994 (“It was like an archaeologist discovering a live T-Rex!”), as well as the pond that hosts his beloved newts and frogs.

Almost two years to the day since his defeat to Boris Johnson in the 2012 London mayoral election, and six years since he left City Hall, Livingstone is in ebullient form. “I’m so healthy!” the 68-year-old exclaims. “My doctor is amazed. My heart rate is low; I’m a stone lighter than I was in office.” Married to his former office manager Emma Beal – they have two children, Thomas (11) and Mia (ten) – he seems at peace with nature and himself. “But I’d still prefer to be running things,” he confesses.

Livingstone is confident, however, that the next government will be to his liking. He predicts that Labour will win the 2015 general election and begins our conversation with a paean of praise to Ed Miliband. “I’ve had to deal with every Labour leader since Wilson and there are only two I would trust with my life in their hands, and that’s John Smith and Ed Miliband.

“When you actually look at every other Labour leader – and even Alex Salmond – they spend all their time courting Murdoch, and for a politician to stand up to Murdoch is a clear indication of strength of character, given what he might incur. He overrode all the weak-hearted around him on the energy-price freeze.

“And in saying no to the Syrian adventure . . . you’ve got to go back to 1956 for an opposition leader, or a Labour leader, to oppose that sort of foreign intervention. Those are all good signs.”

He adds: “I spent quite a lot of time with him in the first few years of his leadership because I was the candidate for mayor, and I was very impressed. He really didn’t give a sod about the personality side of politics; he was always just focused on where he wanted to take the country.”

The man whom the conservative jour­nalist Charles Moore memorably described as “the only truly successful left-wing British politician of modern times” suggests that Miliband could be a transformative prime minister to rank alongside Attlee and Thatcher. “Ed Miliband has a real chance to completely reset the agenda and create a much more fair, social-democratic society, rebalance the economy, narrow the wealth gap. And if you can do that in one term, as Attlee did, you do make it very difficult for the Tories to reverse it. Just as Blair felt he couldn’t reverse Thatcherism – he had to build on it.”

Livingstone’s only concern is that “there are still too many nervous nellies, holdovers from the New Labour era, who are saying: ‘Be more cautious, don’t be too bold.’ ”

Whom does he have in mind? “Well, I only know what I read in the papers, and it’s always anonymous, isn’t it? But Mandelson occasionally whines; there’s [Alan] Milburn, Austin Mitchell. I have to say, if you’ve got Mandelson complaining, you’re mostly on the right track.

“When me and Oona [King] were contesting the Labour nomination [for mayor] in 2010, she got endorsed by Mandelson and I thought, ‘You’re really trying to sink her.’ Short of being endorsed by some serial killer, there’s not much worse, is there?”

But while he believes Miliband can win on a policy platform significantly to the left of New Labour, he also warns that the party has “lost the argument about debt” and that “there’s no point in trying to win it now”. Instead, in a reminder that he has always been part wonk and part populist, he urges Labour to fund higher infrastructure spending through a new dose of quantitative easing.

“It’s quite easy for Labour to construct an entire five-year programme without an additional penny of borrowing. The Bank of England has created £375bn to prop up the financial system, and it was right to do so . . . So, equally, you could create £375bn for infrastructure.”

Livingstone suggests that another round of QE could fund a mass housebuilding programme, HS2, Crossrail 2 and the expansion of broadband. “You’d create well over a million jobs, put people back to work, get the benefits bill down; and there wouldn’t be a penny of debt because all assets are held by the Bank.” He warns, however, that “Labour would need to win the election with a clear commitment, because my guess would be that the Bank of England, while quite happy to create billions to save the financial system, wouldn’t be so interested in building homes for rent.”

His other major policy proposal is to replace corporation tax with a levy on company turnover. “The tax burden has become so unfair. You don’t actually need to increase taxes on ordinary people at all; you just need to make sure that the corporate sector pays its tax. They can’t avoid a turnover tax any more than they can avoid business rates. The mere threat of doing it might mean they start to fess up and pay some tax.”

Has he put his ideas to Miliband? “I drone on about using quantitative easing for infrastructure and chasing the tax dodgers at every NEC meeting [he is an elected member of Labour’s national executive] and economic group summit . . . I raise them all the time. We’ll see what they eventually come out with. No one ever rejects it.”

On the day we meet, the media are transfixed by the question of whether Boris Johnson should or should not run for parliament in 2015, and Livingstone is scornful of his successor’s divided attention. “Except perhaps for the first year when he was mayor, which was pretty chaotic, everything else he’s done since has just been focused on that [becoming Conservative leader].”

The biggest mistake he made about his Tory opponent for mayor, Livingstone says, was assuming that he had a grand plan to tilt London to the right. “On the weekend he announced that he was going to run, myself and all my key advisers read ten years of [his] Telegraph and Spectator articles. The following Monday we just said, ‘My God, this is the most hardline right-wing ideologue since Thatcher.’

“My sense was that as soon as he’d won the election, he’d completely recast City Hall and set a whole new agenda. But he hasn’t really done anything. He’s stopped all projects that weren’t committed except the bike scheme.

“Except for the cable car to nowhere, he hasn’t initiated any new projects. He hasn’t set a right-wing agenda.

“Those right-wing Tories who think he’s going to be the answer will be acutely disappointed. If he did ever become prime minister, the country would just drift. For Boris, it’s just about being there, not what you do with it.”

Livingstone relishes the opportunity to reveal some uncomfortable tales about his old foe. “What I find interesting is that almost all the dirt I get on Boris comes from the Tory members on the [London] Assembly. They’re really angry because he’s decided he’s going to start working from home on Fridays.”

I later recall how (wonderful irony) it was Johnson who attacked ministers’ advice to Londoners to stay away from their workplaces during the 2012 Olympics (in order to reduce transport congestion) as a “skiver’s paradise”, declaring: “Some people will see the Games as an opportunity to work from home, in inverted commas. We all know that is basically sitting wondering whether to go down to the fridge to hack off that bit of cheese before checking your emails again. I don’t want to see too many of us doing that.”

Livingstone continues: “The Telegraph had a picture of him standing in front of his desk after his fifth anniversary of being mayor. My shock was that he hadn’t moved a single thing. The desk was exactly as I left it the day I walked out; he hadn’t even moved the pot I kept my pens and pencils in. Everything was the same. It just suggested to me that, while Boris blusters in, it’s the minions who are keeping things ticking over. The deputies won’t set a new agenda, that’s the mayor’s job. If the mayor won’t do it, nothing happens.”

A symptom of this listlessness is Johnson’s dismal record on housing. “After I lost the last election, Boris phoned me to say he’d like me to be his guest at the opening of the Olympic Games because it would be very bad if I wasn’t there, so I said, ‘That’s fine. Can I just try and explain something to you? We’ve got this real housing crisis: you need to start building homes for rent.’ And he said, ‘Homes for rent?’ and the shock in his voice was like I’d asked if I could sleep with his wife.

“You just realise, for this sort of leader running the Tory party, they don’t have a struggle paying rent: they reach a certain age, their parents give them a house, or they inherit one. They have no understanding of what it’s like.” His advice to Labour, which he believes will face Johnson as leader of the opposition before long, is “not to make the mistake of assuming they’re dealing with a hardline right-wing ideologue”. Rather, “they must concentrate on the fact they’re dealing with a fairly lazy tosser who just wants to be there”.

In two years’ time, London will elect a successor to Boris. Whom would he like Labour to put forward?

“I know of ten people thinking of running for the Labour nomination and all of them are people who’ve been my friends,” he says, “some of them, like Tessa [Jowell], going back 40 years. So I’m going to keep completely out of it.

“There is no one seeking the Labour nomination who I think shouldn’t get it, and if I endorse any one candidate and Labour selects somebody else, it’ll be, ‘Oh, Ken didn’t support me.’ ”

For once, the man whose autobiography is titled You Can’t Say That decides “I’m going to keep my gob shut”.