Over the weekend, pro-Russian protesters rioted in the eastern Ukrainian cities of Donetsk, Luhansk, and Kharkov. They took over government buildings and arms caches, waving Russian flags and chanting things like “Novorossiya” (“New Russia”). Their aim: to declare independence from Ukraine and, perhaps, become federal provinces (oblasts) of Russia. Early on Monday, separatists in Donetsk declared the creation of the “Donetsk People’s Republic” and set a referendum date for 11 May. “If we’re impeded in holding a referendum, we will turn to Russia and ask them to move in their troops,” one separatist said.

The Tory “attack on nature” will undermine UK security

The protests are almost certainly Kremlin-backed, part of Russia’s longstanding plan to “federalise” Ukraine, and to reassert control over the territory that used to be called Novorossiya. “The events in Donetsk, Luhansk and Kharkiv are coordinated from the same center,” the Kyiv Post reports. Crowds are singing the Russian national anthem in streets of eastern Ukraine; some call themselves the “anti-Maidan,” advocating for the creation of “the spiritually patriotic union“ of Novorossiya. The Twitter account @NOVORUSSIA2014 gained thousands of followers over the weekend, and #RussianSpring and #AntiMaidan are trending.

Novorossiya is the name of the formerly Ottoman territory that Catherine the Great conquered in the Russo-Turkish Wars, which is now much of southern and eastern Ukraine. Led by Prince Grigory Potemkin, Russian forces colonised the land in the late 18th century and established the cities of Sevastopol, Simferopol, Tiraspol, and Odessa. 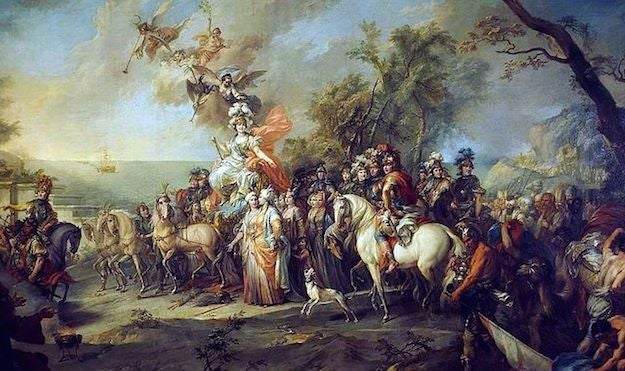 The area became part of the Ukrainian Soviet Socialist Republic, and the term “Novorossiya” resurfaced after the Soviet Union fell in 1991. In 1994, Transnistria, the breakaway state between Moldova and Ukraine, declared that it was “an inalienable part of the Russian state’s southern region, [which] also includes Crimea, Odessa oblast, and a number of other [Ukrainian] oblasts, [and is] known as Novorossiya.” When it looked like NATO might expand to include Ukraine in 2003, “some not entirely academic quarters in Moscow played with the idea of a major geopolitical redesign of the northern Black Sea area, under which southern Ukraine, from the Crimea to Odessa, would secede from Kiev and form a Moscow-friendly buffer state, ‘Novorossiya’ – New Russia,” writes Dmitry Trenin, director of the Carnegie Moscow Centre. Now, the swathe of land spanning from Transnistria to Donetsk is increasingly referred to by that name.

If the Kremlin isn’t after re-establishing Novorossiya, it’s certainly looking to create something like it – and the first step in that direction is federalising Ukraine. In an interview last week, Russian Foreign Minister Sergey Lavrov said that federalisation is the only “absolutely correct way” to proceed, and that it’s “what the eastern and southern regions request.” If the Kremlin has its way, Ukraine might either become a federation of regional governments, each with wide-ranging authority to act virtually autonomously, or the “independent” southern and eastern regions would become Russian oblasts. “Federalisation would give some pro-Russian regions in Ukraine the de facto right to block crucial decisions, including future moves toward integration with the EU. . . Moscow is likely to find it easier to manage Ukraine and to increase Kyiv’s dependency on its eastern neighbor,” Ukraine scholar Wojciech Konończuk writes.

The Kremlin has tried to federalise a handful of former Soviet republics. In the early 2000s, Putin proposed that Belarus should become part of Russia in the form of six oblasts (Belarus rejected the offer) and put forward a similar plan for Moldova, Marcel Van Herpen explains in Putin’s Wars. In Ukraine, the prospect of federalisation emerged during the 2004 Orange Revolution when former President Viktor Yanukovych proposed a referendum on the matter. He pursued federalisation again in 2010, but it was tabled again after Yanukovych’s pro-Russia Party of Regions deemed it “too expensive and problematic.”

Today, only 14 per cent of Ukrainians support federalisation, according to a recent poll. As the Washington Post points out, the idea is more popular in the southern and eastern regions, where 22 per cent and 26 per cent, respectively, support the creation of a federal state, compared to 3 per cent in the west. But if the Kremlin-backed separatists continue this weekend’s provocations, federalisation could actually happen, especially given the extent to which the Ukrainian government was caught off-guard by the Donetsk declaration.

“Frankly speaking, we do not see any other ways for sustainable development of the Ukrainian state other than a federal state,” Lavrov said last week. “Maybe, some people know better and some magic formula can be found within a unitarian state. However, when the west, the east and the south celebrate different holidays, honour different heroes, have different economies, speak different languages, think differently and are attracted by the culture of different European civilisations, it is very hard to live in a unitary state in such conditions.”