On the morning of 22 January 2013 a story started to develop on Twitter about the imminent and unexpected resignation of Jens Weidmann, the CEO of Deutsche Bundesbank.

The first documented tweet came at 10.02am and was traced back to an anonymous blog profile called “Russian Market”, which currently has just over 23,000 followers.

In 25 minutes the information had been exposed 256,634 times and by 10.20am the euro had fallen from 1,3340 to 1,3267 against the US dollar, dropping 0.55% in value. Decimal movements like these may seem insignificant but given the heavy gearing of the international currency markets, vast amounts of money can be made on micro movements if you can control the fluctuations and have this information prior to all other investors.

The rumour was not only tweeted and re-tweeted by wild market desperados and self-appointed experts but also by more established parties in the business. Stock traders at banks and finance editors at established newspapers ran with it too.

When a spokesman from the Deutsche Bundesbank issued an official denial of the rumour, which hit Twitter at 10:20am via the Dow Jones/Wall Street Journal, it was with the rather strong wording “komplette blödsinn”, meaning “utter garbage”. In just seven minutes, the official denial of Weidmann’s resignation had been shared 344,863 times on Twitter and in the meantime the euro had pretty much re-stabilised to the same value it had before the rumour mill went into overdrive.

The Weidmann case is not isolated. Social media platforms have more than once been used as vehicles for spreading junk evidence that has excited the markets in unfortunate ways. 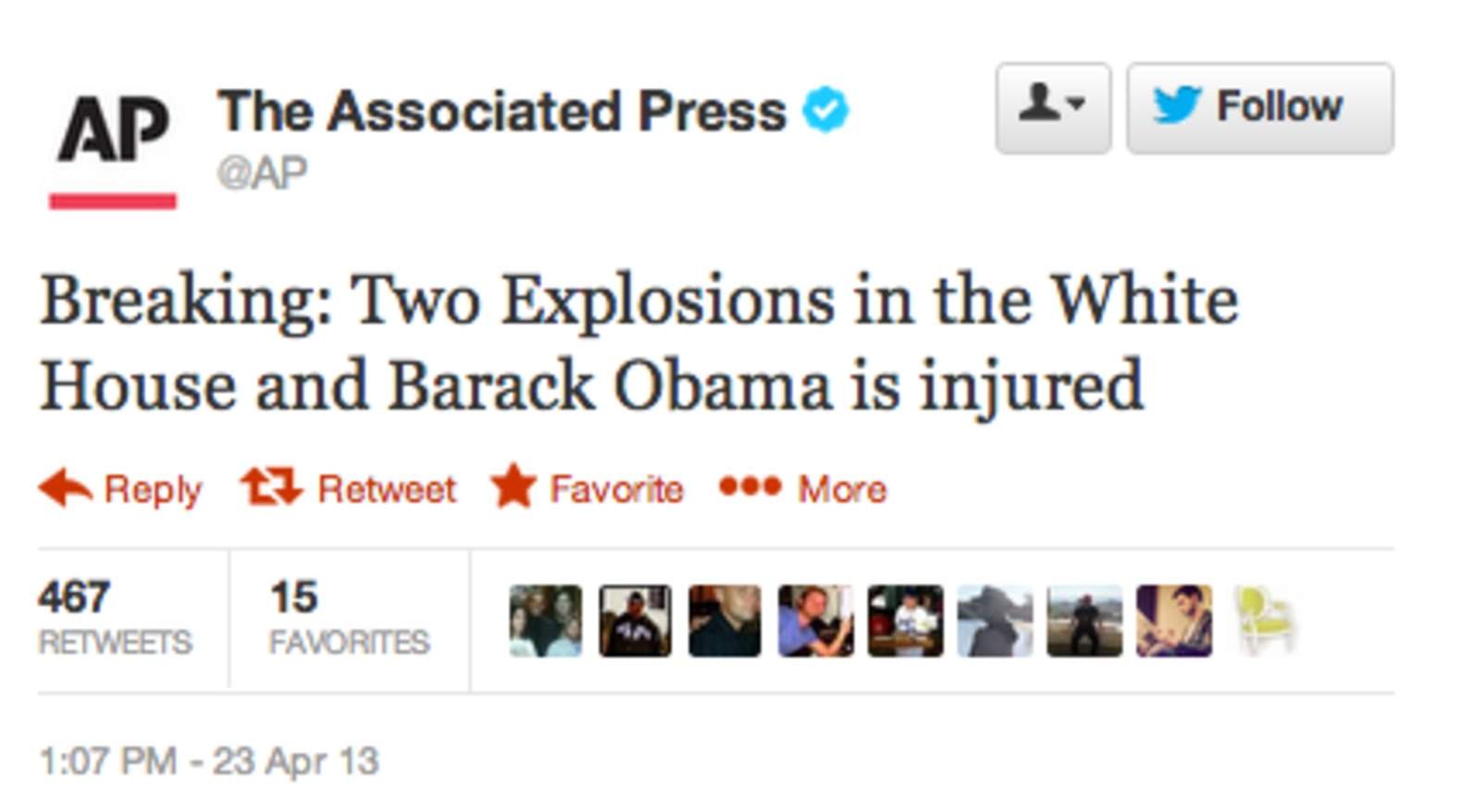 The AP hoax Tweet that caused a financial wobble.

On 23 April 2013 a “hoax tweet” was sent from the Associated Press, which appeared to have had its account hacked. The tweet read: “Breaking: Two Explosions in the White House and Barack Obama is Injured” and caused widespread panic in the financial sector. The US stock market crashed within minutes and the CBOE Volatility Index, also known as “the fear index” because it predicts potential volatility in the market surged 10%.

During this storm, the S&P 500, the NASDAQ and crude oil all dropped 1% and the broader market apparently lost almost US$200 billion.

It seems that incorrect information, rumours, hoaxes and hearsays will inevitably bamboozle financial markets from time to time. The consequences appear frightening but some argue this sort of noise is actually necessary for trading.

The American economist and former president of the American Finance Association, Fisher Black has argued that some traders, known as noise traders, act on mistaken or incorrect information and feel overly confident that this information gives them an edge but that this is in fact a false sense of security. Even more alarmingly, Black suggests that noise trading is in fact essential to the existence of liquid markets and that noise from these traders makes financial markets imperfect, which in fact makes them possible.

If markets were efficient in the sense that everybody has access to, and can act on, correct information, there would be no such thing as profitable trading, so trading would stop.

If traders won’t trade, the market will no longer be liquid. That would be the end of it. There would be no information in stock prices and the scarce capital of society would be be misallocated. Markets must suffer from imperfection and for that to happen, some traders need to be less well-informed than others. Some act on information and others act only on noise. And so the market keeps moving.

In a world in which businesses rely so much on algorithms to automate their processes, noise can infiltrate the retail sector too. The results can be more amusing than alarming, such as when a book about moths ended up being listed on Amazon at a price of more than US$23 million. Behind this absurd tale was the use of automatic price-setting algorithms by two retailers – Bordeebook and Profnath. Each had set their prices according to what the other was doing. Bordeebook’s algorithm would set the price at 0.9983 of whatever Profnath was charging and the latter was setting its own price at 1.270589 more than its rival. This automatisation of price adjustment led to the gradual increase in price that ultimately resulted in the absurd valuation of the book.

If noise traders are needed to make financial markets function, perhaps noisemakers are just as necessary for the functioning of the blogosphere. Black seemed to anticipate this when he wrote in 1985: “I suspect that if it were possible to observe the value of human capital, we would find it fluctuating in much the same way that the level of the stock market fluctuates.”

Over in finance, the smart money drives out the dumb money. Sophisticated traders, have adequate information and rational expectations. They can correctly balance asset price against its fundamental value. They will win out over noise traders, who make bad decisions based on informational misconceptions and false beliefs about a risky asset’s price and the underlying financial instrument’s fundamental value.

Noise makers or trolls in the blogosphere and on social networks may fuel the fire of heated debate and facilitate exchanges of opinions.

Bubbles of opinions, or conviction peaks, may grow accordingly for or against a certain company, person, position, policy or viewpoint without necessarily reflecting real personal preference or even the facts. False information can spread online and can have serious consequences, as was seen in the high-profile case of Robin McAlpine in the UK.

But if it becomes clear that the aligned convictions of Twitter users or bloggers are based on noise and social proof rather than correct information and convincing arguments, then the bubble that has been created may quickly deflate. If no new evidence emerges to fan the fire, the Twitter storm dies out.

If the rumours are based on correct information, they are more likely to endure. As we become more accustomed to using new media, we, like the well-informed stock broker, should be able to learn how to separate the wheat from the chaff, the bad information from the good.

Vincent F Hendricks does not work for, consult to, own shares in or receive funding from any company or organisation that would benefit from this article, and has no relevant affiliations.