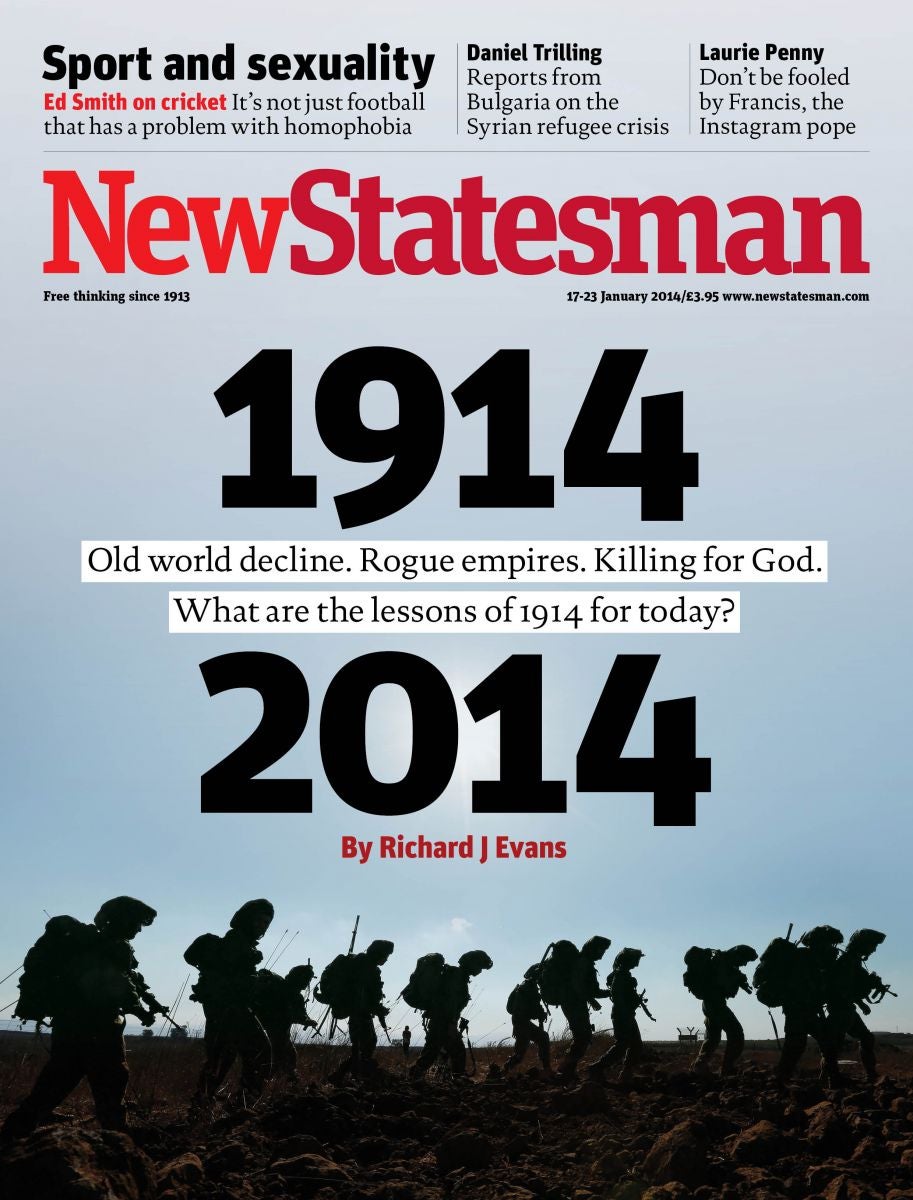 THE POLITICS INTERVIEW: DOUGLAS ALEXANDER
Just a week after the shadow chancellor, Ed Balls, signalled a rapprochement between Labour and the Liberal Democrats in an interview with the New Stateman, his shadow cabinet colleague Douglas Alexander has told the magazine unequivocally that he is “devising a strategy for a majority government” and poured cold water on the idea of a Lab-Lib coalition.

Giving his first major interview as general election co-ordinator for Labour, Alexander rules out a thawing of relations between the two parties and delivers a stinging attack on Nick Clegg:

Alexander’s views diverge sharply from those of Ed Balls, who last week revealed he was on “very friendly and warm” terms with the leader of the Liberal Democrats, adding that he understood “totally why Nick Clegg made the decision that he made to go into coalition with the Conservatives” and had “no reason to doubt his integrity”.

Alexander insists that the only area of agreement between the two parties is in the matter of televised leaders’ debates in the run-up to polling day in 2015. Although both Labour and the Lib Dems are ready to sign up to a “333” formula (the three main party leaders featuring in three debates over three weeks), the Tories have refused to commit. Alexander accuses the Prime Minister of avoiding his “job interview in front of the British people”:

“There’s only one empty chair at the negotiation and it’s the chair that should be filled by the leader of the Conservative Party . . . David Cameron believes that, with deeper pockets and probably more media support, he can avoid the scrutiny and spotlight of TV debates. But I think his silence will look like arrogance in the minds of the British people if he doesn’t take up the offer that has been made. He can run but he can’t hide.”

On Labour’s “New Year offensive”:
Alexander uses the interview with the NS to signal a clear change of gear ahead of the general election, telling Behr:

“In the coming days you’ll see the opening of a new front in the election battle as we not only focus on the immediate concerns and anger felt by voters about contemporary concerns but talk about how Britain can earn its way to higher living standards in the future.”

On the battle lines for 2015:
With senior Tories expecting a defeat for Ed Miliband in 2015 akin to the one Neil Kinnock suffered in 1992, Alexander argues that the other parties are stuck in the politics of the past:

“The Conservatives and Lib Dems are determined to fight a referendum on the last Labour government, not on the record of this government – and the reason for this is that they have a hopeless record . . . They are admitting that their playbook is an election that took place 20 years ago. They are comfortable with the politics of the past, and I’d argue that doesn’t recognise the pretty profound structural change that has happened in our economy.”

Stands firm against a referendum on Britain in the EU
Alexander upholds Labour’s stance on Europe (reform, not exit) and refuses to back a referendum:

“We’ve been consistent in saying the priority is stability, growth and jobs. We don’t believe that to commit now to an In/Out referendum is the right choice for the country. That was our position last month and last year. The party that has been continually shifting its position is the Conservative Party.”

Richard J Evans, Regius Professor of History and President of Wolfson College, University of Cambridge, delivers the definitive riposte to Michael Gove’s comments on the First World War in a wide-ranging essay on the lessons we can learn today from 1914.

In the latest instalment of a war of words between the Education Secretary and the distinguished historian that began in the pages of the New Statesman last March, Evans demolishes Gove’s favoured interpretation of the First World War and condemns his reading as historically inaccurate:

Nothing could be less plausible than the current attempts of Conservative politicians and writers such as Michael Gove and Boris Johnson to portray the outbreak of the First World War as a clash between Britain’s liberal democracy and Germany’s authoritarian militarism.

In 1914 40 per cent of adult males in Britain did not have the right to vote; the troops who signed up were not volunteering to defend rights that nearly half of them lacked. All adult males in Germany could vote. The largest political party in Germany, the Marxist SPD, initially opposed the war, voted for war credits only because the government successfully presented the issue as one of defence against tsarist despotism, and was committed to a peace without annexations. By the second half of the war the kaiser had been forced to concede democratic reforms in Prussia. Kaiser Wilhelm – erratic, indecisive, unstable – was not Hitler. Imperial Germany was not a dictatorship.

Evans argues that the centenary of the First World War is a vital opportunity to gain important insights into the state of the world today:

As we enter the centenary year of the outbreak of the First World War, many uncomfortable parallels with our own time spring to mind. In 1914 the superpower that dominated the world, controlling the seas and ruling over a global empire of colonies, dominions and dependencies – Britain – was being challenged by a rival that was overtaking it economically and building up armaments on land and sea to assert its claim for a “place in the sun” – Germany. All of this is alarmingly close to the situation today, when America’s global supremacy is increasingly being challenged by the rise of China.

In the early 21st century, however, when the threat of a nuclear conflict between the world’s leading powers has receded, the lesson we need to learn from the catastrophe of 1914 is a different one. Although France, Germany and other participants in the First World War will be telling us to stop a repetition of the disaster by building European unity and understanding, the focus of politicians should really be on the Middle East, the Balkans of the early 21st century, which still threaten to explode into a wider, more dangerous conflagration.

ROBIN INCE: WHY CHRISTIANS AREN’T OPPRESSED
The comedian and writer Robin Ince angrily rebuts claims by Cristina Odone in last week’s issue of the New Statesman that Christians are being pushed out of public life by an intolerant liberal majority. In a forceful column, he argues that Odone has confused a “loss of advantage with an act of oppression”:

Writing in the last issue of the magazine, Cristina Odone says she feels her rights as a taxpayer, a citizen, and a Christian are being trampled on. She warns of a world around the corner in which religion will be a secret activity behind closed doors.

No one in our society has it all their own way: as an atheist, I am just as much of a trampled-on taxpayer and citizen as Odone. I pay for the BBC, yet nobody non-religious is permitted on Radio 4’s Thought for the Day. Humanists are not allowed to lay a wreath during the annual remembrance ceremony at the Cenotaph. (The 14 faith groups that reviewed the ceremony decided this – the same groups that have supposedly been pushed out of the public arena.) There are 26 bishops in the House of Lords, there solely because of their religion.

We can all play the victim game if we fancy it. Just as some men bleat that they are the oppressed because of feminism, Odone confuses a loss of advantage with an act of oppression. This is the shock of those who are losing their divine right to dominate.

THE POLITICS COLUMN: RAFAEL BEHR
In his column this week the NS political editor, Rafael Behr, suggests that doubts are mounting about the wisdom of Lynton Crosby’s “barnacle-stripping” approach as some Tories decide to break ranks:

The Prime Minister’s election strategist advised Cameron to shed small policies that impede the flow of a campaign message through the airwaves. Crosby’s arrival had an immediate impact, with Tory MPs becoming notably more uniform and aggressive in their deployment of centrally dictated attack lines during 2013. But the edges are already fraying and not everyone is persuaded by the virtues of monomania . . .

There is nothing unusual about parties containing rivalries and schisms. Labour is packed with them. What should worry the Conservatives is the apparent trajectory away from message coherence as the election nears. It suggests that Crosby’s skills as a disciplinarian are overrated or that some Tory divisions simply cannot be contained.

Michael Brooks on the science of modern crowd control

George Eaton on why some Conservatives want to renew capitalism

Nina Caplan on the perils of a “dry” January