The most famous work by German artist Hannah Höch (1889-1978) remains Cut with the Kitchen Knife: Dada Through the Last Weimar Beer Belly Culture Epoch (1919), exhibited at the International Dada Fair in 1920. One of Höch’s largest collages, Cut with the Kitchen Knife showcased both the satirical possibilities and political ambiguities of the form, which she pioneered. Using the titular ‘kitchen knife’ to symbolise her cutting through male-dominated society, Höch incorporated newspaper headlines, animals, industrial landscapes, and political or cultural figures, loosely divided into ‘anti-Dada’ and ‘Dada’ sections, leaving open the question of which represented the most positive force in the new Weimar Republic. 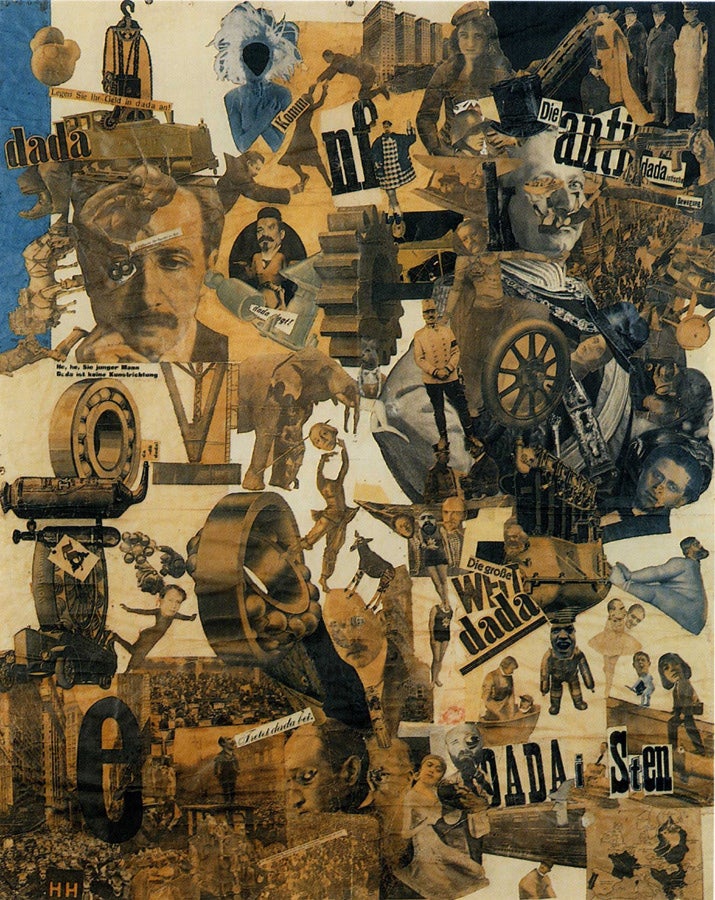 Although the Dadaist ‘anti-art’ that arose in Zürich and Berlin during the First World War had opposed militarism, monarchism and conservatism, the movement’s fundamental negativity complicated its relationship with socialism. Dada painter George Grosz was unwilling to lionise the proletariat as a counterpoint to his Pillars of Society, which its ruling class heads full of excrement, and years later, Richard Hülsenbeck explained that when they sought a target for their resentment, the Dadaists asked themselves “What is the bourgeois?” and “made the sad discovery that we were all bourgeois”, which kept the group from the Communist affiliation of their Surrealist successors.

Although it attacked the bloated, beer-fuelled German military after the war and the crushing of the revolution of November 1918, Cut with the Kitchen Knife was not didactic. Rather, it presented an array of images – the deposed Kaiser and new president Friedrich Ebert in the ‘anti-Dada’ section, Marx and Lenin with Grosz and Höch, fellow montage artist John Heartfield and Dada artist Raoul Hausmann, who was Höch’s lover from 1916 to 1922. Sadly, in the Whitechapel Gallery’s retrospective – the first in Britain – we see only a detail of its Dada section, with the fragile original in Berlin’s Neues Nationalgalerie, with the whole appearing in the catalogue.

There are 120 other works from Höch’s life, however, with the downstairs gallery charting her development until the end of the Republic, with a few collages from the mid-1930s, and two upstairs looking at how she worked in private after the Nazis declared her art Degenerate, and how she resumed her career after 1945. The first section is strongest, showing how Höch’s aesthetic and political interests evolved, from her involvement with Dada and Hausmann to her European travels, friendships with Bauhaus and De Stijl artists and relationship with female Dutch poet Til Brugman in the late 1920s.

Höch was one of several women associated with Dada, besides artist Sophie Täuber and performer/poet Emmy Hennings, but she was not given a nickname or included in all of the Berlin group’s activities. The significance of her position in Dada, and in Germany, is highlighted: having worked in the industry, Höch often used images from fashion magazines, pasting male heads on to female bodies or vice versa. Her critique of traditional gender roles and how they upheld a conservative society is often subtle, especially when compared to post-war feminist art, but is most effective when making explicit the role of violence in maintaining them: The Father (1920) is particularly jarring, placing a composite of male authority heads onto a woman’s body in a white dress, her feet in stilettos, with a boxer punching the baby in her arms.

Höch’s engagement with the mid-1920s idea of the ‘New Woman’ also emerges strongly. The ‘New Woman’ had bobbed hair, worked, and had sex – a product of getting the vote, and Article 119 of the Weimar constitution stating that marriage was ‘based on equality of the sexes’. However, many remained in low-status work with unequal pay, and married women were not allowed jobs if able-bodied veterans could take them. Within her circles, Höch was the New Woman, sharing both her style and her frustrations, and her background made her acutely aware of how this figure was a media creation and an advertising target. Portrait of Hannah Höch (1926) and another from 1929 show her looking like the New Woman, with her short hair and androgynous dress, but far from satisfied, let alone liberated.

Unlike many of her contemporaries, Höch stayed near Berlin between 1933 and 1945. Unable to exhibit, she began collating the Album – a change in her method, putting existing images together in a way that, shown here in a book, allows viewers to find meanings in their juxtaposition, rather than cutting fragments together to generate new works. Her interests in the New Woman and ethnography remain constant, but overt visual messages are resisted – unsurprisingly, given the conditions.

The collection of post-war works in Gallery 8 shows how Höch first borrowed elements of Dalí or Magritte’s Surrealism, and then turned towards a more abstract style, in her ‘Fantastic Art’ which explored the ‘tension … between the world of ideas and the real world’. These were often more colourful than her Dadaist montages, but become repetitive, being most successful when Höch revisits her inter-war social concerns. Homage to Riza Abazi (1963) presents a jumble of Orientalist signifiers of female beauty to Western audiences, with Höch’s techniques retaining the power to defamiliarise. Her huge Life Portrait (1972-73) shows Höch from childhood to old age, often with the Dada artists she’d outlived, closes the exhibition, letting her have the final word on a history that has often excluded her, commenting on her times with all the scale and force of Cut with the Kitchen Knife.

Hannah Höch is at the Whitechapel Gallery until 23 March 2014