Fifty years ago, two academics set out to study the 1964 general election. Aside from tracking the influence of the usual issues, David Butler and Anthony King pointed to the growing importance of a new issue in British politics: immigration. The picture they painted is eerily familiar: a heavy majority of voters believed there were too many immigrants; politicians were accused of joining in a conspiracy of silence on the issue; the then-Conservative leader, Sir Alec Douglas-Home, warned that a million Commonwealth migrants were waiting to descend on Britain; and renegade local campaigns played viciously on these concerns, as in Smethwick where voters were given the infamous slogan, “If you want a nigger neighbour, vote Labour” (which Douglas-Home refused to publicly repudiate).

Fast forward 50 years, and immigration looks set to dominate the next two big elections in British politics: the European elections in May 2014, and the general election in May 2015. And not a lot has changed since the 1960s. British voters remain strongly in favour of reducing immigration and hostile toward immigrants and are now more so than their European neighbours. Commentators attack political elites for not listening. And claims that a tsunami of new migrants from Bulgaria and Romania are about to arrive and detonate a crime wave are now entrenched in the public mindset. Confronted with this picture, David Cameron has announced plans to curb benefits for these migrants, in the hope that many will read such detail and be persuaded to move elsewhere. But while the changes may surface in Bulgarian and Romanian newspapers and have their intended effect among a handful of migrants, they are unlikely to remedy a deeper problem within our immigration debate. Unlike the 1960s, this is now having a sustained and extremely damaging impact on our politics, and here’s why.

To understand how the immigration debate is impacting on British politics, take a look at the chart below. This is based on average responses in different opinion polls to the question of which political party do you trust/think would handle immigration the best. The purple line is the percentage of voters who reject the three mainstream parties on immigration, and who have switched to an outsider party, like the UK Independence Party, or, perhaps in earlier years, the British National Party. The black line is the percentage of voters who go even further, telling pollsters they are unwilling to back any party on immigration, or do not know who to back.

This shows, firstly, how outsider parties have become a far more significant force. Their support on immigration first peaked in 2006, a year when the BNP were enjoying gains in areas like Barking and Dagenham, UKIP had a record presence in the European Parliament and public concern over immigration was about to reach an all time, which it did the next year when 46% of voters (unprompted) told Ipsos-MORI that immigration was one of the most important issues in the country. Support for insurgents did subside, particularly as the Conservatives in opposition improved their image on immigration, but by 2010 it was once again on the rise. Since then, ‘the others’ have closed in on the main parties asgeneral public disillusionment on immigration has grown. Labour always lagged behind the Tories on immigration, but back in 2005 they were still at least ahead of ‘the others’ by a clear 18 points. By 2010, this had shrunk to just 8 points and, so far this year, to just 1.3 (which should press panic buttons). The disenchanted mass has also closed in on the Conservatives, albeit to a lesser extent: whereas in 2005 the Conservatives were almost 32 points clear of the others, today that has shrunk to barely 12 points. 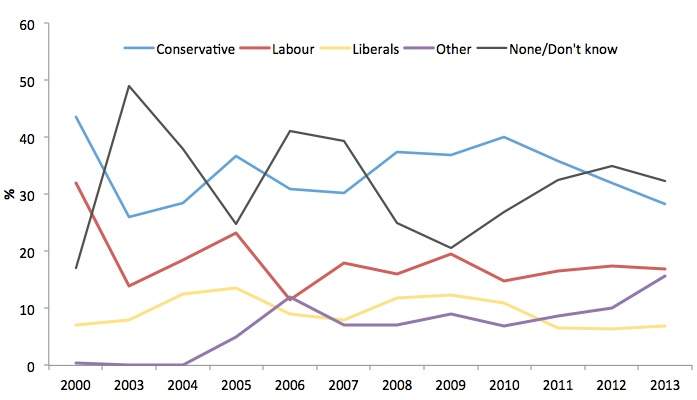 We can gain a clearer picture of this growing disconnect between the established parties and voters on immigration by pooling these disenchanted groups together. By placing those who no longer back any of the main parties on immigration, with those who reject all political parties, and those who don’t know who to trust, we are left with a picture that is even more striking – and worrying. As shown below, the overall share of the electorate who, in one way or another, have abandoned the mainstream on immigration has rocketed from almost 30% in 2005 to almost 48% in 2013. If we take a further step back, then since 2001, the number of voters who do not trust the British political mainstream on immigration has more than doubled.

To be sure, public disillusionment over immigration has peaked on two earlier occasions, in 2003 and 2006-07, amidst earlier debates over asylum and EU expansion. But since 2010, it has been consistently on the rise, and never before has this trend lasted for so long. This is especially worrying for Labour who have consistently trailed among this disenchanted lump of voters since 2000, reflecting how they have simply not connected in any meaningful sense on this issue. And the issue looks set to become only more important as concerns over the economy subside, which is one big reason why UKIP will finish strongly in May, including in Labour areas. 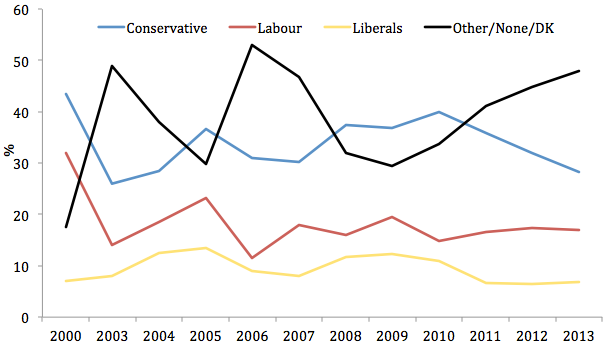 This growing gulf should worry us all, as there is evidence to suggest it is undermining not only public trust in mainstream parties, but overall levels of trust in our political system. In other words, the more we stoke public anger and distrust on immigration, the more we threaten the stability of our political system in general. Back in the 1960s, voters were certainly angry, but most were at least willing to express their anger by remaining within the mainstream of political life. But today almost half of the electorate shun our main democratic organs on this issue. Those on the margins will celebrate; but those in the moderate majority should be deeply worried.

As in the 1960s, some pundits trace this disconnect to a failure among elites to allow an ‘honest debate’ about immigration, or to give voters the policies that they want. But this is mostly nonsense for two reasons. First, for over a decade, from the northern riots in 2001, to the London bombings and to the current furore over EU migration — Britain has tirelessly debated immigration and its effects. To the average tourist we seem obsessed by the issue (and a bit nasty, actually). Those who argue we have not been given a national debate are like students who turn up to seminars to argue with everybody, but having not actually read anything. It is also often the same voices who willingly fuel mass hysteria and open xenophobia, assuring voters they are right to demand what governments cannot deliver under current treaties, to conclude there is an active conspiracy among elites to ignore their wishes, and to deliver a message similar to that sung by Veruca Salt in Willy Wonka’s Factory: “I don’t care how/I want it now”. These corrosive and irresponsible voices should be called out, and more forcefully by those in politics.

Second, irrespective of whether you agree with the content, voters who are concerned over immigration have been given a sustained array of policy offers. Just think for a second about what the current generation of voters has been given on immigration: reductions in net migration; criticism of multiculturalism; talk of limiting EU migrants’ right to benefits; cuts to international students; proposals to stamp down on ‘health tourism’; vans urging illegal migrants to ‘go home’; preference over migrants when distributing public resources; and even talk of withdrawing from the UN refugee convention just so that we can remove asylum seekers. Yet despite all of this, public discontent with the political mainstream has gone up, not down. Public distrust of our politicians has gone up, not down. And overall levels of public concern about immigration are going up, not down. This is why the new plans on EU migration simply won’t satisfy the British electorate, or help the ratings of Cameron and the Conservatives on immigration. Voters have been raised on a diet of demand, demand and demand, and are ignorant of how policy works or the constraints that government is under.

There will come a point, which perhaps we have already passed, where the damage that is being inflicted on our politics becomes irreversible. Rather than cling to the conventional wisdom that disenchanted and perhaps would-be UKIP voters will respond rationally to a change of policy or tougher rhetoric, we should accept the reality that irrespective of what is offered, more and more voters are moving from the mainstream to the margins, guided by a toxic and – to be frank – nasty group of opinion-makers in our society who appear to relish sowing the seeds of xenophobia, protest and division. Make no mistake: unless we chart another course this ‘debate’ will have serious and long-term effects on our politics, and the already fragile link that binds our citizens to the democratic arena.

Matthew Goodwin is Associate Professor at the School of Politics and International Relations at the University of Nottingham, and Associate Fellow at Chatham House. He tweets @GoodwinMJ

Matthew Goodwin would like to thank Dr Will Jennings at the University of Southampton for some data used in this piece.