Cartography is a demanding technical skill. The best maps, those that define their subjects, can become icons of design in themselves. London’s Tube map is one of these – so much so, that it’s rare when a major city’s subway network doesn’t look to TfL’s map for inspiration.

The story goes that London Underground was sceptical of Harry Beck’s Tube map, and only produced a small run of pamphlets featuring it in 1932 as an experiment. Its immediate popularity proved that Beck’s insight – which seemed counter-intuitive to many people at London Underground – was correct. When trying to get between stations all you want is the relationship between them, not the geography above ground.

But how to represent that relationship? Beck looked to circuit diagrams, connecting stations with lines that were strictly at 90- and 45-degree angles. No curves. Ticks and diamonds (now ticks and circles) for stations and interchanges. Compared to the horror of, say, New York City’s subway map, it feels clean, and instantly comprehensible at a glance.

That’s an important thing for a subway map – people will be in situations where they need to check where they are in their journey with only a brief look, often out of the corner of their eye, while standing up in a crowded space or reacting to news from the driver of delays on another line. Sure, when entering a station there’s more time to pause, gaze, and absorb, but the key to a good subway map is simple: the greatest amount of information in the shortest amount of time.

At MIT, Ruth Rosenholtz and her team from the Department of Brain and Cognitive Sciences have been working on how much humans can comprehend through peripheral vision. MIT’s in Boston, and the city recently held a competition to design a new subway map. Here’s the existing one (click images to expand): 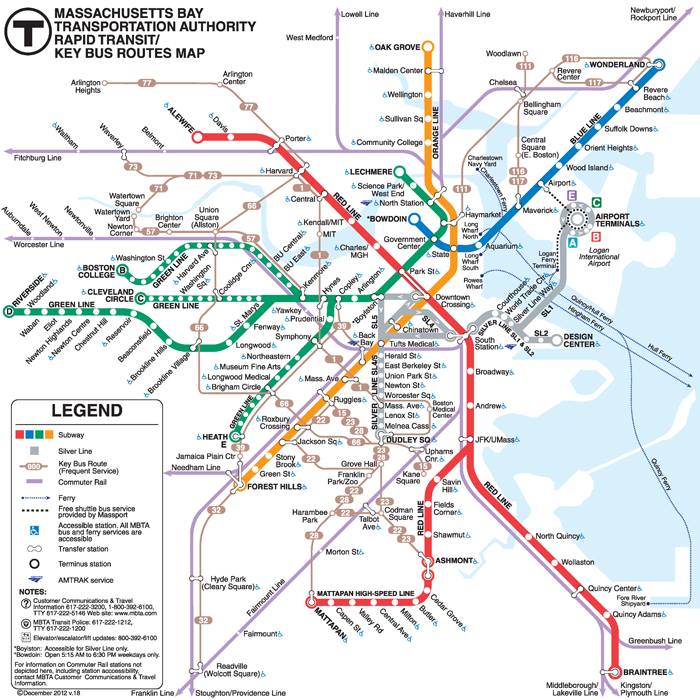 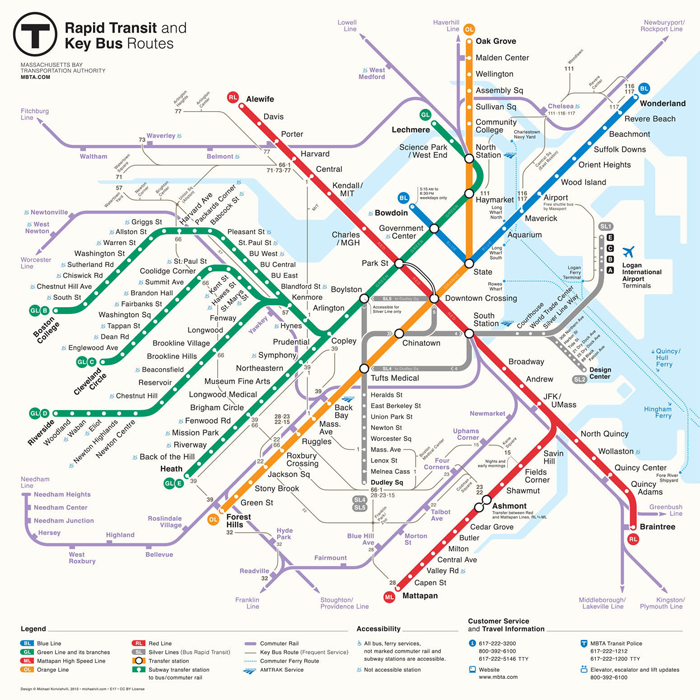 There’s something about the second one that’s just better, isn’t there? But how to tell exactly what that is?

Research into peripheral vision has shown that the brain’s comprehension of things outside of the point of focus is muddled. Our brains do a good job of fooling us that we have a larger field of vision than we actually have, but if you’re looking at a specific station on a subway map, information that’s further away from it gets distorted – it’s a vague impression of colour and shape, but nothing more.

Rosenholtz and her team have created visualisations they call “mongrels” that simulate what the brain actually sees when it looks at a map, as a way of verifying the quality of a map’s design. The better the map, the less information gets lost in the mongrelisation. It’s as close as you can get to a snapshot of what humans truly see when they glance at a map in the setting of a subway train.

Here’s the mongrel for Boston’s existing map, for someone who’s focusing on the Kendall/MIT stop on the red line:

And here’s the mongrel for the map contest winner, focused on the same station: 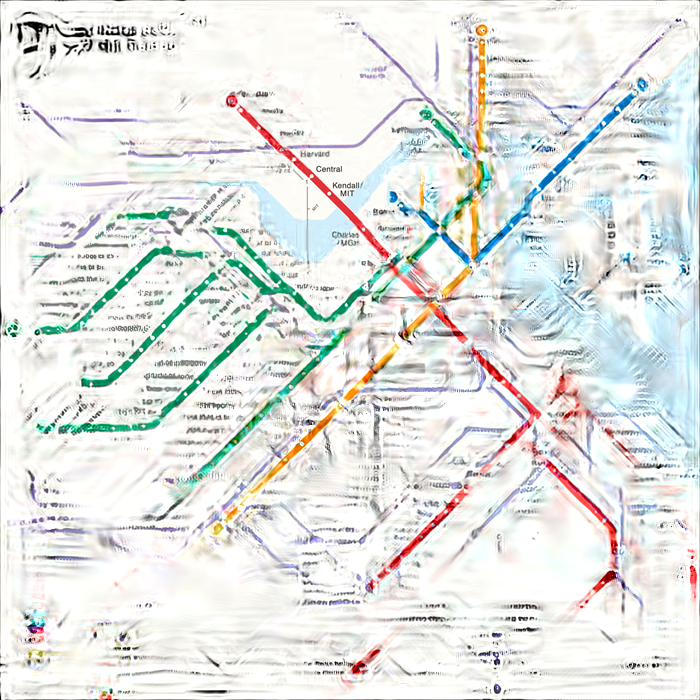 Now it’s possible to see why the new map is better. The silver line fades into the white background in both, which isn’t great, but the parallel layout of the lines and the greater space between station names makes it possible to still work out the structure of the system without everything washing out. Simply put, at a glance, the second map always gives you the full system and your place within it, and the first one doesn’t.

I emailed Rosenholtz about these maps, and she and her team very kindly produced a similar mongrelisation of the Tube map for us. Here it is:

Turns out, it’s not too bad! It’s centred on Oxford Circus, and everything around it out to the Circle line and beyond, along the lines that have been around for decades, looks pretty good. It’s a much bigger network than Boston’s so everything is necessarily a bit smaller, but that’s unavoidable.

The problem areas look to be the newer additions to the network – the DLR is a mess, and the Overground doesn’t really stand out. In 2015, as the first phase of Crossrail goes into action and TfL takes over the commuter rail lines running through Hackney, that bit of the map is going to look even more complicated and could become more of a mess (and transport blogger Diamond Geezer’s post on this is quite good on this). The Tube map has had things added to it over the years around the edges without the central section really being tweaked in kind, and it might be time to consider rejigging things in the middle to make more space for the outer lines.

But still, it’s still nice to know that, even though Beck’s map turned 81 this year, its initial assumptions about map design were right on the nose.