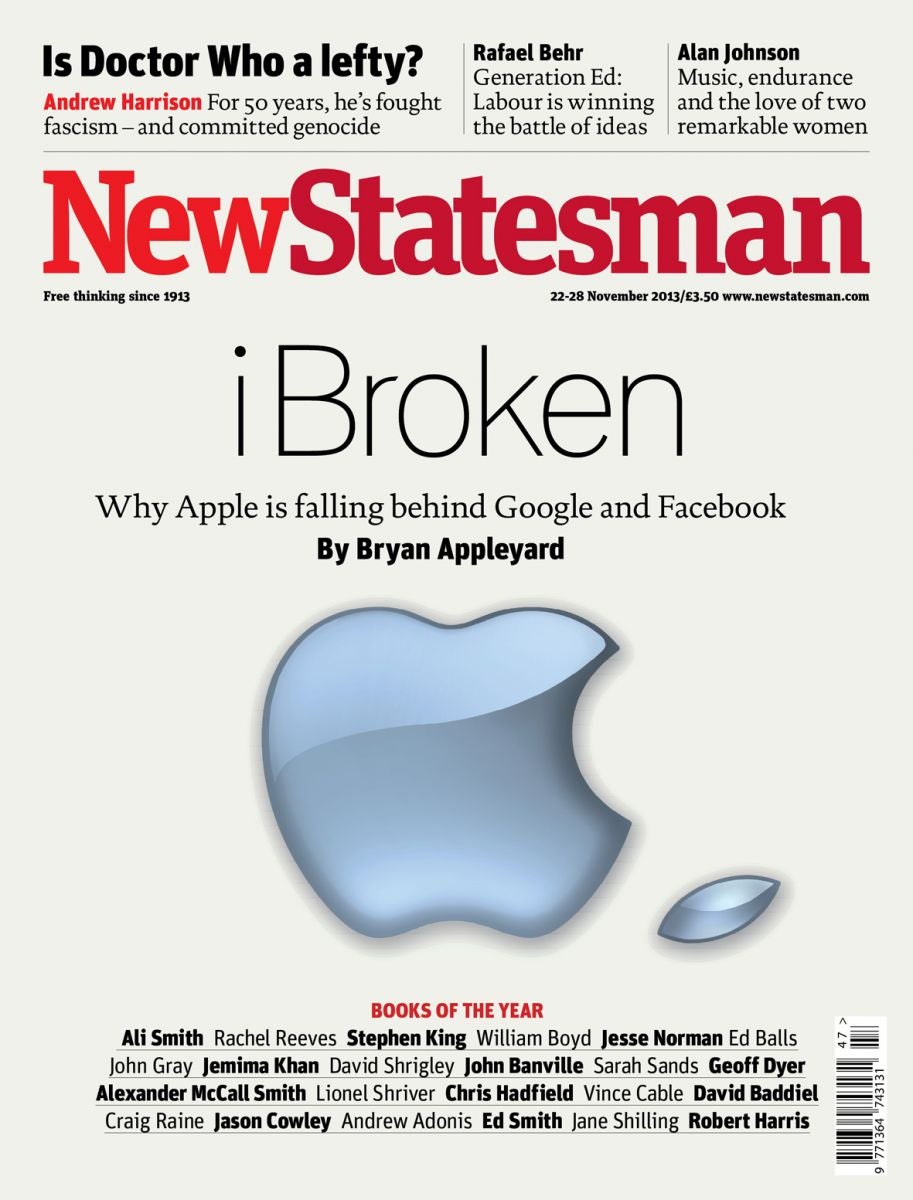 GENERATION ED: RAFAEL BEHR ASKS “WHAT IS MILIBANDISM?”
IN THIS WEEK’S POLITICS ESSAY . . . AND IN A SPECIAL REPORT FOR BBC NEWSNIGHT TONIGHT

BRYAN APPLEYARD ON HOW THE TECH GIANT’S CROWN IS SLIPPING

“It’s daft to assume you can only be counted as a [BBC] supporter if you think the corporation should expand still further or that it should have the whole licence fee for ever.”

ALAN JOHNSON: WHAT MAKES US HUMAN?

ANDREW HARRISON ON THE LEFTY POLITICS OF DOCTOR WHO

MARTIN GAYFORD ON THE DEATH AND LIFE OF MICHELANGELO BUONARROTI

FROM THE ARCHIVE: DORIS LESSING

GENERATION ED: LABOUR IS WINNING THE BATTLE OF IDEAS

In this week’s Politics Essay (and in a special report for BBC Newsnight tonight), Rafael Behr, the NS’s political editor, explores Ed Miliband’s mission to bring back socialism and reshape the British economy using the three principles of responsible capitalism, predistribution and “one nation”.

Behr argues that Miliband is winning the battle of ideas and that: “It is worth taking seriously the possibility that Britain will one day be governed by a creed called Milibandism.” Though this is not yet a view shared by many in Westminster, he believes that it is “getting harder to write Miliband off”:

A coherent pattern is discernible in the Labour leader’s actions. There is a consistent analysis of what is wrong with Britain and a systematic outline of the remedy.

“The critics are wrong to say that Miliband’s project is erratic or hastily assembled. (If anything, the charge that it is too determinedly intellectual is more fitting.) Milibandism takes a deep perspective, charting long political cycles from the postwar period to the present day . . . Miliband sees David Cameron engaged in a futile effort to breathe life into the corpse of an expired doctrine. He ascribes to himself the role that Thatcher once played, appearing at first as an unlikely leader, doggedly pursuing ideas that threaten to disrupt a complacent orthodoxy. Just as the Iron Lady once anticipated the swing of the pendulum away from suffocating statism, Miliband believes it is swinging away from market fetishism. Or, rather, he thinks it has the potential to move in that direction. ‘Sometimes you have to push the pendulum,’ Miliband once told me.”

“For Miliband, being trusted by the rank and file as an embodiment of traditional Labour values is about more than job security. One part of his agenda that gets little attention but that aides insist is central to the project is the transformation of the party from a rusty bureaucratic apparat to a network of grass-roots activists. That work is led by Arnie Graf, the 69-year-old American pioneer of ‘community organising’, about which Miliband is evangelical. The principle is to win political support street by street, focusing on hyper-local issues and engaging people who would otherwise never go near a constituency party meeting.”

“There are still gaps in Miliband’s programme. His account of how Labour would champion hard-pressed consumers against wicked corporate interests is not matched by a determination to reform the public sector. He is more comfortable talking about market failure than failures of the state. His vision of party reform risks being lost in back-room haggling with the trade union leaders who finance the whole Labour show. His personal ratings, while improving, are still below the levels that usually indicate momentum towards Downing Street.”

The tenacity of Miliband

“It has always been easy to list the ways in which politicians might fail but it is getting harder to write Miliband off. He has displayed a tenacity that disorientates his enemies. Conservative attacks are contradictory. He is weak yet dangerous; ridiculous yet sinister. The latest Tory line is that he is a con artist, offering flimsy populism in the face of complex problems. So they recognise at least that the left can be popular.”

With the death of Steve Jobs, Bryan Appleyard fears the tech giant’s crown is slipping. The company is failing to innovate, he warns, and its Silicon Valley rivals are closing in.

“The reason [for Apple’s lowered share price] is market scepticism about the post-Jobs regime. [CEO Tim] Cook is not Jobs and, since the iPad, there has been no spectacular product launch, only the usual stream of updates and improvements. His more conventional management practices are said to be counter-innovative. In addition, competitors are thriving, and most importantly Google and Facebook seem to have solved the puzzle of how to make money out of advertising on mobile devices. All of which is just another way of saying that Steve Jobs is dead.”

“Consider this: Apple makes very few products – Cook once said its entire range could fit on a tabletop – and they are more expensive than the competition. So how has it become one of the biggest companies in the world? It has done so through the power of mystique, aspiration and industrial design; through, in short, the narcissistic, brutally competitive aesthetic obsessiveness of Steve Jobs. Apple continues to be formidably profitable – its stores, for example, have the highest sales per square foot of a retail outlet in the world. Yet Apple is not a viable business model: it is, like Jobs, an unrepeatable corporate freak show. Can it possibly be, post-Jobs, a freak show that runs and runs? The reviews are not yet in but doubt is priced into the shares.”

What can Apple do next?

“The next move in this game is, therefore, the cyborg – the part-human, part-machine, dreamed of by science-fiction writers. This is all about wearable computing or ‘technologically enhanced clothing’, as [editor of the Cult of Mac blog Leander] Kahney puts it. The widely rumoured iWatch may be the first step in this direction, though this would hardly be revolutionary, as there are many such devices already on the market. What follows may be, for example, clothing that tracks your vital signs – blood pressure, heart rate, and so on – giving you instant feedback so that you can adjust your behaviour. Apple Stores could thus become, in part, clothing outlets . . .This would be a move in the great Jobs tradition: the annexation of a new industry.”

“At the moment, Google is the favourite for gold, with Facebook as a possible silver if it can control its appalling public relations and crass handling of private information. Apple is on the ropes. I hope it won’t stay there for long for one simple reason. None of these companies is especially loveable; they are all power- and money-hungry operations that seem to think they have a right to remake the world in their own image . . . Yet Apple has a redeeming feature. It does, in spite of everything and thanks to Steve Jobs, make things beautiful.”

BOOKS OF THE YEAR

“My favourite (cook)book of 2013 is The Vietnamese Market Cookbook (Square Peg, £20) by Van Tran and Anh Vu, founders of the BanhMi11 street-food stalls in London. The recipes are not hard and the ingredients fairly easy to come by. But the balance of flavours is subtle and it is easy to get things out of kilter. I can recommend the pho ga noodle soup and the summer rolls, while the shaking beef with black pepper is sublime. For any amateur cook who likes new flavours and is willing to take risks, this book really is worth a try.”

His colleague Rachel Reeves, the shadow work and pensions secretary, also makes a more personal choice: “The book I’ve most enjoyed reading this year is Janet and Allan Ahlberg’s Peepo! (Puffin, £6.99) – to my baby daughter.”

Robert Harris’s novel An Officer and a Spy earns a place on two of our contributors’ lists with both the Evening Standard editor, Sarah Sands, and Andrew Adonis naming it a favourite read of 2013.

Roger Mosey, who has recently exchanged the BBC bunker at Portland Place for the bracing air of Cambridge as the new Master of Selwyn College, ducks a series of brickbats from former colleagues who take exception to the suggestion that his erstwhile employer should slim down:

Some colleagues asked whether I’d miss the newsroom on a busy day and the answer is emphatically no. As a newcomer to Cambridge, I’m knocked out by the city and its people and by what the university achieves, and it’s impossible not to have a song in your heart as you cross the bridge from the Backs into King’s College on a fresh autumn morning. I can say what I think now, too, which is cheering after 30-odd years of friendly corralling by BBC minders.

That was the spirit in which I wrote a piece for the Times a couple of weeks ago suggesting that in tough times the corporation could still do its job while being slightly smaller. Deviation from past orthodoxy is as welcome to some former colleagues as a cat bringing in a mangled sparrow but there was plenty of support, too, including some from unexpected internal sources. The brickbats seemed to be about the principle of criticising the BBC rather than the argument itself. So let me be clear: I believe wholeheartedly in the BBC. But it’s daft to assume you can only be counted as a supporter if you think the corporation should expand still further or that it should have the whole licence fee for ever.

ALAN JOHNSON: WHAT MAKES US HUMAN?

The former health secretary Alan Johnson is the latest contributor to our series asking “What makes us human?” in partnership with Radio 2’s Jeremy Vine show. Johnson gives a moving account of his childhood and concludes that endurance and love are an intrinsic part of our humanity:

I was fortunate enough to spend the first 13 years of my life with two incredible women who happened to be my mother and my sister. My sister, Linda, has been part of my life ever since but we grew up, raised families and now live on opposite sides of the world. If you asked us to define humanity, we’d both say that it was personified in the tiny frame of our mother, Lily, who had deep compassion, enormous courage and a capacity for selfless love that is the essential element of what makes us human . . .

Lily believed in God, although she never went to church. Our moments of worship came when she found a shilling piece to feed the empty gas meter; or a piece of coal as we joined her on the trail of the coal man, picking up the chunks of black gold that dropped from his sacks as he delivered to the big houses in Holland Park. Faith and belief are very human traits, as are laughter and joy.

Charles Bremner’s Letter from Paris on the hapless François Hollande