The Cycle Superhighway 2 extension from Bow roundabout to Stratford is the first of London’s “super” highways for cyclists that might actually be deserving of the name.

From Aldgate to Bow, the first half of CS2 is an often-terrifying run along a strip of blue paint. Two people have died while cycling on it, with the inquests into their deaths taking place last month. There’s no segregation from other traffic, cars can park across it, cyclists have to compete for space with buses, and all-in-all it’s a bloody awful thing. A recent narrowing of Bethnal Green Road – which was meant to introduce some segregated cycle paths – was a missed opportunity to improve things, and all told CS2 fails at its main job, of making cycling safer for cyclists.

The extension of CS2, though, is different. It features such radical notions as actually-segregated lanes, bus stop bypasses (so that cyclists don’t have to overtake buses when they stop), and junctions with two-stage right turn facilities, a clunky way to stop cyclists having to turn and pass through opposing traffic. TfL’s website has some explanations of how they work – here’s a diagram that explains how the two-stage right turn works: 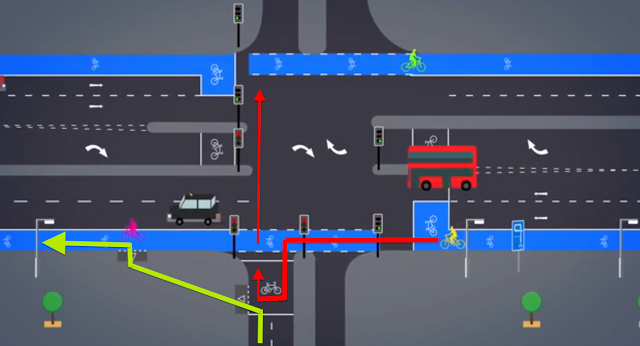 These are good improvements to the roads in east London, and will save lives. However, it’s remarkable how mediocre the newest and best of London’s cycling infrastructure is. New traffic signals have proven confusing for some cyclists, leading to some jumping red lights without realising, while cycling bloggers have noticed that some new drains look to be in the wrong place, causing flooding.

And, of course, the depressing thing is this is the best London has to offer, and yet these are still such rare and counter-intuitive examples of cycling infrastructure that TfL feels the need to explain how to use them.

“But it’s London,” some say, “and the roads are narrow and we’d have to knock buildings down and there’s no room!” To which I say, look at what they did in the Netherlands:

That is the Hovenring, built last year and now nominated for the Dutch Design Award, an intersection on a main road between the city of Eindhoven and the town of Veldhoven. It was created to solve a common problem – cyclists and motorists shared the road below, and the roundabout was getting gummed up with traffic. It wasn’t safe. (EDIT: I’ve had @Amsterdamized tell me that cyclists and motorists were actually segregated at the junction, but even then it wasn’t considered safe enough.)

The solution is a suspended roundabout for cyclists, while the road below – free of a need to make space for cyclists – has been turned into a traffic light-controlled junction. Both groups are better off, and the iconic architecture (it’s not so much a Spaghetti Junction as a… Cheerio Changeover? Polo Mint Interchange?) is a pleasant bonus.

I’m not arguing that we should build a second level of streets around London purely for cyclists (although only because of how much it would cost), but there’s little bravery of thought, little ambition, in London’s cycling schemes. To its credit, TfL is experimenting with things like Dutch-style roundabouts (which segregate cycles and cars), but it remains frustrating to see dreams of Dutch-quality infrastructure manifested so poorly. The Hovenring may be exciting, but also impressive is that iconic projects like that are connected to each other by good quality cycle routes. The simple things need doing right, too.

Just so we’re clear, *this* is why lots of people cycle in the Netherlands. Not because it’s *flat*. pic.twitter.com/zPvz8YWZ6c