“Oh no, not Nigel again!” groaned some Question Time viewers last week as they sat down for the fourth time this year to hear the views of the leader of the UK Independence Party (UKIP). Nigel Farage has appeared on the show no less than 25 times, 15 of which have come since 2009, while in the past four years, a further six slots have gone to other Ukippers like Paul Nuttall, Diane James and Patrick O’Flynn. This means that since 2009, UKIP spokespersons have sat on the panel on 21 occasions, almost double the number for the Greens (11) and more than double the number for Respect (10).

Unsurprisingly, these figures have led some to argue that Farage receives a level of publicity that is not only disproportionate to his party’s actual strength, but also exceeds that given to other insurgents who have achieved what UKIP has not: a seat in Westminster. Some go further, suggesting that parts of the media have a vested interest in supplying UKIP with the ‘oxygen of publicity’ so as to pile pressure on David Cameron and trigger a rightward turn on issues like the EU, immigration and gay marriage. But of course this may all be far more straightforward: Farage is a skilled, media-trained populist who contrasts sharply to an otherwise bland and robot-like political elite. It’s only natural that journalists flock to an outsider who gives them good copy.

But this does raise an intriguing question: exactly how prominent are Farage and UKIP in British media? As part of our forthcoming book in 2014, Revolt on the Right, we used a well-established database (Nexis) to track the number of times UKIP and Farage are mentioned in UK-based newspapers. This is only a small part of the book, which analyses over 100,000 voters and includes interviews with key insiders to explain UKIP’s support and what it tells us about British politics. But it is a useful, ‘quick and dirty’ way of measuring a party’s profile across all newspapers. It does not account for the nature of this coverage (i.e. positive or negative), and does not include radio, television or social media. But given that print media continues to set much of the agenda in British politics, it remains a valuable yardstick. 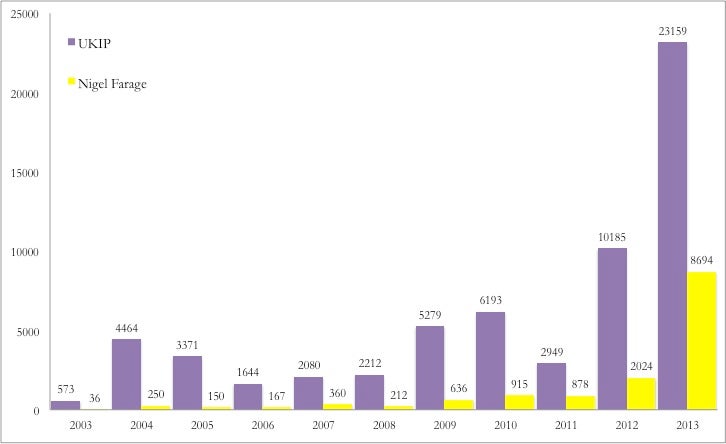 First, in Figure 1, we track the number of citations for UKIP and Farage from 2003, when UKIP was a largely unknown fringe party with only three MEPs, to November 2013, when it had become a serious force, tipped to win the 2014 European elections. This reveals how media interest in UKIP has surged, particularly since 2012. In 2003, the party was not even mentioned 600 times; ten years later it was flagged more than 23,000 times (and only until November). Similarly, in 2003, Farage was barely visible with only 36 mentions, but 10 years later this had rocketed to over 8,000.

Clearly much of this marks a response to UKIP’s growth in the polls. But whereas UKIP enjoyed record gains in 2004 and 2009, the media attention it won after these breakthroughs is dwarfed by the wave of coverage it has received in the past two years. In 2012, UKIP mentions reached a record high of over 10,000, but so far in 2013 this figure has already more than doubled again, and with two months of the year still left to run. Interest in Farage has risen even more steeply – his mentions more than doubled between 2011 and 2012, and have already quadrupled in 2013. It is likely this trend will continue into 2014, as Britain braces for European elections, and then into 2015 as journalists debate the possibility of a UKIP seat in Westminster and the possibility of a EU referendum. 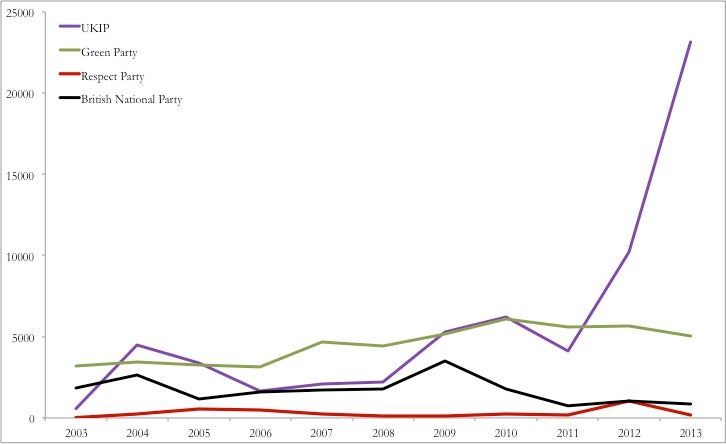 Second, how does this picture compare to other insurgents? Figure 2 compares UKIP’s coverage to the Greens, Respect and British National Party. From 2005 until 2009, the picture was far less rosy for Nigel and his party: they attracted less attention than the Greens and were fighting in the ‘media war’ to move away from the BNP. But since 2011, the party has really come into its own, rapidly moving away from other minor competitors to achieve historically unprecedented levels of coverage. 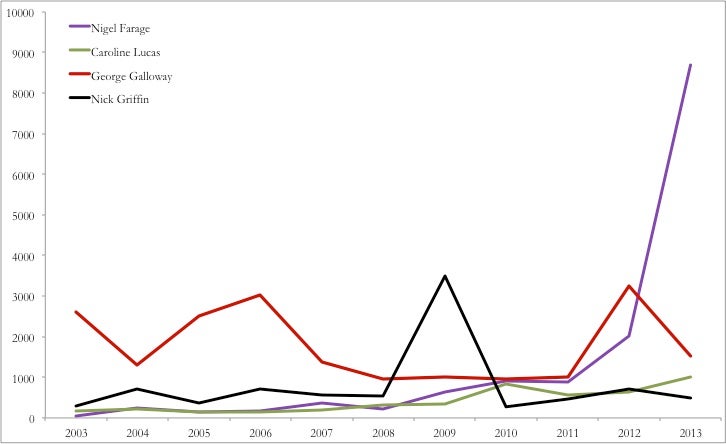 It is a similar picture in Figure 3, which compares Farage‘s profile to that of Caroline Lucas, George Galloway and Nick Griffin. Until 2012, Farage was often eclipsed by Griffin and Galloway (though never Lucas). We can see how Galloway gains profile during the 2005 campaign and then after his by-election victory in Bradford in 2012, while Griffin peaks during his European breakthrough in 2009. Interestingly, Lucas does not attract an equivalent spike in coverage following her breakthrough into Westminster. In fact, in comparison she is nowhere to be seen. Yet since 2012, Farage has rocketed onto a new level, leaving behind other smaller party leaders who have managed to win representation in Westminster. Journalists clearly are not shaped by electoral reality.

We can also put this into a broader context. While his party is now regularly polling ahead of the Liberal Democrats, Farage, at least in terms of media profile, remains some way behind Nick Clegg, unsurprising given that the latter is in government and the Deputy Prime Minister. So far in 2013, Farage has been mentioned almost 9,000 times compared to almost 20,000 citations for Clegg. But he is closing the gap. 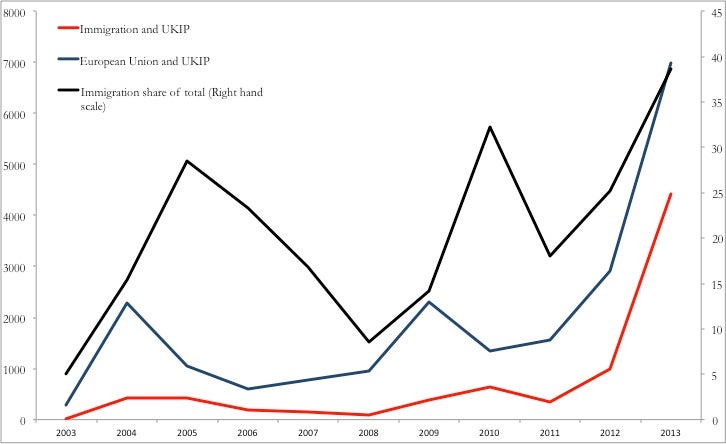 This brings us to our final point concerning the nature of UKIP’s coverage. As Figure 4 shows, UKIP is not only attracting historically unprecedented levels of interest, it is also now beginning to broaden out its ‘media attack’. In previous years, the party was most often mentioned alongside the EU, which is unsurprising given its goals. But since 2011, the number of articles that mention UKIP alongside immigration has risen sharply, representing around 40% of its total coverage in 2013.

This is not coincidental but reflects UKIP’s change of strategy since 2011, which we detail in the book. It is the first piece of evidence that UKIP are entrenching themselves at the centre of Britain’s ongoing debate over immigration and its effects, which given the approaching debate over migration from Bulgaria and Romania, and the fact that public concerns over immigration remain high, also looks set to continue. UKIP’s plan to expand its eurosceptic origins by targeting immigration is yielding dividends, as is Farage’s more aggressive media strategy. In interviews with us, those close to Farage often voiced anxiety about the impact of a relentless schedule on their leader’s health. Some complained how he often gives his personal number to journalists, and refuses to ‘switch off’. The strategy may well be wearing Farage down, but it is also producing results. Whether his party can sustain this interest, and ensure it is strictly for positive reasons, remains to be seen.

Matthew Goodwin is Associate Professor at the School of Politics and International Relations at the University of Nottingham, and Associate Fellow at Chatham House. @GoodwinMJ

Robert Ford is a politics lecturer at the University of Manchester. @robfordmancs

Matthew Goodwin is professor of politics at the University of Kent. His work includes Brexit: Why Britain Voted to Leave the European Union (2017) and National Populism: The Revolt Against Liberal Democracy (2018).