Friend took a photo of this at Rochdale Jobcentre Plus pic.twitter.com/32XERLis2F

Here’s the image in question: 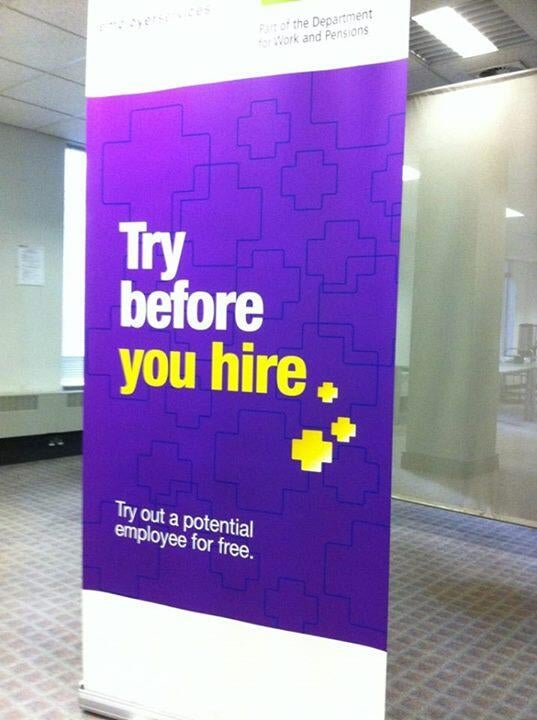 Lockhart later tweeted a correction – the poster is actually in the Employment Suite (a sort of mirror to the Jobcentre Plus, run for employers looking for employees), located in Manchester’s London Scottish House, not in the Rochdale Jobcentre Plus – but, in his own words, “well my Twitter account seems to have exploded – I assume this is out of control now”. And how:

Nice little slice of modern Britain there RT @andymlockhart Friend took a photo of this at Rochdale Jobcentre Plus pic.twitter.com/O0peyr5tcB

@OwenJones84 @andymlockhart Try before you hire? Unbelievable. Employers can just get a succession of ‘trainees’ for free. Slavery!

Try before you hire. TRY BEFORE YOU HIRE. how about “interview properly and commit to training”?? Ffs.

“Try before you hire”. Like people are auld shoes ye try on… or an auld motor… dear god, JCP are utterly revolting

However, a DWP spokesperson confirmed that various “try before you hire” schemes have been in place since 1989 under the Work Trials programme umbrella. Direct from the DWP site:

A Work Trial is a way of trying out a potential employee before offering them a job. Once agreed with Jobcentre Plus, you can offer a work trial if the job is for 16 hours or more a week and lasting at least 13 weeks.

Work Trials are used by roughly two or three thousand people a month, and have been for “years”, the DWP spokesperson told us, and over the last few years has largely been superceded by the very work programmes that the government lost its case on appeal today at the Supreme Court.