Let’s say I work for your phone company. I call you and make an offer: most of your calls are from friends and family, but occasionally business contacts use your home number. If you want – and for no extra charge! – whenever that happens I’ll call beforehand to give you a biography of that person before connecting them to you. Y’know, so you’re better prepared. The only condition is that you need to let me screen all of your calls before they get to you, so I know when you’ll need me to call you first.

Interested? I’m guessing you’re not – it sounds like a reasonably large invasion of privacy for a negligible payoff. And yet it’s not far from the offer LinkedIn has made when it comes to your email, with a new service it calls Intro for its users who are on iOS:

For each of your emails, Intro tries to find the sender of the message on LinkedIn. If we find information, we include it at the top of the message, and you can tap to see more detail.

In other words, your emails go to LinkedIn, and then to you. If one of those emails is coming from someone with a LinkedIn account, it’ll stick a little bar at the top of the message containing a condensed version of that person’s LinkedIn account. And if you send an email to anyone else, it’ll have something similar at the bottom that links to your LinkedIn account. Here’s what it looks like (as mocked-up by LinkedIn): 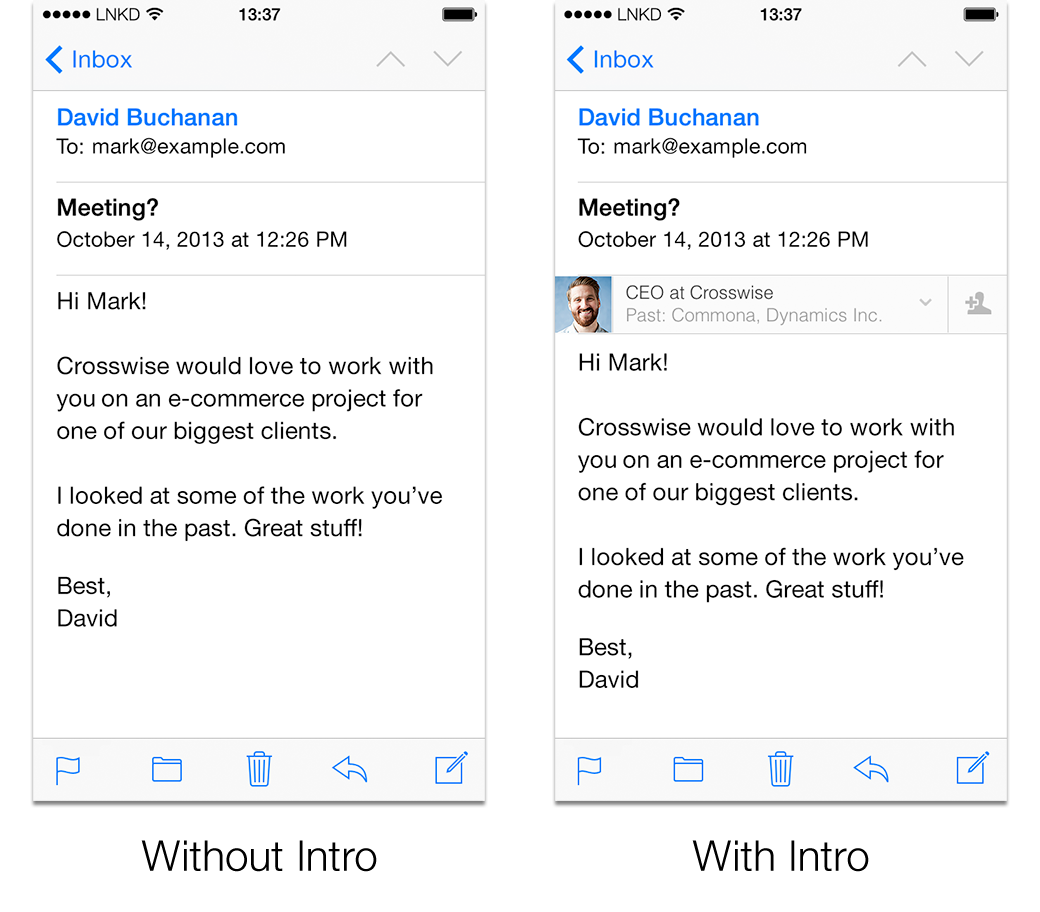 It might seem like a lot of bother, but for LinkedIn it’s worth it if it means people choose to turn the iPhone’s default Mail app into a de facto LinkedIn app. The benefit for the user is that it makes it easier to sort the spam from the wheat, but for LinkedIn the benefit is that they get to define how someone experiences email. That’s a powerful way to get people to pay attention to your site – and LinkedIn is fully aware of just how many of its users ignore all those update emails it sends out all the time.

However, remember that LinkedIn is reading your emails to do this, in a way that exactly mirrors a man-in-the-middle attack. That’s a type of attack where someone slips in between two other computers on a network, intercepting each message that gets passed along and reading it as it goes. Sure, you might consent to it when it’s LinkedIn doing it, but it creates an attractive new target. The weakest point in the network isn’t you, or your email provider, any more – it’s LinkedIn. The site’s reputation as secure was damaged greatly by the hack of 6.5 million user passwords last year, so, perhaps understandably, people have been sceptical of how safe Intro is.

Blog posts like this one at security consultancy Bishop Fox lay out several perceived problems – such as that it appears to break cryptographic email, that it could mean you waive your legal right to attorney-client privilege in private correspondence, that it could violate your company’s security policy, and that LinkedIn is generally quite vague about the details of how Intro works – have forced LinkedIn onto the back foot.

Cory Scott, LinkedIn’s senior manager of information security, has written on the company’s blog to try and reassure users that Intro is nothing to fear. He writes:

Many things have been said about the product implementation that are not correct or are purely speculative, so this post is intended to clear up these inaccuracies and misperceptions.

When the LinkedIn Security team was presented with the core design of Intro, we made sure we built the most secure implementation we believed possible. We explored numerous threat models and constantly challenged each other to consider possible threat scenarios.

Scott claims that an outside security firm – iSEC Partners – has gone through Intro’s code “line-by-line”, and that Bishop Fox was incorrect to claim that Intro breaks cryptography.

However, take a look on social media, or through reddit, and you’ll see people making a point that it’s harder for LinkedIn to refute: even if Intro is secure now, social networks are notorious for updates that render things insecure, or things that were once private no longer being so. Not saying that LinkedIn would do this deliberately – obviously, they wouldn’t – but mistakes happen. And for many, Intro looks like it could be a pretty terrible mistake in the waiting.