One of the ironies of the Daily Mail’s smearing of Ralph Miliband – “the man who hated Britain” – is how vulnerable the paper, with its loathing of multiculturalism, the BBC, the welfare state and immigration, is to the same charge. On his LBC phone-in this morning, Nick Clegg became the first politician to make this point, and did so brilliantly.

The Lib Dem leader and the Mail have, of course, never seen eye-to-eye. At the height of Cleggmania, the paper ran a memorable hit-piece accusing him of a “Nazi slur on Britain”. 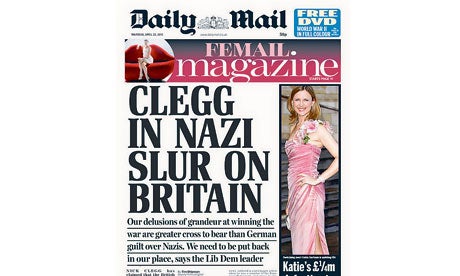 The smear was based on a 2002 Guardian piece written by Clegg in which he wrote: “All nations have a cross to bear, and none more so than Germany with its memories of Nazism. But the British cross is more insidious still.

“A misplaced sense of superiority, sustained by delusions of grandeur and a tenacious obsession with the last war, is much harder to shake off. We need to be put back in our place.”

In the case of Ralph Miliband, the paper similarly misrepresented his words, in this instance an adolescent diary entry, to claim that he hated Britain (the similarity between his and Clegg’s observations is striking). As a 17-year-old Jewish refugee, Miliband wrote: “The Englishman is a rabid nationalist. They are perhaps the most nationalist people in the world…You sometimes want them almost to lose [the war] to show them how things are. They have the greatest contempt for the continent. To lose their empire would be the worst possible humiliation.”

The earlier Clegg affair is a reminder that the paper has form in this area and that its past support for fascism has never restrained it from lecturing others.