This is an online extract from this week’s New Statesman magazine, published on Thursday 3 October.

My grandmother left Germany for England at the end of August 1939. She was able to leave because the Nazi official who stamped her passport once a week had taken a liking to her and warned that the following week they would be confiscating Jews’ documents. She was only able to enter England because a friend had gone ahead and procured her a false offer of work, such were the British laws designed to keep out undesirable “aliens”. She wasn’t to return to Germany until some time in the 1950s.

When she did go back, it wasn’t to Berlin, where she had spent most of her youth, but to a provincial town – and she was accompanying my grandfather on a business trip, with children in tow. (Such trips doubled as family holidays, since my grandfather’s business was frequently in crisis.) At some point they stopped in the town square, perhaps at a cafe: of course, I only heard this story from my grandmother decades later, and now, nearly 10 years after she died, the details even of her anecdote are hazy to me. The two children, my mother and uncle, were left to run around in the square, while my grandparents sat down. As they were doing so, a German woman turned to them, smiling, and told her: “was für schöne Kinder” – what lovely children. My grandmother felt an intense flash of anger, although all she did was sarcastically mutter “Judenbälge” – Jewish brats – under her breath. What went through her mind, as she later told it to me, was: “Twenty years ago, you’d have spat at them.”

She had a lot of stories about her past: and most of them were funnier, or sadder, than this one. But her description of what she felt at that moment has always stuck with me. It would have required a huge erasure of memory to feel anything else.

I’ve thought about this story twice in the past week. The first time was when I saw the photographs of Golden Dawn’s senior members being led in handcuffs to police cells. The sight of the neo-Nazi group’s leader, Nikos Michaloliakos, with arms outstretched, his expression contorted into a mixture of fear, contempt and injured pride, has provided a moment of collective relief both inside and outside Greece.

Online, the photograph of Michaloliakos – he stands, facing the camera, with outstretched arms clutching a briefcase – was gleefully detourned by Facebook users. He has been likened to Davros, the shrivelled creator of the Daleks; to Psy of “Gangnam Style” fame; to the Penguin from Batman Returns. The jokes are good. Even for an outside observer like me, it’s gratifying to see the man humiliated. To those residents of Greece who have had to watch the rise of fascism on their doorstep, I can only imagine the elation.

Yet it would be disastrous to assume that just because the symptom of a crisis has been tackled, however temporarily, that its roots have disappeared. I stopped finding the meme funny when details of the indictment against Golden Dawn – accused of being a criminal organisation by a justice system that suddenly appears to have discovered evidence of alleged crimes dating back years – began to filter through to English media. Chief among them was the allegation that Golden Dawn may be linked to the disappearances of more than 100 migrants, all of whom are presumed dead. Greek-speaking Twitter users were quick to bring up a gruesome story from May, in which the dismembered bodies of Asian men were found at an Athens rubbish dump. It may or may not be linked, but what’s clear is that many such crimes were happening in plain sight.

This made me think back to an encounter I witnessed a year ago in Athens. I had just been out to the suburbs to interview a family of Afghan refugees, and was making my way back to the centre by metro. The story they had told me was disturbing enough: penniless since the husband had lost his job after being hospitalised by a racist attack, the wife was forced to scavenge in bins for food under cover of darkness. Such was her fear of abuse from neo-Nazis, from the police, from members of the public – they didn’t make much of a distinction – that she would only go out as part of a group, with other Afghan women who found themselves in the same situation.

But the shock came on the journey back, as I was standing on a crowded escalator at Syntagma station. A man of African origin was standing just in front of me with his tiny son who, although he barely came up to knee height, was dressed immaculately in a black suit, bright white shirt and tie. I don’t need to go into great detail to tell you how cute a sight it was. The boy, standing ever so slightly unsteadily on his feet, but dressed like a man, was kept from falling by his father’s hand on his shoulder. Two middle-aged Greek ladies in front of us had turned round and were looking at the child and smiling. I started smiling. I caught their eyes. We smiled at each other. Then I remembered my grandmother’s story.

I don’t mean to imply that the women, who I did not speak to, would have expressed racist views in another setting. The shock was at seeing “normal” life continue in a city where I had just seen people so desperate and under such pressure. Still, I haven’t been able to get it out of my mind since.

The second time I thought about my grandmother’s story was when reading the Mail’s hatchet job on Ralph Miliband, headlined “the man who hated Britain”. A far more trivial affair than the events in Greece, but unsettling nonetheless. To me – regardless of the author being one “Geoffrey Levy” – the piece drew its venom from a well-worn anti-Semitic stereotype: that of the rootless Jewish subversive who hates his or her adoptive country and even works to undermine it.

Britain’s own history of anti-Semitism is something conveniently obscured by its heroic self-image of being the country that defeated Hitler. Yet that anti-Semitism existed, and its traces are still discernible today, even if it largely remains beneath the surface of polite society. The Mail would no doubt aver that it was attacking Ralph Miliband’s Marxist politics, and not his ethnic origins. But the message of that piece was that those politics were not merely objectionable; they were deeply sinister because they were foreign and did not belong here. The subtext, further reinforced by the way the paper worded its refusal to apologise for running the piece, is that there’s something foreign about Ed Miliband himself. Never openly said, of course, but a series of snide digs that say – watch it, Ed, you’ll never be fully British and don’t you forget it. 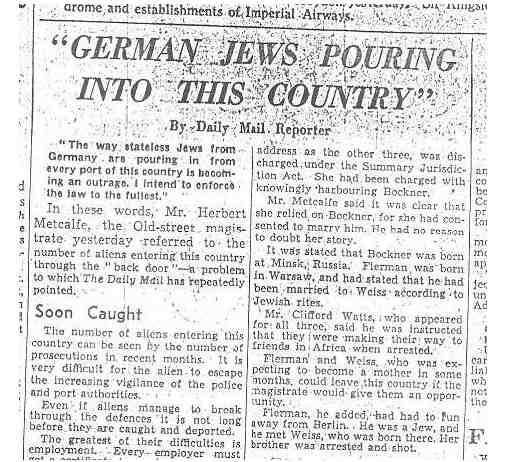 Ed Miliband’s response has been defiant, and brave. Until now, I haven’t particularly liked the way he has used his father’s refugee story, which he first aired in a piece for the New Statesman in 2012. I can understand the desire to engage in current debates about immigration, to make a powerful argument that people born abroad belong here as much as anyone else. But it seemed to be contorted for immediate political gain, to bolster the Blue Labour-inflected take on patriotism that Miliband thinks will help him win an election in 2015. Would Ralph Miliband really have seen himself as a “patriot” in the way his son describes? We’ll never know. Just as I will never know whether my grandmother became an ARP warden and ran out into the streets to throw sand on top of incendiary bombs before they exploded out of love for her adoptive country, or simply because she didn’t want to be burned alive. Should it matter?

To me, the stories I’ve had passed down from my grandparents – who were not all Jewish, but Irish and English, too – means saying that “my country” is never enough. Despite the unpleasantness the Mail has stoked up this week, Jews in Britain are safe, secure and thriving. But we are not so far from a time when even here they were treated as undesirables, when right-thinking people preferred to ignore what was happening, and to forget about it as swiftly as possible after the event.

There are people who find themselves in a similar situation today: they are the migrants who fall from the undercarriages of planes, or who disappear into detention centres where they are thensexually abused, or who drown in boats in the Mediterranean, or who have been targeted by paramilitary-style attacks in Athens. It’s the result of a system that has been constructed by European governments, including Britain – and it is perpetuated because we have largely convinced ourselves that these are “non-people”.

Stress patriotism too heavily, and it can end up sounding like those who fall on the wrong side of the line – the illegitimate, the rootless, the “illegal” – have got something to be ashamed of. Yet not belonging is also a strength: it frees us to say that wherever injustices happen, it’s our business too.