At the start of a week in which press standards will come under scrutiny again (the Privy Council will meet on Wednesday to decide whether to approve the industry’s proposed system of regulation or that backed by Parliament), the Sun has shamed itself with its front page today. 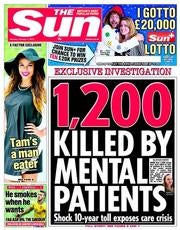 The paper’s headline reads “1,200 killed by mental patients”, a shock figure (printed in blood red) created by compiling 10 years’ worth of data and perfectly designed to encourage further prejudice against mental health sufferers. In reality, since around a quarter of the population experience mental health problems each year, the number of murders committed by patients is disproportionately low. Around 95% of homicides are committed by people who have not been diagnosed with a mental health problem, but you wouldn’t know that from the Sun’s headline. The greatest threat that sufferers pose is to themselves; 90% of those who die through suicide experience some form of mental distress.

Labour’s health team rebuked the Sun on Twitter last night and a spokesperson for Andy Burnham told me:

This is a disgraceful reinforcement of the stigma against those with mental illness. The paper will face serious questions on Monday. Archaic attitudes still define our approach to mental health – we must challenge them.

In addition, Alastair Campbell, who is campaigning for better public understanding of mental health problems, wrote on Twitter: “Will the Sun tomorrow do exclusive investigation on numbers killed by what they would call ‘normal people’?”

He added: “Constant media linkage of violence and mental illness leads to violence against the mentally ill rather than by them.”