Labour’s confidence – what is left of it – rests on a technicality. Britain chooses parliaments, not presidents. Ed Miliband may be fluffing his audition to be prime minister but electoral arithmetic keeps his party within reach of power. The Conservatives can win more votes and still end up with fewer seats. A Ukip surge on polling day would finish David Cameron.

Maybe Miliband will look like a stronger candidate as the obstacles to a Tory victory loom larger. Alternatively, those obstacles will shrink as Miliband’s dwindling authority becomes a crisis of Labour’s self-belief. Judging by the bleak mood in the party ranks on the eve of the annual conference, the latter scenario is likelier.

On the conference fringe, delegates will heap blame for Miliband’s woes on the press. Activists will pray for Ed the martyr, the victim of a tabloid hate campaign more aggressive than those that tormented Neil Kinnock and Michael Foot. Miliband’s allies don’t relish the comparisons but they are exasperated at the caustic coverage.

Their modest consolation is that a summer of punishing headlines has not eliminated Labour’s lead in the opinion polls and the advantage is strongest in marginal constituencies. “A bucket of shit has been thrown at us,” says one Miliband adviser, “and we’re still where we were in May.” 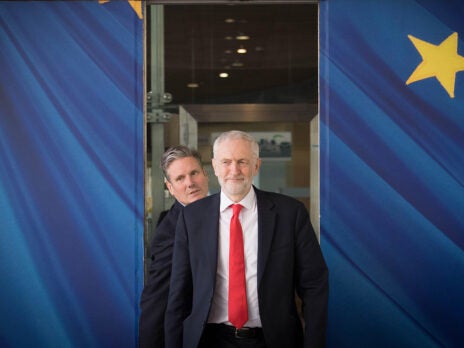 It is true that some newspapers are relentlessly unkind to the Labour leader but newspapers aren’t where most people get their opinions. Complaining about biased reporting is a sign that the party has run out of other excuses. When opinion polls show that voters are unimpressed with Miliband, it is because he has been unimpressive, not because editors have dripped poison in the nation’s ears.

The annual conference is historically when a struggling leader can take back control of the agenda, fire up grass-roots enthusiasm and sell a message to the country that leaves everyone feeling they had rather underestimated him. Except Miliband did all of that last September and then frittered away the goodwill. His “one nation” speech was acclaimed as a game-changer. It was a bit lofty but aides promised the rhetoric would soon be fashioned into an agenda for government. It hasn’t happened. The game changed back.

Miliband’s speech this year is described by friends as “meaty”, meaning it will contain policies. Crucially, they will be things Labour will definitely do if elected, signalling an end to the phase of talking about things the party fantasises about doing today but can’t promise to do tomorrow. That will come as a relief to MPs and activists who complain that cagey holding positions – condemning cuts without pledging to reverse them, for example – are useless on the doorstep.

But Miliband’s task is not to enthuse an auditorium for one afternoon. He needs a plan for capturing voters’ attention and winning their trust over a sustained period. Senior Labour figures know they can get through conference without calamity. It’s the weeks afterwards they worry about. “The test is: are we now going to shift from tactics to strategy?” says a shadow cabinet minister. “The mood is very downbeat, very anxious. But it’s not fatal.”

Signs of economic recovery are ramping up the sense of urgency. The Tories claim their austerity strategy is vindicated and that the opposition has spent three years doom mongering on the wrong side of history. Labour’s rebuttal is that the recovery is late and weak and benefits the wrong people. The focus in Brighton will be on families living precariously on low wages, with no job security and no faith that things are getting better.

Miliband sees the Tories’ declarations of victory over the downturn as economic triumphalism that will alienate the voters. “It’s a mistake we want them to continue to make,” says a senior strategist.

The coalition parties know they are vulnerable on that front. They will start pumping out measures to palliate the squeeze on living standards. The Liberal Democrats’ offer of free school meals to all schoolchildren under seven is just the beginning. George Osborne has already let his deficit- and debt-reduction targets slip beyond 2015 and spelled out cuts to departmental budgets running into the next parliament. In other words, he has probably dished out as much bad news as he needs to share this side of an election. If growth picks up and money flows into the exchequer, the Chancellor can start doling out tax cuts and other vote-wangling goodies.

It still might not be enough to overcome cultural and geographical barriers to a Tory victory. Labour campaigners say Osborne’s cut to the 50p top rate of tax continues to resonate as proof that the Conservatives help their rich friends first. Labour MPs and candidates campaigning in the north, Scotland and the Midlands say hatred of the Tories is enough to overcome reservations about Miliband. “The level of anger is like the 1980s,” says one. “The tribal Labour vote is stronger than the tribal Tory vote.” Meanwhile, the core Labour vote is bolstered by angry ex-Lib Dems who feel betrayed by Nick Clegg, while the core Tory vote flirts with Nigel Farage.

That is an account of how Miliband could be prime minister, not a reason why he should be. There has been little transfer of allegiance between the two big parties. One recent opinion poll found that in a sample of 1,000 people who backed the Tories in 2010, only four said they would now vote Labour. Those numbers describe a failure to win arguments in the country, which has demoralised the opposition. “We’re in with a chance,” says one frontbencher. “I can’t put it more strongly than that.”

The gloom is contagious. If Labour doesn’t think it has earned its electoral advantages, it will surrender them. Miliband desperately needs to persuade his party it can win on more than a technicality because, in most other ways, Labour looks ready to lose.